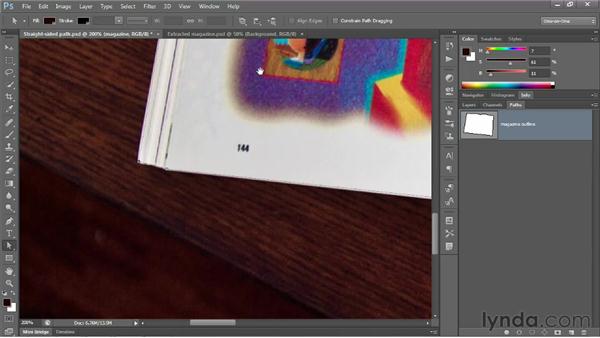 In this movie, I will show you how to edit an existing path outline by dragging and nudging points to different locations, as well as deleting anchor points, and adding new ones. Now, your primary method for editing path outlines are your arrow tools. So if I Click and hold on this black arrow, we have got the Path Selection tool, which selects entire paths. I call it the black arrow tool, because that's what it looks like. And we've got the Direct Selection tool, which allows you to select and modify independent anchor points. I call it the white arrow tool, because that's what it looks like, particularly after you select the tool; you can see the cursor appears as a white arrow.

And even Adobe thinks of them as being the arrow tools, because it went ahead and assigned the keyboard shortcut of A for arrow. So you can press the A key to select whichever is the last arrow tool you used, or you can switch between the two arrow tools by pressing Shift+A, as you can see here. So Shift+A switches me to the white arrow tool, and then Shift+A switches me back to the black arrow tool. If I click on this path outline here with the black arrow tool, then I am going to select the entire thing, which is great if you want to move the entire path to a different location, or otherwise modify the whole thing at a time, but we need more control than that.

We need to be able to move the anchor points independently. So I am going to press Control+Z, or Command+Z on the Mac, to undo that movement. I am going to go ahead and zoom in here, and I am going to press Shift+A in order to switch over to the white arrow tool. Now, at this juncture, to select an independent point, you are going to have to click off the path outline to deselect it, and then click on the path outline again to make it active. Now that I have access to the independent anchor points, I can go ahead and drag them around, like so, and I can move any of the points I want, of course.

I am going to click on this guy on the center, and nudge him down a little bit by pressing the down arrow key, a couple of times, and then I'll go ahead and toss the image over to this point here, and I will click on this anchor point, maybe nudge it up a little bit, grab this guy, and nudge him up and over, and then select this guy, and nudge him a bit as well. So notice I am cheating into the magazine, because generally speaking, it's better to select too little of an image element than too much, because if you select too much, you'll end up with edge fringing from the old background.

Now when dragging anchor points around, it's important that you drag directly on the point. If you drag a little off, like so, you'll end up dragging the entire segment around, as you see me doing here, which can be useful, by the way. When working with straight-sided paths, you can drag entire segments to different locations, or if you like, you can select a group of points. For example, I will go ahead and marquee all four of these points here, and then I could nudge them as a group by pressing the arrow keys. All right, I am going to go ahead and scroll down here.

I am just interested in taking care of the corners of the magazine at this point. We will come back to those curving edges of the pages in just a moment. All right; that point looks like it's in a good location. This guy wants to come over a little I think. This guy wants to go down to probably about here, and otherwise I think we have got things where we want them. All right, now let's take a look at removing and adding points. Now, if you select an anchor point, like so, and then you press the Backspace key, or the Delete key on the Mac, you will not only delete the point, but you'll delete both of the segments associated with that point, and you'll end up leaving a hole in your path outline.

That's clearly not what I want to do. So I will press Control+Z, or Command+Z on the Mac, to bring that point back. What I would like to do is remove the point without creating a hole, and you can do that using the Delete Anchor Point tool. You don't actually have to select that tool, because its functionality is built into the standard Pen. So I am going to go ahead and select the Pen tool once again. And notice this check box up here in the options bar: Auto Add/Delete, and what that allows you to do is the following; when a path outline is selected, you can hover your cursor over an existing anchor point, and click in order to remove it, without creating a hole in the path outline.

I will go ahead and subtract this one as well, because neither of those points were doing me any particular good. Notice now, if I hover my cursor over a segment, as opposed to an anchor point in a selected path, then I get a little plus sign next to my cursor, and when I click, I go ahead and create a new anchor point. And the great thing about this anchor point is that it's a smooth point; it includes these round control handles on either side, and that means that I can add curvature to this path outline. I will go ahead and click here as well, and then I will press the up arrow key in order to move that point into the proper location, and then I'll press the Control key, or the Command key on the Mac, to temporarily access my white arrow tool, and I will drag this anchor point up, like so. And notice, we now have curvature associated with these segments.

I am not going to modify the control handles right now. I will show you how to do that in the next movie. In the meantime, let's go ahead and take care of the right-hand page. I'll click on each one of these anchor points to subtract them, and then I will click along the segment in order to add a couple of smooth points that are more or less positioned equidistant from eachother. And then I will press the Control key, and drag this anchor point up; that would be the Command key on the Mac, and I will drag this guy up as well, to about there. And again, we will address the curvature of these segments in the next movie.

That is to say, how you move points, how you nudge them, how you remove points that you don't want; how you add new ones as well. In the next movie, I will show you how to modify the curvature of the path outline by adjusting control handles.