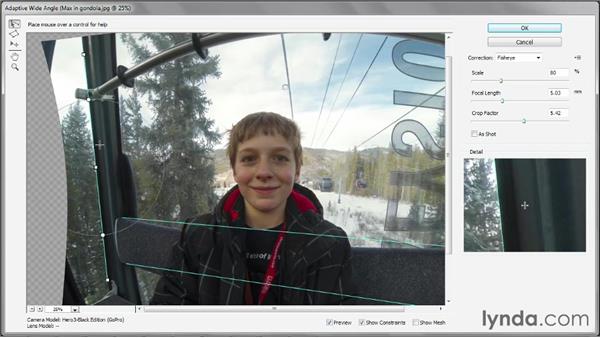 In this movie, I'll show you how to correct an image for which Photoshop has no lens profile. For example, I captured this using a GoPro Hero 3. And those cameras, if you've ever seen them, they're really tiny, and they have no viewfinders. And as a result, they have to be super wide-angle in order to catch all the action. And so I have the camera about, maybe five inches from my son's face, and as a result I've got this fish eye effect. So the first thing I wanted to do is convert this image to a new layer, and I'll just go ahead and call it Max, for my son.

And then, right-click inside the image, with the Rectangular Marquee tool, and choose Covert to Smart Object. Then, once that's done, go up to the Filter menu, and choose Adaptive Wide Angle, and notice, that instead of being set to Auto, as before, the Correction setting is Fisheye. Now, you can experiment with these other settings if you like, but, Fish Eye is what we want for this image. Notice that it's automatically reading the focal length which is a mere 2.77 millimeters. It does have a very small image sensor as well. And that's a function of having this As Shot check box turned on.

I want you to notice something here. If I go ahead and reduce the scale value, to, for example, 80%, notice this crop factor here, notice we have these spikey edges, and if you were to increase the crop factor, then you will crop less in the corner region of the image, but you'll also apply less in the way of distortion correction, which is not really what we want. So I'm just going to turn As Shot back on, and then, I'm going to use my constraint tool. So I'll zoom in on the image a little bit, and I'd drag along the top of the seat.

And notice, because there's no lens profile, the filter does not accurately trace that edge the way that it did for that city hall image. Fortunately, we've got this little center point now, and you can use that center point to accurately track the edge of a detail inside the image like so. Alright, now I'll go ahead and add another line along the bottom of this ridge right here. And you can tweak it if you want to, but if you do, you may end up rebending the top of the seat like so. And for my money, I mean, it looks best to me, if the top of the seat is straightest thing in sight of the image. Now we come to a point where we're not necessarily going to get our way. Notice this bending vertical attribute here. If I were to drag a line along it like so, and then modify the placement of that center point, in order to straighten that vertical element, then I lose the straightness of the seats, which is not what I want. So, I'm going to press the Alt key, or the Option key on the Mac, and click on that vertical line in order to get rid of it. And then, I'll go ahead and drag these guys back into place, which is a little bit tedious but this is the way it works.

And then finally, notice this bending bar at the top of the image. You could try to straighten that out if you want to, like so, but again, if I get this detail right, if I get it nice and straight, I lose a little bit of the straightness associated with this back of the seat here. So what I decided to do was just go ahead and crop this top element away. But if I do that I've got a couple of problems. First of all, I make that top edge of the seat bend ever so slightly, and if I try to fix that, then I'm probably going to wreck this this up here which I've done.

Also, notice how much these lines are bending now. So what I decided to do instead was just to crop this element out. So I'll press the Alt key, or the Option key on the Mac, and click on that line in order to delete it. Now I'll go ahead and drag the top of this line up just slightly. Notice that the lines holding up the gondola here are now straight ones again. And then, I'll restore my scale value to 100%, and press the Tab key, in order to increase the size of the image, and then I'll click OK, in order to apply my effect to the smart object.

Next I'm going to go ahead and switch over to the crop tool, which of course, you can get by pressing the C key. And I'm going to drag this edge down like so, until it's just below the bar, and I'll go ahead and drag this corner up to this location here. And then, if you really don't want to see any distorted details whatsoever, you could crop out this vertical element over here on the left hand side. And notice up here in the options bar, Delete Cropped Pixels is for some reason turned on, but it doesn't matter, because we are working with the smart object, there is no way to crop it with a crop tool. You always hide pixels when your working with the smart object. Alright, so I'll go ahead and press the Enter key, or the Return key on a MAC, in order to accept that change.

You'll have to wait a moment for the preview to update, by the way. And then, I'll switch back to my Rectangular Marquee tool, and I'll press the F key a couple of times in order to zoom in on my image. And just so we can see what we've managed to do here I'll press the F12 key, in order to revert the image. That's the original amazingly bending seat right there. And then if I press Control Z, or Command Z on the Mac, that is the straightened version of the image, created by establishing manual constraint settings, using the adaptive wide angle filter.

3/27/2013
Join industry expert and award-winning author Deke McClelland in the fourth and final installment of his popular Photoshop CS6 One-on-One series. In this course, Deke puts his own spin on the most powerful features in Adobe Photoshop, including the Art filters, which enable you to transform an image into a digital painting, and Photomerge, which can stitch together multiple photos into a single panorama. Plus, dive into the extended features like 3D lighting effects, the Puppet Warp and animation toolset, high dynamic range (HDR) imaging, video editing, automated adjustments with actions, and much more.
Topics include: