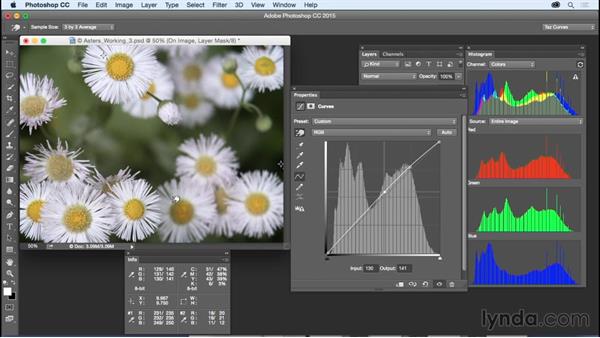 - In this third exercise, once again we're going to tick off from a previous position where we've started to adjust the image. In the first two exercises, first we did a highlight and shadow adjustment right on our image to improve the overall brightness and contrast, and then in the second one we did a general contrast improvement by moving the midtone up and then the quartertone up and then the three-quartertone down. I'd like to show you a little bit different approach which very often will net you with better final results. And this is called using the On Image adjustment capability.

Instead of just kind of taking the standard midtone, quartertone and three-quartertone, which obviously works pretty well, we got a good improvement on there, you can use the On Image tool to really focus the adjustments on specific areas of your image. Let me show you how. First of all, let's go ahead and turn off our contrast curve. Let's leave the highlight and shadow, and let's create another curve with Option or Alt and click and then we can name this. We'll call this the On Image adjustment.

And in this case, what we're doing to do, we're still going to affect brightness and contrast, but we're going to activate this tool right here. This is called the On Image adjustment tool. What this allows us to do is achieve an adjustment by clicking on specific areas of the image and lightening or darkening those areas of the image. And it's very easy to use. So I'm going to click on this. You can tell it's active by the fact that it's kind of depressed, it looks three-dimensional when you click on it. Alright, so we're going to move this down. We'll just move this over here, and we're going to go ahead and watch our histogram flood just like we did before, but in this case we're going to click on specific areas of the image. And notice up here where we set the highlight, as we move our cursor around the image, watch over here on the curve.

You'll see a little open circle. Do you see that? It shows you where you are in the image. Here we're way down in the shadow, here we're up in a three-quartertone, and here we're up in the quartertone. Right over here we're moving down more into the midtone area. So if we know we want to look at the image and say "geeze, we'd like those flowers to be to be a little bit brighter and maybe keep the background dark to create that nice contrast between foreground and background," well we can move our cursor around our image on the various portions of the image, the various portions of these white daisies, until we find a quartertone area that we like and then we just click.

And notice as soon as we click you can see the hand on screen on the image. Look over at the curve and you'll see that a data point has been created. And then you can just drag up or drag down to lighten or darken. In this case we're going to lighten this. We're going to lighten the flowers as you can see here, in the quartertone. Now you could also choose say, to move down more into the midtone and click on the midtone area here to overall lighten the image. Or if you wanted to darken it a little bit on the midtone.

Totally up to you, whatever your call is. And of course we can come over here and click on the shadow area and notice where the open circle is indicating where the control point will be placed and then you can move that down to increase. And notice how that increases the contrast of the background with the foreground so you get a darker background, really focusing on the portion of the image that you want to be darker. And if you wanted to darken up the three-quatertone, you could click here and pull that down. And see now you're really starting to see the power of Curves, is I can put points anywhere along here and lighten or darken anywhere that I want to.

So it's really, really powerful. Now you can create too many control points, like if you move just a little bit and click another one, you're here where you create another control point, then you start moving that, then you can start to get into trouble, so we'll hit the delete key to get rid of that. That's why you always want to be monitoring what you have here. This is a pretty nice set of points that we've got here. We've got our highlight, we've got our shadow, we've got our quartertone point. We've got one near the midtone which is still on the flower, and then we've got a deep shadow and a three-quarter tone point.

Alright, I can make that a little bit darker. I press the plus key, I can make this a little bit darker. I move up to the midtone by pressing the plus key. And then I'm using my up arrow into the quartertone and up arrow just a little bit more. And I can really fine tune and get just the look and feel that we want. All the while, I'm going to monitor the histograms that we see over here, to make sure that we don't lose any highlight or shadow detail. Those are the most critical things. Now one thing to mention here before we finish up here, is that notice how the histograms are starting to break up.

The more adjustments you do, the more adjustments you apply to the image, the more data breaks you will start to see, and this is one of the reasons why you really want to work not in 8-bit images, but in 12 to 16-bit images, so when you make these kinds of adjustments, you still have plenty of grayscale, or tonal values left in the image. And that's one of the images of working in Camera Raw. Okay, so there's an On Image adjustment and let's go ahead and compare what we had. There's our original highlight and shadow, there's our standard midtone, quartertone, three-quartertone, and then there's our On Image adjustment.

And I like the subtlety of that On Image adjustment that we were able to create. And notice you can create as many control points as you want. Create the control points with the On Image tool and then use that plus key to move from one to the other to fine tune and get just the look that you want.