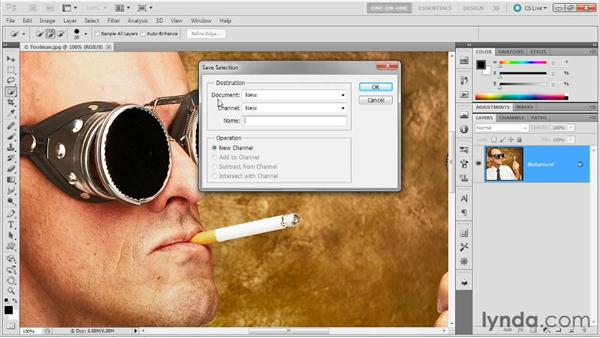 In this exercise I'll show you how to create, save, and modify a very basic mask inside Photoshop. I have open an image called toolman.jpg. It features this guy with these opaque goggles and what I am hoping is an unlit cigarette, because as we all know lit cigarettes are very dangerous for you. We are however going to line up the scene by adding some lasers blasting out of this guy's eyes and ultimately heating up this wrench, and to do so we need to create some selections. So I'm going to start by selecting the dark faces of these goggles and I'll be using the Quick Selection tool which you can get by pressing the W key.

Now as we'll be discussing in a future chapter the Quick Selection tool is rarely the most efficient selection feature inside Photoshop, but in the case of these goggles it performs admirably. So I'm going to go ahead and drag inside the first goggle and then drag inside the second one as well and you just have to paint very tiny brushstrokes in order to select both of those faces. Now one of the great things about working with an Alpha channel is you get a sense for the quality of the selection and as it just so happens the Quick Selection tool is notorious for generating ragged selection outlines.

But you wouldn't know it from these animated outlines that we see on screen now; better known as the marching ants. Insofar as marching ants are concerned we have what appear to be is some near perfect ellipses and I would gather from looking at them that they're smooth as well, but that's hardly the case. So what we're going to do is convert these selections to a mask, and then we're going to smooth them out. Now I'll be showing you the most obvious way to save a selection as a mask in this exercise, and then we'll see some quicker techniques in the next exercise.

But for now go up to the Select menu and choose to Save Selection command. That brings up the Save Selection dialog box. Now you can save the selection to a different document if you want to, you could go ahead and choose New, for example, and that would create a new multi-channel document which might prove useful, for example, if you're trying to share a mask with a team or something along those lines. In my case however I'm going to go ahead and create a new Alpha channel inside the same document toolman.jpg. The channel will be set to New; you can't actually overwrite any of the color bearing channels, which is a good thing.

Then we can go ahead and name that new channel as well. I'm going to go ahead and call it eyes and then click OK. Now let's switch to the Channels panel and you'll see that there's a new Alpha channel at the bottom of the list. Go ahead and click on it in order to select it. We don't need the selection outline anymore. That animated selection and the Alpha channel are exactly the same thing, by the way,. So go ahead and press Ctrl+D or Command+D on a Mac in order to deselect the image and let's zoom in a little bit here and you'll see what I mean by a ragged selection outlines.

We have some big gray jagged blobs around the edges of what should be smooth ellipses. So let's go and fix those edges. Now when you're working with selection outlines, you typically smooth out and feather the selection by choosing commands from the Select menu. When you're working with a mask you smooth and feather the results using filters. To get to the smoothing filter go to the Filter menu choose Noise and then choose Median and if you loaded Deke keys, I have given you a keyboard shortcut of Shift+F8, because this is one of those commands you'll be using on a regular basis where your masks are concerned.

Now by default the Radius value is set to 1 pixel, which is I'm going to do you much good as you can see. But if you take it up to 12 pixels then we get some very smooth outlines indeed. Now go ahead and click OK in order to accept that result. So there is our first Alpha channel, I'm going to go ahead and switch back to the RGB image press Ctrl+0 or Command+0 on a Mac in order to zoom out. In a next exercise we'll create two more selection outlines and I'll show you some quicker methods for saving those selections as Alpha channels that don't involve choosing a command.