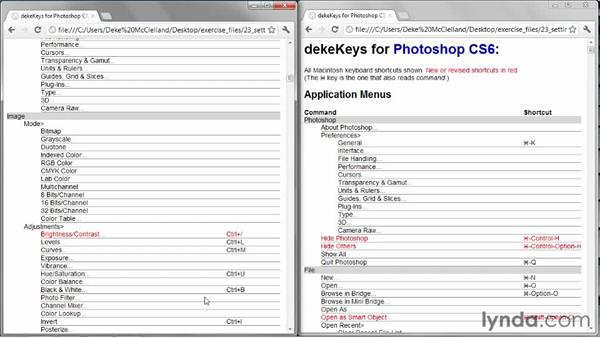 Follow industry pro Deke McClelland as he plunges into the workings of Photoshop, from Smart Objects and sharpening to smart selections.

- [Voiceover] In this movie I'll show you how to load my custom keyboard shortcuts, which are known as dekeKeys, and I'll also walk you through the new shortcuts that are available to you. What you wanna do if you're working along with me is go to the 23_settings folder inside the exercise files folder. And those of you, by the way, who are not premium members, you can still download these dekeKeys from the site. Then you wanna locate the file called dekeKeyspscs6.kys and right-click on it and then choose open with, and choose Adobe Photoshop CS6.

And that'll prevent the shortcut file from accidentally opening inside Premiere. That should go ahead and automatically switch you to Photoshop as it has in my case. Now you won't see anything different until you go up to the edit menu and choose the keyboard shortcuts command. Which as you can see has it's own shortcut of mash your fist K, so Ctrl Shift Alt K on the PC, or Cmd Shift Opt K on the Mac. And you'll see that your set has switched to Photoshop defaults, modified in parentheses. And what you wanna do is click on the little hard drive with the ..., that's your save as icon.

And as you can see, I've already saved a dekeKeys file. I did that back in the intermediate course. I'm gonna name this guy so I don't save over it, dekeKeyspscs6, like so, and then click the save button. You can call your shortcuts anything you like, by the way. And then, just to make sure the shortcuts have loaded successfully, go ahead and twirl open the file menu, and you should see that open a smart object now has a keyboard shortcut of Ctrl Shift Alt O, or Cmd Shift Opt O on the Mac. Assuming that's the case go ahead and click OK, and you now have my shortcuts loaded.

Alright let's talk about what that means. I'll go ahead and minimize Photoshop, and notice in this 23_settings folder, we also have a couple of html files. One is a list of the Macintosh shortcuts, and the other is a list of the Windows shortcuts. I'll go ahead and minimize this folder window as well, so that you can see that I've loaded both shortcut files in the background. And notice that the PC shortcuts over here on the left-hand side and the Mac shortcuts over on the right-hand side are organized differently because the Macintosh version of Photoshop includes a Photoshop menu, which does not appear on the PC.

I've gone ahead and annotated the command key using the cloverleaf character, which actually appears on the keyboard. And I've listed every single shortcut that's available to you, whether I created it or not. My custom keyboard shortcuts appear in red throughout the table. So let's walk through a few of 'em here. First of all, you can open in images a smart object by using that shortcut. Then I've given you a shortcut for the place command as well. And if you scroll down a little bit, you'll see that I altered the shortcut for paste and place to Ctrl Alt V instead of Ctrl Shift V, that would be Cmd Opt V on the Mac.

And that allowed me to assign Ctrl Shift V, or Cmd Shift V on the Mac, to creating a variations adjustment layer. I've given you a shortcut for the stroke command under the edit menu as well, very useful command. And Ctrl Shift P, or Cmd Shift P on the Mac, will now bring up the preset manager. We've got a couple of shortcuts to assign or convert to color profiles. I've created a new shortcut for brightness/contrast, which is Ctrl /, that's Cmd / on the Mac. And if we keep going down here, you'll see right there is Ctrl Alt H, or Cmd Opt H for shadows/highlights.

On the Mac Cmd Opt H, or Ctrl Alt H, normally invokes the hide others command, which is why I've adjusted that keyboard shortcut for you. You just need to add the Ctrl key now, so it's Cmd Ctrl Opt H in order to hide others, and also notice Cmd Ctrl H will hide Photoshop, and that's because Cmd H, or Ctrl H on the PC, hides the selection outline. I've given you a new shortcut for desaturate, which is mash your fist U, so Ctrl Shift Alt U on the PC, Cmd Shift Opt U on the Mac. You can see that we've got a slew of shortcuts for whole image operations, such as rotating the image clockwise, which is mash your fist right bracket, that's Ctrl Shift Alt ] on the PC, or Cmd Shift Opt ] On the Mac.

And that Ctrl Alt Q here on the PC or Cmd Opt Q on the Mac. We've now got Ctrl Shift or Cmd Shift keyboard shortcuts for the best of the adjustment layers. So that should come in handy for you. We've got Ctrl , and some variations, that's Cmd , on the Mac, in order to convert an image to a smart object. And you can see down here Ctrl Alt [, or Cmd Opt [ on the Mac will go ahead and reverse the order of selected alyers. And then finally, where the commands are concerned, I've given you Ctrl Shift Alt A, or Cmd Shift Alt A on the Mac, to flatten the image.

In the past, I've used Ctrl Shift Alt or Cmd Shift Opt F. However that's been reassigned to finding layers inside Photoshop CS6, so my reasoning was the A is for flatten all. I'm gonna go ahead and skip all the way down here to the tools. And you can look through your chart if you like to see what else has changed. But notice that I've given you the N key, to switch between the blur, sharpen and smudge tools, because by default, they don't have shortcuts and the N key goes unused. And then finally, way down here, if you're inside a hue saturation, black and white, or curves adjustment layer, then you have access to this thing called the target adjustment tool.

And I've given it a keyboard shortcut of K, because K was the only key left. Alright, so that takes care of your new custom shortcuts. You should be able to power through the software that much more efficiently. In the next movie I'll show you Macintosh folks how to adjust your operating system level shortcuts, so that they don't interfere with Photoshop, so everybody gets along. Those of you working on the PC can skip ahead to the movie after that in which we'll take at look at preference settings.