Lighting and shooting the stack of towels 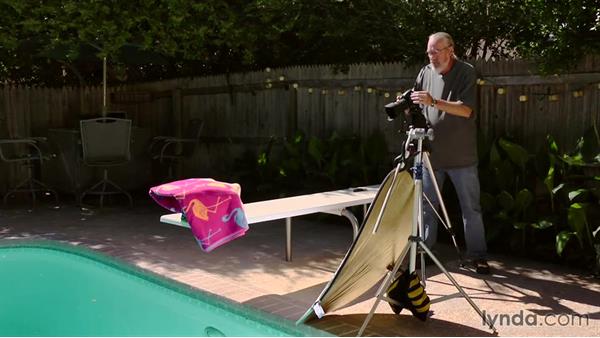 Join Konrad Eek for an in-depth discussion in this video Lighting and shooting the stack of towels, part of Product Photography: Clothes and Textiles.

Okay, we styled this pack of towels indoors, in the blessed air conditioning. We'e now out pool side, we've got the stack that we've put together is here, set on the diving board, and then we have the camera already set in an angle that take in a little leading, leading line from the diving board itself and then has a pretty tight crop around it, so we really see nothing but the blue water or the pool behind the towels. We talked, when we were styling, about adding this fourth towel as a drape to flow over the other three.

I'm going to have that fold just wrap neatly around the edge and come to the front. See, you can see, we see border, border, border, and then this border flows down to kind of lead you around in the shot. We're tying to generate sort of circular motion, where we trap the viewer's eye and keep them looking at the shot. The foam core we've added is helping this top towel stay rigid so we get a nice glimpse of the flamingo pattern in the top of the tower. So now I feel like we're styled and ready to go.

In looking at the lighting we're going to have to deal with, I don't even have to see it, and I can call out that the bright light on the top is at is just balanced with this really dark shadow on this side here. Any time you're working in direct sunlight, the sunlight to shadow ratio is going to be really strong and typically be too much for good rendering ff the product. That's one of the problems working with sunlight. This is going to be a pretty simple fix. I'm just going to come around and we're going to use a reflector to bounce some sunlight back into the shadows that we have over here.

So I just got one of these little expandable disks with a silver reflector and if you look, when we come over here. And catch a little sunlight and bounce it right back in. You see how those deep shadows just vanish, and we have them on this side here, but most important you need to remember where camera is coming from. The shadows on the front of the towels, in a lot of ways, are more important and what's easy for you to see from camera right over there. So I'm going to focus on making sure, this hits the parts I need right up here in the front and once I get this where I want it, I'm going to lock it down in position with a couple of grip clips.

So I'm going to put one here, to hold it here, and then I'm going to put a second one down here to hold it. And so I've got that locked down. Normally I could just hold onto this and use the self-timer, but there's one other thing I want to do in addition to this to help make this shot as pretty as possible. You'll notice the surface of the pool water is pretty still today. It's a rare wind-less day in Oklahoma, and so I want to rile that up a little bit.

So what I'm going to do is come back over here. I'm setting aperture priority mode and I'm setting the aperture at F56 and I'm double checking with a depth of field preview which is, most cameras will have this. It's a button located somewhere that stops down the diaphragm of the lens to the f-stop you selected and I want to make sure that the towels are sharp from front to back in my shot, but I want the pool in the background to go out of focus so the specular highlights we get from the moving water will be these wonderful kind of bright little hexagons.

So, depth of field preview. I like what I'm getting. So I'm going to go ahead and go to the self-timer mode. I'm going to trip the shutter. I'm going to come grab this little tool, and I'm just going to run it through the water, and I didn't get here quite quick enough. I heard the shutter trip before I got that swept. So I'm going to start on this side of the board and move a little faster. Trip the shutter. Move the water. And there, I think we've got the shot. going to give it a second to copy over to the card. And once it's finished writing to the card. One of the problems of shooting in bright sunlight like this, you notice I am not tethered, reason being, in sunlight this bright it's really hard to see the surface, the screen on the laptop.

It's also really hot. So we're going to go over to the cool of the tiki bar and take a look and see what we've got. When I examined the image on the laptop screen, I noticed a few problems that I wasn't able to see through the viewfinder. Once again, an important reason to always take the time to look at these shots on a big screen and really study em before you wrap up for the shooting. What I saw were a couple of things, first, in my styling here, the bottom layer of towel is actually catching enough light that it makes kind of a distracting line in the image that I want to get rid of.

The other thing that's happened in the way this loop of border comes over the front, it's throwing a large shadow down here below it that is trapped, that my fill card's not getting in to. So I want to slightly alter the styling to limit that trapped shadow, and I also want to slightly alter the camera position in order to eliminate the shadow line that's in the pool. As the sun's slowly moving to the west, there's a line of shadow that's coming across the bottom of the pool, and that's encroached my shot a little bit and I want to get rid of that.

So, first let me address the styling change, I'm just going to move this border back a little bit, to let that fill fill in, I'm folding back that one part of the towel. And actually bringing the other part down a little bit more. And then I'm going to tug on this and try to clean that up a little bit down there. I come back and adjust my camera position now. Okay, I like that a lot better.

I'm making a much more careful visual inspection of the styling through camera now, and then I'm going to come over and adjust my fill. To make sure it's hitting as much as it can of that shadow to open that up. Okay, I like that. One last inspection through camera. This little area here, I'm going to pinch together just a little bit. Okay. The other thing I noticed too, in the metering, it's averaging out all the illumination and the screen and trying to figure out what's best. And because of that dark shadow it threw the meter off a little bit and the bright sunlit area on the top towel was a little bit overexposed.

So I'm going to use my exposure compensation control And dial the exposure down to minus 1 3rd and that should bring the tonality back into the top. I just saw one little thing I don't like very much. We've got a little volunteer model there in the shot. I think that was a little gnat that wanted his 15 minutes of fame. Okay, I like everything, I'm seeing there, once again I'm on self timer in aperture priority mode, so I'm going to start the timer and go stir up the water and then we'll walk over to the shade to take one more look.

1/13/2014
Photographing textiles, whether a shirt or a handmade quilt, requires careful styling and lighting to accurately show the texture of the fabric and the way it folds and drapes—and to make it look as beautiful as possible.

In this course, commercial photographer Konrad Eek explores the creative and technical decisions involved in photographing textiles. After introducing basics, such as ironing and folding, the course explores a variety of shooting scenarios, including photographing a garment on a slant board or against a wall, a blanket draped on a chair, and a stack of clothing. Konrad demonstrates basic lighting techniques as well as more advanced ones, such as using a cookie (also called a gobo or cuculoris) to cast dramatic shadows. The course concludes with a brief overview of the Adobe Photoshop post-processing often involved in textile photography.

Video: Lighting and shooting the stack of towels