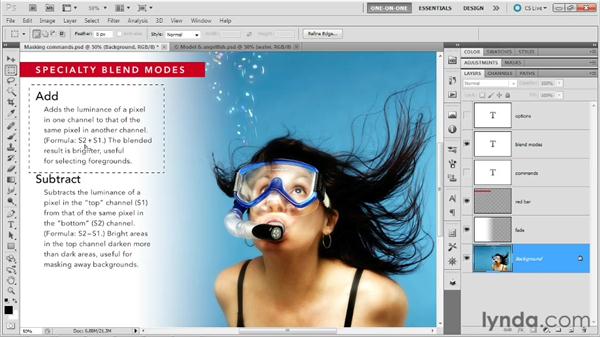 In this exercise, I'll introduce you to the topics I will be discussing throughout this chapter. Mainly two commands; Calculations and Apply Image; two Blend modes; Add and Subtract; and then two numerical options, Offset and Scale, all of which are uniquely suited to masking hair and other details inside Photoshop. It's a lot to take in, which is why we'll be discussing all of these options in more detail in future exercises. Let's start off with the two commands, Calculations and Apply Image.

Calculations lets you blend two channels to create a new Alpha Channel that will serve as the basis for a mask. So instead of trying to create a mask exclusively from the Red Channel or the Green Channel, for example, you can blend those two channels together to create a better base Alpha Channel. Meanwhile, the Apply Image command blends the channel with the active channel or an independent layer. Now, I should mention, both of these commands are found in the Image menu and they're both pretty similar to each other in the way that they are structured.

In other words, the dialog boxes look a lot alike, which is why even very advanced Photoshop users sometimes have problems telling them apart. The similarities between the two commands are that they both blend channels to facilitate masking. The differences are that the Calculations command generates a new channel or selection, while Apply Image modifies an existing channel or layer and it respects the selection. In other words, the Apply Image command goes ahead and modifies the contents of the selected area of the image.

Both of these commands provide access to all of the Blend modes that we discussed back in the Advanced Blending course. However, there are two unique Blend modes provided by both commands and those Blend modes are these, Add and Subtract. Add is a lightening mode, like Screen and the others; while Subtract is a darkening mode, like Multiply and so forth. Add goes ahead and adds the luminance of a pixel in one channel to that of the same pixel in another channel. These channels are known as Source 1 and Source 2, and strictly speaking, for what it's worth, the formula is Source 2 plus Source 1.

The blended result is brighter, useful for selecting foregrounds. Because after all when you brighten a portion of a mask, you add to the selected region. The Subtract mode is exactly the opposite. It subtracts the luminance of a pixel in the top channel; Source 1, from that of the same pixel in the bottom channel, Source 2. So the formula is Source 2 minus Source 1, for what that's worth. The bright areas in the top channel darken more than the dark areas. So in other words, when you have white in the top channel, that's going to darken absolutely; black will not darken at all, so black becomes neutral, making the Blend mode useful for masking away backgrounds, because after all you're adding to the dark area of the mask, so you're masking areas away.

Now, strictly speaking, these Blend modes are not unique. After all, Subtract is a Blend mode that's found in the layers panel and Add is exactly the same as the Linear Dodge mode. What makes them unique where Calculations and Apply Image are concerned is that you can mitigate their behavior using a couple of options. And these options are Offset and Scale. The Offset value adds or subtracts a constant amount of luminance. That is, you enter say a 100, and you're going to add a 100 luminance levels to each and every pixel in the blended image.

So for example, if the Add mode results in an overly bright effect, which it most assuredly will, then you can enter a negative Offset value to deepen the shadows. Also worth noting, the Offset value results in sharper transitions inside the Alpha Channel. Whereas, the Scale value goes ahead and divides the blended result by as much as two. So you can enter any value between one and two, including decimal values, by the way; The result is always a dimmer image. So you're always darkening the composite image, and it includes softer transitions than you can achieve using Offset on its own.

Now, I realize that's an awful lot to take in, which is why we'll be discussing Calculations and Apply Image, as well as the Add and the Subtract modes, and the Offset and Scale values in more detail in the following exercises.