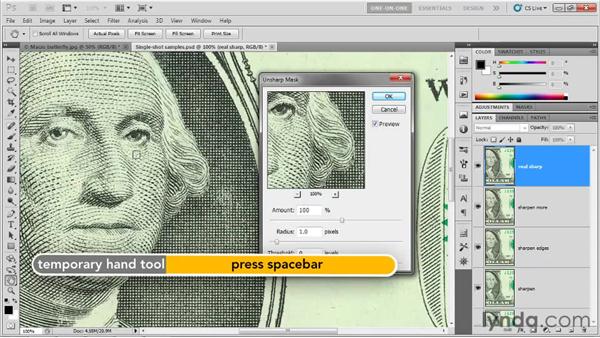 In this exercise, I'm going to introduce you to your primary sharpening tool inside of Photoshop, and that's Unsharp Mask. If you learn nothing else about how to sharpen inside the program, you want to learn how to use this one filter. I'm working inside of a document called Single-shot samples.psd. It features each of those three commands, sharpen, sharpen edges, and sharpen more applied to independent layers. I'm going to go and click on the real sharp layer, and turn it on. This layer has not been affected so far. Now I'll go up to the Filter menu, choose Sharpen, and choose Unsharp Mask, this guy right there.

Now notice that if you've loaded dekeKeys, I've assigned a keyboard shortcuts to a few of the filters. Basically, the filters that I use the most often inside the program. Starting with Shift+F5, and it goes all the way to Shift+F12 for the minimum command right here. But what I want you to really note is that Unsharp Mask is the first guy to receive a keyboard shortcut. That's because, once again, it is the most essential Filter inside the program, the one you really want to learn first. So I'm going to go ahead and choose that command to bring up the Unsharp Mask dialog box.

Now you may will ask, well, why in the world did Adobe choose to call the most essential sharpening function inside the entire program Unsharp Mask, which makes no darn sense whatsoever. It's named after a traditional darkroom technique and it actually works its way inside of Photoshop as well. So the idea is that Photoshop really is incapable of sharpening an image. We discussed how it can't generate detail, but it can break down detail.

So what Unsharp Mask is actually doing, is it's blurring the information inside the image. I know that just doesn't sound possible at all, but it's using the Gaussian Blur filter inside of a masked environment. So it's using the edges inside the image to mask the effects of Gaussian Blur, hence Unsharp Mask. If you want to actually see that it works, you can go to my Photoshop sharpening images series. There are a couple of movies in that series, where I actually build up an exact replica of Unsharp Mask, using nothing more than Gaussian Blur, and this command called Apply Image.

You can see how it works. Now it's not a technique. It's just a demonstration. But frankly between you and me, you don't need to understand what's going on under the hood. You just need to know that Unsharp Mask is the first sharpening filter you need to learn. All right, notice that this dialog box contains a Preview. You can drag the Preview around if you want to. If you click and hold on the Preview, you'll see the Before effect. If you release, you'll see the After effect. You can also Preview the effect out here in the larger image window. You can turn the check box off to send that outside image to its original appearance.

Turn the check box on to preview the settings inside of the background image window. You can zoom, by the way, if you press Ctrl+Minus or Commnad+Minus on the Mac, you'll zoom out the image in the background that is. If you press Ctrl+Plus or Command+Plus on the Mac, you'll zoom in. You can Spacebar-drag the image around if you want to. You can also; by the way, if you want to center the preview here inside the dialog box, you can just click inside the image. Notice that I have a little square here. That goes ahead and centers that area inside the Preview.

All right, now let's visit these three options that are available to you. Even though at first, they're very mysterious in terms of how they work. They're actually fairly simple. There are just three options. That's all you have to work with inside this dialog box, and not a lot to worry about. The very first option is pretty much self-evident. You're either going to apply less sharpening using this Amount setting here, or more sharpening. Already, we're ahead of the game. That is compared with sharpen, sharpen edges, and sharpen more, because we can control the degree of sharpening that we're applying here.

In fact, by the way, sharpen, sharpen edges, and sharpen more are based on Unsharp Mask settings. All right, so that's what you do with Amount. Typically, you vary the Amount value, although not always. This is just a rule of thumb. Somewhere between 50% which is a pretty low amount of sharpening frankly. And about 200%, although I should say that the highest you can go is 500%. There are times where I wish you can go higher with this option. 500% can be very useful for gauging the results of the other settings as well.

Now I'll go ahead and take this value down to let's say 250 for demonstrational purposes. Now let's dropdown to Radius. The Radius value affects the thickness of the halo. I'll explain what's going on there in a later exercise, but the thickness of the halos that are being drawn around the edges. So if I increase this Radius value, notice that I get these big thick halos around all of my edges. So I get these big thick highlights, big thick shadows as well around the edges inside the image once again. The higher you go with the Radius value, the more distributed your Unsharp Mask effect becomes, the more blur you are applying in fact.

The more you're getting something of a clarity effect, less of the sharpening effect that is to say. If you want a super-sharp tactile effect, you want to reduce the Radius value. Again, I'll explain what's going on there in a later exercise. Right now, I'm going to take that Radius value up to 5 pixels. I'm going to move my dialog box over here, so that we can see this area in the background. Notice these little bits of paper texture and these threads that are woven into the dollar bill. Let's say, I want to eliminate them from the sharpening equation. That's the purpose of the Threshold value.

So if I take this value, let's say up to something like, let's take it to 20. Notice that I'm no longer sharpening that paper texture, but I'm still sharpening George's face quite a bit here. What this is saying is go ahead and sharpen two neighboring pixels if they are 20 luminance levels or more different from each other. If they're 20 luminous levels were less different from each other, then don't sharpen the pixels. So if you want to rule out low levels of contrasts inside the image, then you crank up that Threshold option.

So that's how these options work just on the face of them. I think Amount is pretty self-evident. You can work with that one. I'm going to explain Radius and Threshold in more detail, starting in the next exercise.