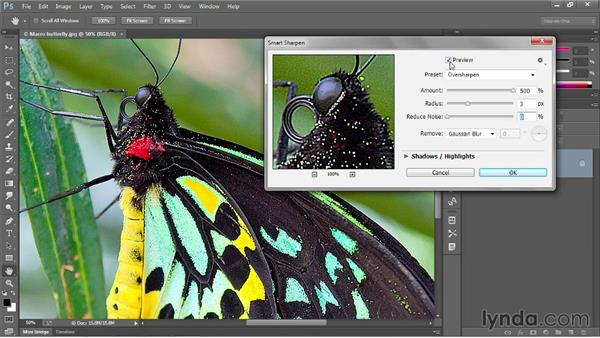 In this movie, I'll introduce you to the Smart Sharpen filter, and I'll also show you how to apply it as a dynamic effect that you can later modify to your hearts content. We're looking at a macro shot that I captured a few years back. And it definitely could stand a little bit of sharpening to bring out these finely wrought details. So, I'll go up to the Filter menu and choose Sharpen. And you can see that that brings up a sub-menu of options. All of which we're going to ignore for now, except for Smart Sharpen. The reason being that sharpen through unsharp mask just aren't as powerful.

These first three commands right there, Sharpen, Sharpen Edges, and Sharpen More don't have ellipses after them. The little dot dot dot, and that means that they don't bring up dialog boxes and therefore they don't give you any control. You just choose the command and hope for the best. And in my case, it barely made any difference whatsoever. So, I'll go ahead and just press Ctrl+Z or Cmd+Z on the Mac to undo that change. Then I'll return to the Filter menu, choose Sharpen. Unsharp Mask is a decent command but it's just not nearly as powerful as Smart Sharpen.

Where as Shape Reduction is an entirely different animal that we'll look at in a future course. So, for now, just go ahead and choose the Smart Sharpen command. And if this is your first time inside the dialog box, then the preset will read default and you'll see these values right here. But for the sake of demonstration, I'm going to adjust the values so that we're over sharpening the image. In that way, you'll just be able to better see what's going on. I'm going to start by changing Remove to Gaussian Blur, because that will just speed things up a little bit.

And then I'm going to crank the amount value, that is the amount of sharpening, to it's absolute maximum, which is 500%. I'm going to take the radius value up to 3 pixels, we'll see what that means later. And I'm going to take the reduce noise value down to 0%. Again, that's going to help speed things up as well, and I'm going to save out my settings as a preset. So notice now, preset reads custom. If I click on this Pop-up menu, I can choose the save preset command. And then I'll just go ahead and name this guy over-sharpen, because we are definitely over-sharpening the image.

It's looking way to crispy on the screen here. And then I'll click Save. You don't have to specify a different location. In fact, you want to save this file inside of this folder right there. Then click Save in order to do so, and you'll see that preset now reads over-sharpen, if you're working along with me. Alright, now notice that we have two previews. One outside in the larger image window. And one inside the dialog box, which might seem a little repetitive. But the nice thing is that they're set to different zoom ratios, so you can get a good sense of what's going on.

If you want to center any point inside the image, inside the dialog box, you just click on it with this square. And notice that re-centers the preview. You can also zoom in on the image by pressing Ctrl+Plus or Cmd+Plus on a Mac. If you wann zoom out you press Ctrl+Minus or Cmd+Minus. You also have the option of pressing Ctrl+Spacebar or Cmd+Spacebar, and clicking in order to zoom in. Add the Alt or Option key and you zoom out. And then finally, if you press the Spacebar, you can drag the image around.

If you want to zoom the preview inside the dialog box, then you click on either this Plus button to zoom in or the Minus button to zoom out. Notice that you can turn off this Preview check box, if you wanted to see the before version of the image outside here in the image window. Turn the preview back on to see the effect. And then if you want to turn the preview on and off inside the dialog box, you click and hold. So when you click and hold, you'll see the before of the image, when you release you'll see the after version. You can also scale this dialogue box, just as you can in the case of the image-size command, and make it quite big indeed.

So, if you'd like to just focus in on the in-dialog box preview, this is the way to do it. And then you would go ahead and click on the OK button to apply the effect. Problem is, that would apply a static modification. So, in other words, you would permanently rewrite those pixels. Which is why, I'm going to go ahead and click the Cancel button to abandon my changes. The better approach is to apply Smart Sharpen as what's known as a Smart Filter. Which you can go back, and edit any time you like. And to apply a Small Filter, you have to turn the image into a Smart Object.

And that's a two step process. The first thing you do, is you double-click on the background item, there the Layers panel, in order to convert it into an independent layer. And I'm going to go ahead and name this guy butterfly, and click OK. And then with your Rectangular Marquee tool active, you right click inside the image window and you choose Convert to Smart Object. And that'll go ahead and place the image inside a protective container. Now, it's not going to look much different inside the Layers panel. It's not going to look any different out here inside the image window.

The only difference at this point is that you're seeing this little page icon right there. Which tells you that you embedded this image inside of this layer. And you know that it's protected, because notice that if I were to switch to the Brush tool and move my cursor inside the image window, I get this little Ghost-buster's icon that's telling me that I cannot modify this image directly. And if I click, I get this warning that tells me that I'd have to rasterize the smart object, that is convert it back to standard pixels. I'm not interested in doing that, so I'll just click Cancel instead, and then I get this additional helpful warning.

I'm being sarcastic I must admit, and so I'll just go ahead and click OK to that one. Alright. I'll press the M key to switch back to the Rectangular Marquee tool. And now I'll go up to the Filter menu, choose Sharpen, and choose Smart Sharpen. And notice that Photoshop has gone ahead and restored the preset to default. But, my preset was saved, so I can go ahead and select it even though I cancelled out just a few moments ago. And now, I can drag this guy around if I want to, or I could restore my dialog box to the small view right there.

And then click on the butterfly's head in order to center the in dialog box preview. And now, I'll go ahead and click OK to apply that filter. And you can see that Photoshop has now applied the filter as a dynamic effect that's available to me here inside the Layers panel. And if I want to modify these settings, all I have to do is double-click on the words Smart Sharpen, and that'll bring back my settings and allow me to change them as much as I like. And I'm not re-applying the settings. Notice that.

I am actually modifying the settings on the fly. Anyway, I'm going to go ahead and cancel out. Because for the present, I want to leave my butterfly over-sharpened. And that's how you work with the smart-sharpen filter, as well as how you apply it as a dynamic, editable effect here inside Photoshop.