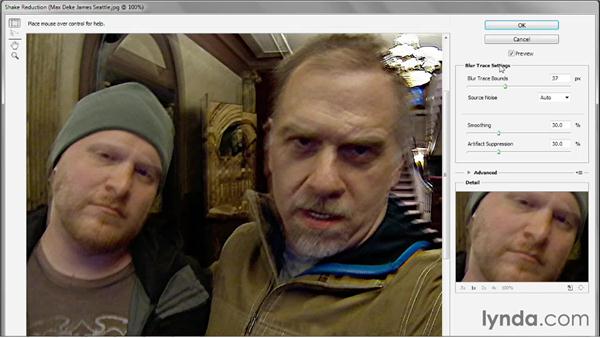 In this movie I'm going to introduce you to the camera shake filter. And we're going to be working with this image here which is a handheld GoPro shot under low light. That's me in the center of course, and then this is Max Pixley Smith my producer here in Boulder. And this guy over here on the right is fellow lynda.com author James Williamson. And we're in a hotel in Seattle, as if you care Now, you may look at this image and mistake it for the before version, the thing that we're going to correct. The truth of the matter is this is the after image. This is the corrected image, believe it or not.

And it's pretty rough, of course. But bear in mind that we're starting from this. And so, we're starting with an image that is very much of a mess in the first place. And this is the kind of stuff that shake reduction excels at. Is basically reconstructing an image that has all sorts of blur. So you can see that basically we've got a kind of radial blur going on that's affecting Max more than it is me or James. And what shake reduction's been able to do is focus on Max there for a second.

Just check out how much the filter's really reconstructing his face. Now his shirt is still very blurry but who cares, right? What we want is a nicely focused face detail. So I'll go ahead and switch back to our original image here. And because you can apply shake reduction as a smart filter. I'll go ahead and double click on the background here and I'll just go ahead and call this layer Max, Deke, James, because those are the people, and click OK. And then I'll right click inside the image window with my rectangular marquee tool and choose Convert to Smart Object.

Now, if you're working along with me. Go up to the Filter menu, and choose Sharpen, and then choose Shake Reduction. So, shake reduction's the very first sharpen filter. Now, I get the reasoning behind Adobe putting it here. But I do think it's wrong to think of shake reduction as being a sharpen filter. Because, strictly speaking, it does not sharpen details, it reconstructs them. So it's all about trying to take the scene and reinvent it. Which makes it about the most intelligent feature inside of Photoshop frankly. Alright, so I'll go ahead and choose the command and you can see that it already did an evaluation.

You might of seen a progress bar in the lower right corner of the dialog box, and that tells you that the filter is trying to evaluate the image automatically from the get go. Now, to better see what that that looks like, you can zoom in using the standard keyboard shortcuts. For example, I'll press Ctrl+1, or Cmd+1 on a Mac to zoom in to 100%, and notice we've got this preview check box, if you turn it off, you'll see the original version of the image, which looks barely any different at all. And then, if you turn on preview, you'll see the after version. So what this is telling us, of course, is that, so far, shake reduction is not doing a terribly vigorous job where this image is concerned.

And so we need to help it out. Now, you may be seeing a pin with a rectangular marquee around it. That's a function of having advanced twirl to open, like so. And now you can see this pin. And I can drag it to a different location, as well. However, in this movie, I'm going to keep it closed, because I want to focus on the loop down here, and notice as soon as I twirl advance close, that marquee disappears. Now, what the loop does, is it allows you to hone in on a specific detail inside the image, and you can do that by dragging around, or you can just click on some portion of the image.

So by virtue of the fact I clicked on Max's nose, he shows up in the lower right corner of the screen here inside that loop. And then if you want to enhance that specific detail, you go ahead and click this icon right there Enhance at Loop Location. And that will reevaluate the image based on that specific location. And now you can see that we've done a bigger job anyway of fixing the image. If you turn off the preview check box, that's the before version and if you turn it back on, that's the after version. Another way to work with the loop is to un-dock it, so that it becomes a floating item here inside the preview.

And you can do that by clicking on this little icon right there. Or more easily you can just double click inside the preview and that will undock the loop as you see here. And notice because I'm zoomed in at a 100%, I'm also seeing the loop at a 100%. So in other words they match right now. And as I drag the loop around we're seeing the before version. As soon as I release we're seeing the after version. You can, of course, zoom in on that loop if you like by clicking on these little icons, or you can zoom out.

This item right there is telling you how far you're zoomed into the image in general. So right now, it says 100%. If I press Ctrl +minus or Cmd + minus on the Mac, it's going to tell me 66.7%. So now I could click on 66.7 in order to match the image in the background if I so desire. But more likely than not, you're going to want to be looking at the image, at least inside the loop, at 100%. And then, I could drag this around to a different location, such as my eyes. And then click on the enhance button in order to enhance the image according to this data.

And that would be a horrible, tragic mistake of course because I make the image look like this, which is considerably more damage than it started. Anyway, so let's move back over to Max here and I'll enhance based on his face Now, I want you to see a couple of other things. I'm going to go ahead and put this loop away. That is to say, dock it back here in the lower right corner. By clicking in the little closed box. Or you can just press the q key to quit the loop, like so. Turns out the q key is a toggle. So if you press it again, the loop will come back into the preview.

Anyway, I'm going to press q in order to make it go away. We'll come back to this option right here in a later movie, but I do want you to understand how smooth an artifact suppression works in the mean time. So I'll go ahead and zoom in on the image once again. Now what smoothing is doing is reducing noise inside the image. So if you reduce the smoothing value, you're going to get more noise and potentially more detail as well. In fact, I actually like this effect better than what we were seeing by default. Or you can crank it way up in order to smooth the heck out of the image like so.

Which in this case is not going to work out too well for us. I'm going to set the smoothing value to 10% for now, and then we have Artifact Suppression. So the idea is that in the process of reconstructing the image, the Shake Reduction Filter introduces its own kinds of artifacts. If you want to suppress those artifacts as much as humanly possible, then you crank that value up to 100%. But that also means that you're going to correct the image to a very small degree. Notice if I turn the preview checkbox off, and then turn it back on, the two are almost identical.

And that's what's going to happen if you crank this value up to its maximum. If you want the shake reduction filter to go absolutely crazy on the image, do its thing unfettered, then you go ahead and take the artifact suppression value down to 0% and this would be the maximum amount of shake reduction that you could possibly apply. By default this value is set to 30% which works pretty well in the case of this particular image. So I'll leave it set there for now. And then I'll go ahead and click OK in order to apply the filter.