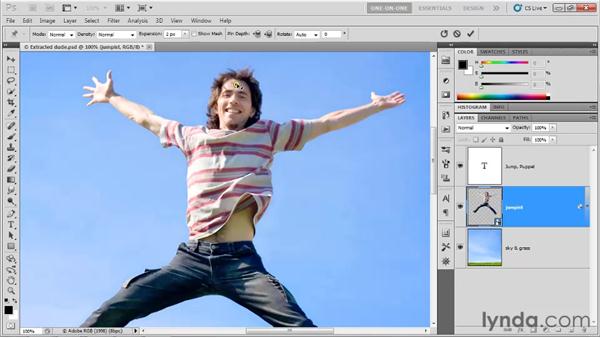 I have saved my progress as Extracted dude.psd found inside the 23_distort folder, so called because the jumpist layer has been extracted from the sky & grass background. Now let's go ahead and click on jumpiest. And getting to Puppet Warp is as simple as going up to the Edit menu and choosing the Puppet Warp command. But before you do that pause for a moment, because when you choose Puppet Warp the idea is you are going to lay down a bunch of pins and drag them to different locations, and then you are going to invoke the feature, and it's an independent transformation mode, much like Free Transform by the way.

So when you apply it you are actually rewriting pixels inside the image. Now with Free Transform that tends to work okay, because you usually get it right while you are in the Free Transform mode. You usually get it pretty well figured out, but with Puppet Warp you might sort of zoom in later and figure out that you've got problems, and you may want to make modifications. So it's very possible you're going to want to keep this feature live, and if you do, so that you can come back to and make modifications well into the future, then you want to go ahead and wrap your layer before you apply the Puppet Warp command inside of a Smart Object, and I am going to show you how to do that.

It works with free transform as well, Smart Objects do, and that way you can modify your layers well into the future if you like, which tends to be quite useful. However, I would categorize it as essential where Puppet Warp is concerned. So let me show you how you do that, and just pardon me for getting ahead of things, because we are not going to cover Smart Objects until we get to the Mastery portion of the series, but this step that I am about to show you is very easy to pull off. You just go to the Layers panel flyout menu right there with the layer that you are going to modify selected, and then you choose this command right there, Convert to Smart Object.

Now you have a Smart Object. It has this little Page icon down in the bottom right corner which indicates that you've taken the image and embedded it inside of itself, and we'll come back to that when we discuss Smart Objects in an independent chapter in the future. But what you need to know now is a Smart Object is neither smart, there is no smartness to it, and it's not really an object. I don't know what objectifies it anymore than any other layer. It is a protective container. So you're basically sliding the image into this glassine envelope that's going to keep it safe from harm, and now you can do things to it and those things that you do will remain live.

One of the things that you can do is you can go to the Edit menu, and you can choose the Puppet Warp command in order to enter the Puppet Warp mode here inside Photoshop CS5, and you may be confronted by this strange spider's web of a mesh right here which I don't find to be particularly helpful. It's sort of interesting, and I guess it indicates the wacky things that are going on in the background as you modify the image, but more than anything it just really gets in the way of your ability to see what's going on. So you can turn the mesh off up here in the options bar by turning off Show Mesh.

It's still there doing its thing, but now you don't have to look at it. All right, so right off the bat, you don't have anything to work with. You have to lay down some pins and in order to get anywhere you need to lay down multiple pins. Because if I just click one pin, let's say I decided to set a pin right in the guy's forehead three. Notice this cursor right here, looks like a little tack, so you are basically tacking areas down, and now with this one pin, if you decide to drag it around which is what you do with the pins, you drag them to move them. But if you drag this pin, you are just going to move the guy to a different location.

Oh look, part of his scalp was left behind. I will have to go and take care of that problem in a moment. But in the meantime notice that I am just moving the guy around, and I don't want to do that. So I will press Ctrl+Z or Cmd+Z on the Mac to put him back where he was. Oh that hair was added by Content-Aware Fill. Thereby demonstrating not magical that feature is, it does make weird mistakes like that. It went ahead and took his hair and threw it outside into the larger world of the image. Anyway, now I am going to go ahead and lay down a couple of other pins like so, put one pin here on the right shoulder, his left, and another pin down on the other shoulder, and now if I drag let's say this top pin, the one that I laid down at first, I can cover up that bit of scalp up in the background.

Notice that I am stretching his head as I do so, or I could scrunch his head if I prefer it like that. Now all these modifications are dynamic at this point, so you can feel free to make a fair mess of the image, knowing that even if you do something completely ridiculous like that, later you can come back and put that where it was, because, and this is the advantage of that mesh. The whole time what you are really doing is editing this kind of parametric mesh in the background and so if you end up dragging it out to wherever you decide to and then later putting it back, you are actually undoing that previous modification.

And by virtue of the fact that you are working on a Smart Object you can come back and revisit your work later. All right, I am going to turn off the mesh for a moment, and then I am just going to go ahead and press the Enter key or the Return key on the Mac in order to apply Puppet Warp for the time being and notice instead of it being a destructive modification as it would have been if I had applied the function directly to the image, it becomes this modifiable item here inside the Layers panel which is a function of working with the Smart Object. Now you are going to see that this is a Smart Filter curiously enough, and we will visit smart filters in detail as well in the mastery portion of the series.

But we also have this Filter Mask, and that's useful if you want to mask away part of your effect, but of course bear in mind that if you do that, you are going to reveal an undistorted area and the distorted portion of the image and the undistorted portion might not line up correctly. So under most conditions you are not going to use this filter mask, and if you are not going to use it, it just clutters up the panel. So I am going to right-click inside of that white thumbnail, and I am going to choose Delete Filter Mask. Now you can always add it back later, if you decide you need one, just by right-clicking once again on Smart Filters and choosing Add Filter Mask, so no harm done there.

Anyway I am going to Escape out. That is our first look at Puppet Warp. Very briefly before I go on here. I am going to turn the jumpist layer off for a moment, because I am just not thrilled with this little bit of hair that's showing up at the top of the image. So I am going to go ahead and select that hair using the Lasso tool of all tools. I will just drag around it, and switch to that sky & grass layer, and let's make Content-Aware Fill reconsider this portion of the image by pressing Shift+Backspace or Shift+Delete, and our settings are fine, because these are the last settings we used.

So Use is set to Content- Aware, click OK and bang. That offending detail goes away. Gosh, that's nice! All right, anyway I am going to turn the jumpist layer back on, click on him and in the next exercise we will revisit this Puppet Warp item right there, and we will make some additional and perhaps more pleasing modifications.