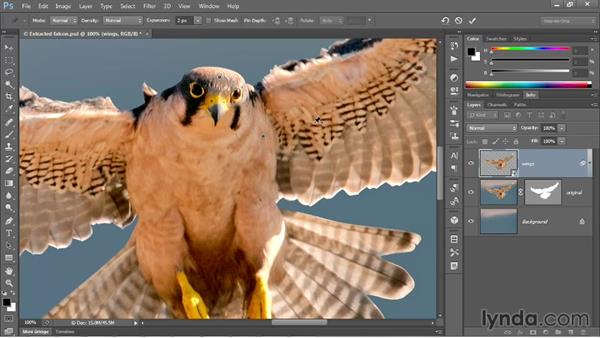 In this movie I'll introduce you to the puppet warp command. If you're working along with me go ahead and click on that original layer there, that represents the extracted falcon. And let's create a copy of it by pressing Ctrl+Alt+J or Cmd+Option+J on the Mac. And I'll call this new layer wings and Click OK. The next thing you want to do before you launch into Puppet Warp is convert the layer to a smart object because that's going to give you way more flexibility and you'll be able to come back and revise your settings later. And, of course, to do that you Right-click inside the image window with the rectangular marquee and choose Convert to Smart Object.

That goes ahead and places both the image itself and its vector mask into that smart object, by the way. And that also permits you to edit both the image and its mask. In sync with each other. Now go up to the Edit menu and choose Pop-It Warp. And you'll initially be confronted by this mesh, which represents a kind of distortion matrix. I don't find it to be all that helpful and I think it gets in the way when you're editing. And if you agree, then you can turn off the Show Mesh check box up here in the Options Bar. Now notice how things work.

When you're working inside the Puppet Work mode, you're setting pins. So the cursor appears as a tack, and you click in order to add a pin to the image. If you have just one pin and you move it around, then you're going to move the entire layer. So I'll go ahead and press Control-Z, or Command-Z on the Mac, to undo that change. You have exactly one level of Undo while you're working inside the Puppet Work mode, by the way. If you were to set another point, like this, and then you started dragging it around, the deselected point is going to be locked down, and then you'll rotate the image around that point.

I'll go ahead and press Control Z, or Command Z on a Mac, to undo that change, as well. Then if you have three pins and you drag one of them around. Notice that you're stretching the image with respect to these two points that are locked down. And everything that's not locked down over here on the left side of the bird moves as well. Alright I'm not looking to do any of this. I just want to show you how things work. So the idea is. If you don't want something to move you need to lock it down. So both this stuff that you want to change and the stuff that you want to leave alone need to have pins in it.

I am going to get rid of the pins I've created so far. And you can do that in one or two ways. You could press the Alt key or the Option key on the Mac in which case when you hoover over a pin your cursor changes to a little pair of scissors. And then you click in order to delete the pin Or you can right click in the Puppet Warp mode and choose Remove All Pins to get rid of everything you've done so far. All right, I want to make sure that the falcon's eyes remain nice and sharp, even after I get done making some edits. So I'm going to click inside of each eye to lock it down.

And also click on the beak to set a point there. And if you end up getting this warning that tells you you're trying to set one pin too closely to another, for now just click OK. I'll explain more about what that means in a future movie. But just click OK and click to set a point further down the beak, like so. Alright now zoom out a little bit and I am now going to set points at the base of the wings like so both at the top and the bottom of each wing. And then I am going to set a couple of points in his knees here in order to lock them down.

And then finally I will zoom out a little bit and set a point right about there inside of the wing And set another point closer to the tip. And then I'll set a point here, and another one closer to the tip of the left-hand wing. All right, now zoom out a little more so I can take in more of my image at a time. And I'll grab this guy right there and I'll drag him down like so. And notice that everything that's deselected is not moving. So I'm only moving this one portion of the image.

So I have a unique degree of control over how I'm distorting this layer. Alright now go ahead and drag this guy down to about here as well. And I might take things down a little farther here. On both sides of the bird like so. And if you like, you can also adjust these middle points in the wings, in order to give them a little more bend. Then when you're done, go ahead and press the Enter key, or the Return key on the Mac, in order to escape the puppet warp mode. And apply puppet warp as the smart filter here inside the layers panel.

Now, you do have the option of adding a filter mask, which you might think would be very handy. For painting away the stuff that you don't want to see move. For example, in the bird's head, but you're better off locking that stuff down because, if you paint it away, you're going to have weird, either harsh or soft gradual transitions, neither of which make any sense. So, if you don't need a filter mask, it's always good idea just to right-click on it and choose Delete Filter Mask to reduce clutter inside the Layers panel. And then finally my rectangular marquee tool is selected so press the 7 key in order to reduce the opacity of this layer to 70% and that folks is how you take advantage of the puppet work mode here inside Photoshop.