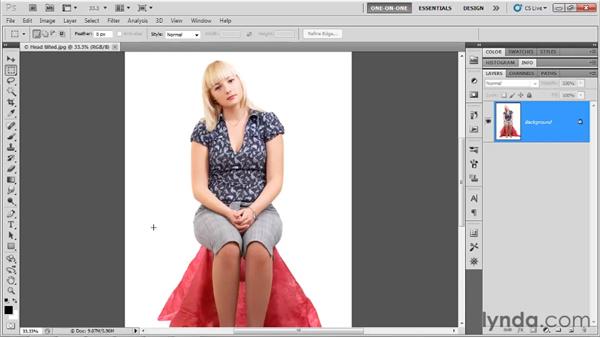 Now there is a few limitations associated with Liquify. You can't apply it nondestructively. It is a destructive filter through and through, meaning that it makes permanent modifications to the pixels inside of your image. You can't apply it to a Smart Object. You can't apply it as an adjustment layer. None of that stuff applies. You just have to go ahead and apply it to either flat image or an independent layer, what have you. The good news is that it is a lot of fun to use. So it is one of the funnest features inside of a Photoshop frankly, because you can wreak all sorts of havoc on an image.

And it's the only feature that allows you to paint in distortions inside the program. So it's quite powerful, as you are about to see. In fact, what we are going to do is we are going to take this image. It's called Head tilted.jpg, and it comes to us from photographer Pristyazhnyuk Sergey Anatolievich of the Fotolia image library. About which you learn more at fotolia.com/deke. We are going to take her in all of her splendor. Now bear in mind this is a woman who is pretty darn good looking. However, her pose cannot be frumpier.

She has got one shoulder sort of lowered here. This other shoulder is raised up. Her head is tilted in just an absolutely un-delightful manner. She is sort of slumping. She is turning a little gooey sort of in the midsection, her arms look just unbelievably long and one elbow is lower than the other is. She is sitting on a very narrow stool. So for her bottom is sort for sagging on both sides. Those of you who are photographers, and they're taking portrait shots, please don't put your people on narrow stool so that their bottom sag.

That would happen to all of us. It's just not a good look. Then finally I'd like to go in there and tone up those legs a little bit. So, the idea behind Liquify is that on a practical level it allows you to apply digital nips and tucks, and you can slim people down in certain regions, tone them up in other regions, make people look their absolute best. What we are going to do is we are going to take this woman here and we are going to make her look like that. Notice that nice trim bottom. Her arms are lifted up, everything is a little more symmetrical so that she has got both shoulders raised, her head is tilted up right, much better posture, her legs are toned, and so on and so on.

We are going to do that using the Liquify filter. So I am going to restore the original version of the image. By the way, I am just done doing back and forth by pressing Control+Z, Command+Z on the Mac. You are not going to be able to do that, because you haven't performed these steps yet. Anyway, here is what we are going to do. Now you could take this image. It's currently a flat image. You could take it and you could jump it to a new layer, if you wanted to. That would protect the original layer in case you wanted to come back to it. But that's not really the way you work with Liquify. Typically, you are not going to be basically layer masking the results of the Liquify filter in order to expose some of the underlying original or merging the two using Opacity or anything like that.

Rather you are going to apply the command to an independent layer, if you are working inside of a layered composition. But if you are working inside of a flat photograph like this one, then I advise you after you get done applying the Liquify filter, you go up to the File menu, and you choose the Save As command, so that you don't overwrite original image. Anyway, we will come back to that. But for now we are just going to work on this flat image by going up to the Filter menu and choosing the Liquify command. Notice you have got a keyboard shortcut. This is an oldie but a goodie. It's assigned by Adobe, not me.

It's Ctrl+Shift+X or Command+Shift+X on a Mac. That brings up the Liquify dialog box. If you want to think of it that way right here it's actually, as I say, an independent utility that operates inside of its own window. You've got the tools over here in the left-hand side. You've got the options over here in the right-hand side. If you want to make sure you're getting the exact same results as I am getting, so that you are starting with the default settings, then press and hold the Alt key or the Option key on the Mac, and now will change that Cancel button in the upper right-hand corner from Cancel to Reset.

So you'd Alt+Click on that button or Option+Click on a Mac in order to reset everything inside the dialog box. So that not only resets the image, if you have made any changes, but resets all of your numerical settings. That resets the behaviors of the various tools, and so on. Now we have set in painting in our distortions just by dragging here inside of this image window. This is an accurate preview by the way of what the image will look like. I'll show you how we paint inside the Liquify window and how to use the various tools in the next exercise.