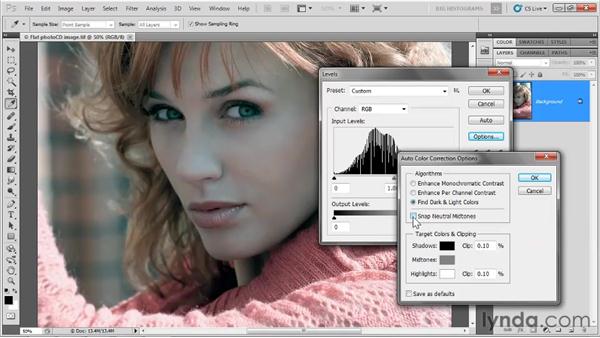 In this exercise, I am going to introduce you to the Levels command, and I'll also show you how to apply all of the Auto functions that we've seen so far: Auto Tone, Auto Contrast, and Auto Color. You can vary their behavior in a way that effectively allows you to double the number of automatic options available to you, so instead of three, you'll now have six. I'm working inside of a file called Flat photoCD image.tif, that's found inside the 14_levels_curves folder. You can see that, yes, indeed, here inside the Layers panel, I've gone ahead and jettisoned the extra layers and we are left with a base photograph.

I'll now go up to the Image menu, and let's say we want to apply, for starters here, a static application of the Levels command. I'll choose Adjustments, and then I'll choose Levels, or I could press Ctrl+L, Command+L on the Mac, brings up a dialog box complete with a 256 pixel wide Histogram. Now, I'll demonstrate how the options around the Histogram work shortly, but first, there is your Auto button. If you click on the Auto button, either inside of Levels or inside of Curves, by default you'll apply Auto Tone, as you can see out here in the Image window.

Now, you might wonder, why in the world would you do that? Why would you go to the trouble of bringing up Levels or Curves and then click on Auto when you could just use the Auto Tone command? Well, this way the automatic adjustments serve as a jumping off point for your own custom adjustment, and I'll show you how to do exactly that in a future exercise. But let's say instead, right now what we want to do is we want to switch to one of the other Auto functions, then you would click on the Options button. Notice that you're presented with three Algorithms options, all of which have fairly long names associated with them, but actually they're just fancy names for the commands that we've seen so far.

That's because the Auto Color command is a combination of this radio button and this check box right there, Snap Neutral Midtones. Notice if I hover over it, it tells me how that option works and then at the end, in parenthesis, (Auto Color). So the idea is this, if you just select the radio button, then you're essentially neutralizing the Shadow and Highlight detail inside the image. If you want to also neutralize the Midtones, then you have to add the check box. Notice if I turn on the check box now, we get a slightly different effect, it's a little bit bluer this time around.

So already we've seen how you have an Auto Color function with and without Neutral Midtones. So in other words, we have two different variations on Auto Color, but by virtue of the check box, you now have two variations on all of the functions. So I can combine Snap Neutral Midtones, for example, I'll go ahead and turn it off for a moment, but I could go ahead and select Enhance Monochromatic Contrast in order to apply the Auto Contrast function, and then I could turn on Snap Neutral Midtones to add a little bit of Auto Color flavor to it. Right now, we are seeing an automatic function, that is otherwise unavailable to us in the Image menu.

Now let's dropdown to the next group of options. Not quite so useful, but you may find yourself taking advantage of them every once in a while. You can specify the color of Shadows and Highlights, which are currently black and white. So in other words, let's say you don't want the darkest color inside of your image to be black, because maybe your commercial printer has told you that you should lighten it up just a little bit in order to preserve the Shadow detail inside of your image. Then you would go ahead and click on the swatch and enter some slightly lighter values, like I could enter 2 for R and then 2 for G and then 3 for B, if I wanted it to be something other than exactly neutral, if I wanted to have some additional blue inside of those shadows.

And then I would click OK in order to accept that modification. Now, in my case actually, given the way that things are running, I'd probably want to go ahead and raise the red value a little bit and take the blue value down in order to make the Shadows a little ruddier, and then I would click OK. You could do something similar with this Highlights option. You could make the brightest color something a little darker than white, if you wanted to make sure to preserve those Highlights when you print the image. Again, this would be a decision you make after consulting with your commercial printer. Also notice, we have these Clip options.

I don't recommend you do that, but you can experiment with it if you like. What I am going to do in the case of this image is, I think I'm going to set the Midtones to something other than neutral gray. So I'll click on that gray swatch to bring up the Color Picker once again. I'm going to change the Hue value, I think, to something like 35 degrees, so that we have something of an orange flavor here. Then I'll tab to the Saturation value and I'll use my Up Arrow key in order to raise that value incrementally, and ultimately, I am going to take it up to 5%.

So that just slightly warms up those Midtones a little bit. And then I'll go ahead and click OK. Now, the final option allows you to save your defaults. So in other words, if you save these settings, these become the default settings for the Auto button. And in the future, clicking Auto will go ahead and apply Auto Contrast, along with Snapping the Neutral Midtones, and you are going to have slightly lighter Shadows and your Midtones are going to be a little bit orange. Now, that's not something that I want to do on a regular basis.

In fact, I am just going to go ahead and Cancel out of here, because the better way to apply the Levels command is as an Adjustment layer. I want you to see what the differences are there in the very next exercise.