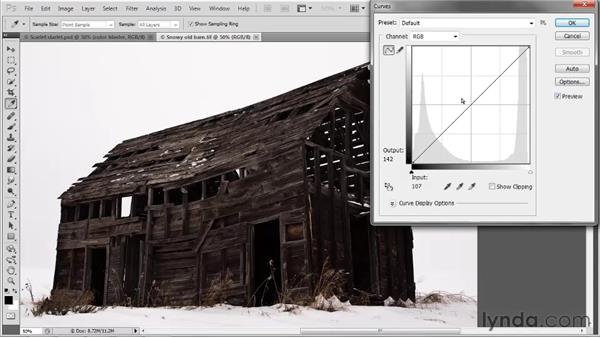 All right, we're through with us Fotolia portrait. I've gone ahead and saved out the final corrections as Scarlet starlet.psd. We're now going to move on to an image that you cannot successfully accommodate using the Levels command. That's this one right here, it's called Snowy old barn.tif. This is an image that I captured either in northern Wyoming or southern Montana, we were somewhere right around the border. I'm going to go ahead and press Shift+Tab to hide the right side panels, and then scoot this guy over to the left a little bit, so that we have some room to work on the right. While I really like the detail inside of this image, it's really sharp and tactile.

However, we've got some major contrast problems. The barn is so dark, it looks like it was set on fire. Then the background is so bright, we barely have any detail whatsoever. So, what we need to do is reduce the contrast of this image. That's not something that the Levels command excels at. If you go up to the Image menu and choose Adjustments, and then choose the Levels command, and right now we're working with static adjustments, so that we can keep a careful eye on the image, which is awfully wide as you can see. Or you can press Ctrl+L, of course, Command+L on the Mac to bring up this dialog box.

Notice that we have this big, mountainous group of shadows, and then we have this huge plateau of highlights. But what are we going to do about that? We could use the White Point slider here to make the highlights that much brighter, and we could use the Black Point in order to make the shadows that much darker. But that's not going to do us any good whatsoever. Now, we could turn around and decrease the contrast by raising the Black Output Level and then lowering the White Output Level. But as we've seen before, and we can clearly see now, these options don't do you any good, where correcting continues photographs are concerned.

So, what I'd like to do is completely reset the options in the dialog box, and you can do that by Option+Clicking the Cancel button. So, notice when you press and hold the Alt key on the PC or the Option key on the Mac, the button changes to Reset. Click on it, and you're back to no modifications whatsoever. Now, the one positive change we could make to this image is to increase the Gamma value like so, and that will brighten up the wood on the outside of the barn terrifically. However, the problem is, while we're left with some nice, dark shadows inside the barn, we've pretty much ruined what positive contrast we had here in the slats of wood, and we haven't done anything positive for this snowy background.

If anything, it's actually brighter than it was before. So, go ahead and click the Cancel button; that command is not going to work for us. If you're in a hurry, or you want a simple solution, why then you could go up to the Image menu, choose Adjustments once again, and this time try out Brightness/Contrast. For contrast reductions, it's actually a more successful command than Levels is. Make sure Use Legacy is turned off. Then reduce the Contrast value to its minimum, in the case of this image. I might go ahead and bump the Brightness value up to 30, let's say.

We get this effect here, and it's much better than what we achieved just a moment ago with Levels. We have some decent detail left inside of that wood. We still have some nice rich shadows inside the barn and so on. However, again, we haven't managed to make a positive contribution to the snowy background. So, we still have this definition-less world in which the barn exists, which I'm not comfortable with. I want to bring out detail throughout this image. The only way I'm going to pull that off, I'll Cancel out here, is to apply the Curves command.

So, I'll go up to the Image menu, choose Adjustments, and notice Curves that appears right under Levels, also, by the way, its keyboard shortcut is sequential. So, what you're seeing here is if Ctrl+L or Command+L doesn't work for you, then step it up and press Ctrl+M or Command+M in order to bring up the Curves dialog box. In the graph, just like the graph inside the Levels dialog box, features a histogram. Now you might look at this histogram and say, well, it's quite different Deke, it's all squished. Well, really, it's stretched.

It's the same width as the histogram that we saw on the Levels dialog box, 256 pixels. But it's been stretched to fit inside of a square. That actually doesn't matter. The reason is that these individual bars in the bar graph, they don't represent absolute numbers. In other words, we're not seeing a pile of all the pixels that have a luminance level of say 28, rather we're seeing the relative population of those luminance level 28 pixels with respect to the other pixels inside the image. So, you can make the histogram taller or shorter without changing its meaning.

Also, notice here that we see black on the left, and white on the right. Now, that's what you should see as well, and that's in keeping with both Levels and the Histogram panel. Now, if you're not seeing that, for some reason, you see white over on the left-hand side, and black over on the right-hand side, which is the default setting, by the way, when working inside of a CMYK image. Then you can switch it by clicking on this double down-pointing arrowhead right there. It reveals a handful of other options. Make sure all the check boxes are turned on, by the way, and then you would switch from Pigment, that would be your problem, as you're looking at the Pigment version of the graph, switch it back to Light.

Now, I should say, Light is the default behavior for RGB images, and we want to keep it that way. All right, go ahead and hide these options, so that we can see more of the image in the background. Now, in order to use the Curves dialog box, you change the curvature of this line through the center of the graph, and that line actually is the curve for which Curves is named. Now, you might look at that and say, well, that's not a curve Deke, that's a straight line, and that's true. But it will be a curve, as soon as you clicked to set a point, and right now I want you, if you're working along with me, to set a point right in the middle of the graph, like so.

That's going to be the same as the Gamma value inside the Levels dialog box. But Curves doesn't talk to us in terms of gamma, it addresses us in terms of Input and Output levels, and 128 is right there in the center. So, we've got zero for Black, 255 for white, 128 is neutral gray, and right now, I'm mapping what's currently 128 inside the image to 128. So, in other words, I'm not making any changes so far. However, if I were to drag this point upward like so, I'd be mapping an Input level of 128 to an Output level of 153.

That has exactly the same effect as raising the Gamma value. As a result, I increase the brightness of the barn. So, before, when we were inside the Levels dialog box, we took it quite high, actually a little higher than this, I think. We've got an effect that looks something like this. It's hard to say exactly what that was, because there is no way to map a gamma value to this Input-Output relationship here. But in our case, we are increasing the Gamma like crazy. Now, if you wanted to decrease the Gamma you would just grab that middle point, keep it in the middle of the graph, because you can't move it back and forth like that.

Keep it in the middle of the graph and just drag it down. All right, so where Curves really shows off its power is when we add additional points to the graph. I could grab this point that we've created so far and I can move it into the Shadow region, and also lift it up, so that we're brightening the shadows inside the image. Then I could set another point in the Highlight region like so, and I could drag that one down in order to darken the highlights. I get this effect right here where the snow is now darker, and thus delivering more detail.

The barn is now brighter, it's delivering more detail as well. Now, I'm not saying that this specific adjustment is what we're looking for. In fact, I don't think it is. I think we need to work a little harder at it. But this does give you a sense of what you can do inside the Curves dialog box, and you can alternately add and adjust as many points as you like.