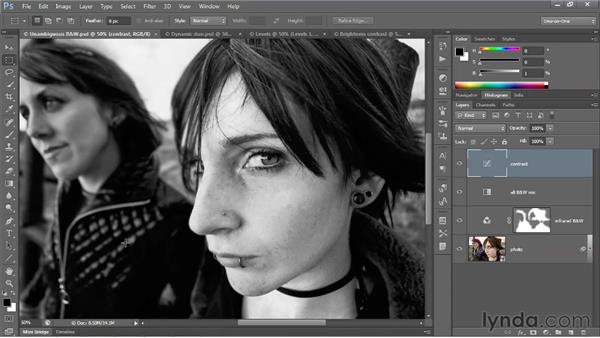 In this movie I will introduce you to the Curves adjustment, because when you first encounter it, it's a little bit of a head scratcher. And by way of example I have opened one of those black and white variations that we created back in Chapter 20 of the Intermediate Course and while I think the world of the black and white adjustment here, if I have one complaint it's that it tends to deliver images that lack heft. That is to say the shadows and even the midtones in the case of this image just aren't dark enough. What I want is an effect more like this one here.

The difference between this dramatic unambiguous black and white image and the one we saw a moment ago is that the one we are looking at now includes a Curves adjustment and the one we created in Chapter 20 does not. So let's start things off by getting a sense of when you want to use Curves. It's basically that luminance adjustment command that you go to when Brightness/Contrast and Levels just don't do the trick. So I will start by showing you what we can do with Levels and Brightness/Contrast where this image is concerned. I will go up to the Image menu and choose a Duplicate command and then I will go ahead and call this new version of the image Levels and zoom in on it.

Then I will drop down to the black/white icon at the bottom of the Layers panel and choose Levels command. I am going to go and expand the Properties panel as well so that I can see the full width of the histogram like so. Presumably, what I do is I would, for example Alt+Drag or Opt+Drag this black slider triangle in order to preview the clip pixels on screen and notice that they're appearing in black and white as opposed to the various colors. That's because all of the colors in this particular image have been converted to shades of gray.

So at a black point of about 10 we are seeing probably about as much clipping as we want. So we will go ahead and release. Now I could do the same with the white triangle here; I could Alt+Drag or Opt+Drag it over to say 240. But if I do that I'm going to blow some highlights and I am going to overly brighten this image. I'm not interested in adding more brightness to it. So I will just go ahead and restore that value to 255. That leaves me with just one more point of control and that's the Gamma value. So I will go ahead and click in it and press Shift+Down Arrow three times in a row to reduce that value to 0.7.

That's about as much work as I can get done with Levels. So let's go ahead and close the Properties panels so we can see what we have got. Things are in pretty good shape. We have some very dark shadows; that's good. The midtones are looking okay. But if you compare that to what I was able to achieve with curves which is this image here you can see that we have got a lot more detail going on inside the hair. We've got much better shading and detail inside the flesh and we've got all kinds of great shadow detail as well. So while Levels is pretty good, it's not nearly as great as what I am hoping for.

So now let's see what we can achieve using Brightness/Contrast. I will go ahead and switchback to my starter image. Go up to the Image menu, choose the Duplicate command, and call this one Brightness contrast, of course. Then click OK in order to create the new version of the image, zoom on in as well, drop down to the black white icon at the bottom of Layers panel and choose Brightness/Contrast. Then I will go ahead and crank that Contrast value up to its absolute maximum of 100, which does a great job of making the shadows very dark, the highlights get overly light in my opinion, however nothing ends up clipping inside the image. So that's good.

Then I'll take that Brightness value down to let's say -40 in order to tame some of those highlights and bring the midtones down as well. Again, things look pretty good and you might argue compared with Levels that Brightness/Contrast ends up performing little better, but I am not so sure actually. But again we are losing detail inside of the hair and inside of the shadows particularly when compared to that final version that we are going to achieve using the Curves adjustment. So let's see what Curves looks like.

I'm going to switchover to that starter once again and I am going to drop down to the black/white icon at the bottom of the panel and you can see that the Curves command immediately follows Levels and Brightness/Contrast. It really does go like this. Try Brightness/Contrast first, if that does the trick, great. Try Levels second, if that does the trick, great. And if neither of them work, then move on to Curves. Exposure is never useful in my opinion. I am going to go ahead and choose the Curves command. Notice that you end up seeing this big square graph. Well, even though it's pretty darn unfamiliar, a lot of the stuff we are seeing is very similar to what's going on with Levels.

For example, the centerpiece of this graph is a histogram and even though it looks like a squished histogram at first, it's actually exactly the same width as the histogram that appears along with levels adjustment. The difference is that the Curves histogram is stretched vertically in order to fit inside of square, which is perfectly fine, by the way, because after all these vertical lines inside of the graph, they don't represent absolute numbers. In other words, this one right here isn't a heap of all of the pixels that are that dark shade of gray.

Rather, those are the number of dark gray pixels when compared with these very light gray pixels represented by this tall line on right-hand side. We've also got a black triangle and a white triangle. They let you modify the black point and white point inside the image. Then we have this diagonal line which is the curve itself which may seem odd, because after all it starts off as a straight line. You make this line curve by clicking somewhere in the graph in order to set a point. So in my case I've clicked right there at the center.

So what I'm seeing here is that I've set a point and 128 which is medium gray. So you may recall 0 is black, 255 is white. So right there in the center is 128. I am mapping shades of gray that were formerly 128 to an output level of 128 once again. So I am not changing them at this point until I drag that point to another location. So let's say I drag the point directly up. Now I am mapping an input of 128 to an output of 171. So all the shades of gray that were formerly 128 are now being mapped to 171, which of course is lighter gray.

The other shades of gray move along with, because after all the line is gradually tapering as you can see here. You can also drag this point down if you like in order to darken the shades of gray. For example, if I take this value down to let's say 86, I am mapping what were formerly medium grays to dark grays. If you just drag a point up and down like, this is very much like modifying the Gamma value when working with Levels. If I want to achieve an effect that's very much like what we saw with Levels just a moment ago, then I would also press the Alt key or the Option key on the Mac and drag this Black slider triangle, so you can preview your clipping inside curve just as you can when working with Levels.

I can see that some of those shadows are clipping over on the left-hand side of the image. So I'll go and release. So at this point I am saying anything that has a luminous level of 10 or darker is going to map to an output of 0, which is black. Let's go ahead and hide the Properties panel for a moment so we can compare the effects. This is what we're able to achieve with curves so far bear in mind and this is what we achieved with levels. If anything the Curves adjustment is already better even though it's remarkably similar, the Curves adjustment has slightly better detail going on inside the shadows and a bit more detail inside of the highlights as well.

So there's your introduction. But here's the thing. If we were able to achieve an effect just as good as anything we might achieve with Levels that easily with Curves, just imagine how much better we can do in the next movie.