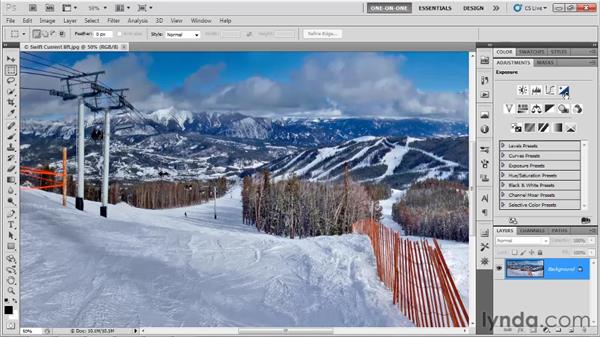 All right, I've switched photographs. This one is called Swift Current lift.jpg and this is an image that I captured in Big Sky, Montana, which is this ginormous ski resort, and what we're looking at right here is indeed the Swift Current lift that goes down to the bottom. I captured this image, actually it's a series of photographs that I merge together into a big panorama using Photoshop's Photo merge function and we'll see that in the mastery portion of this series, but I was able to capture the various bits and pieces of this panorama using a little point-and-shoot camera called the Olympic Stylus Tough.

It's a great camera to have in your pocket when you're skiing because it's waterproof and it's temperature-resistant and it's shock resistant, the whole number. So you can imagine I had it with me in my pocket the entire time, I fell on it a few times. It took a booting and it kept on shooting and it basically goes back to that thing where the best camera is the one that you have on you and I wasn't going to take an SLR with me skiing all day long because I would have bashed it to heck, I had quite the fall during this little adventure, and also it probably would've frozen up, who knows what would happen to it, but this little camera worked wonders and I was still able to capture a very big image here as you can see, so this wide panorama shot again that I stitched together using the Photo merge function and it used to be much bigger than this.

I've actually down sampled it for purposes of this exercise. And we're going to convert this image to black-and-white to a quite impressive black-and-white shot actually using the final Black & White function of Photoshop which goes by the name Black & White, and just as with Channel Mixer you can either apply it as a static adjustment. So you can go up to the Image menu, choose the Adjustments command and then choose Black & White. If you loaded dekeKeys, I've given you a keyboard shortcut of Ctrl+B or Command+B on the Mac, which by default is associated with the Color Balance command.

However, I find Black & White to be much more useful, in fact it really is one of the preeminent color adjustment functions inside Photoshop. However, we're going to apply Black & White as an adjustment layer. So, I'm going to go ahead and Shift+Tab back my right side panels, and notice the I've moved things around just a little bit, I've moved the Adjustments panel back into the stack here and I moved the Histogram panel over here into the Icon column, and that's just going to free us up a little because we have this big wide shot here to contend with. Now, in order to create a Black & White Adjustment layer, I'll go ahead and expand the Adjustments panel here and I could click on this fourth icon in the second row right there, the pair of black and white triangles.

Not to be confused with this guy which has a white triangle on top and a black triangle on bottom, plus and minus symbols that's the Exposure function, I never use Exposure. I find it very difficult to control; it's very difficult to get decent results out of it. It was really originally designed for 32-bit per channel images and that's the way it speaks to you as well and it's about as useful as the old Black & White command. Anyway, not to be confused, use this guy right here, the one without the plus and minus, and you click on it and then you get this big list of options and notice here that you have independent control over those 60 degree color increments that we first explored in the fundamentals portion of this series.

So in other words, we've got our reds, yellows, greens, cyans, blues, and magentas, equal color increments, every one of them is equally spaced on the big Color Wheel, and you have independent control over each one of these guys. So you're not really mixing channels, the way you are with the Channel Mixer. Instead, you're identifying ranges of colors much like the Hue/Saturation command. You're identifying ranges of colors and then you're modifying those color ranges independently of each other. All right, I'll say one more thing about this.

I'm going to go ahead and press Ctrl+Z, Command+Z on the Mac to undo the creation of that adjustment layer and I'll go ahead and collapse the Adjustments panel for a moment. Again, if you loaded dekeKeys, I've given you a keyboard shortcut, and I robbed it, I can't remember from which of these two commands one of the Auto commands, either Auto Contrast or Auto Color, but again, much more usefully applied for this purpose. So, if you loaded dekeKeys, you press Ctrl+Shift+B or Command+Shift+B on the Mac to go ahead and not only expand the Adjustments panel, but basically Alt+Click on that Black & White function, Option+Click on the Mac and bring up the New layer dialog box, so you can do all of this stuff in one operation and then go ahead and name your new layer, I'll just call it B&W so I have a shorter name, and I'll click OK and I'm ready to go, and I've got independent control over each one of these color values.

Now, notice our default settings here, 40, 60, 40, 60, 20, 80, they add up to 300. So, don't get it in your head that these values unlike the Channel Mixer values these guys don't have to add up to anything, it doesn't matter what they add up to at all. And these just happen to be the default settings that come up every time. You can also by the way click on Auto if you want to and if you click on the Auto button, then Photoshop will make its best guess for this specific image. Now I've never found it to be terribly successful, but it is there, it's available to you.

You also have some presets that you can choose from, so you could choose something like Blue Filter which would simulate the effect of having a blue filter on your camera lens, which gives us a very bright sky or if we wanted to darken that sky, we could probably apply a Red Filter here and we'll get a much darker effect, and actually that's much closer to what I'm looking for. It's a very dramatic effect as you could see. But what I'm going to suggest we do, for the sake of learning what's going on here is go ahead and switch back to Default and then we'll manually adjust these numeric settings starting in the next exercise.