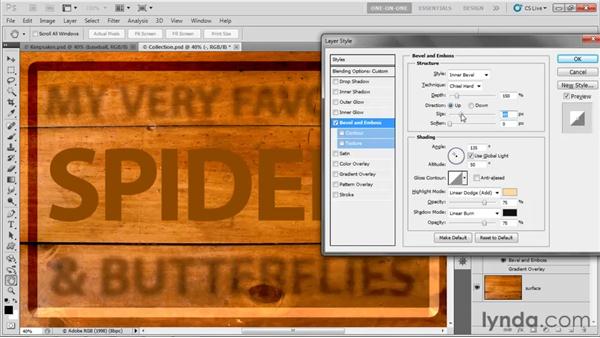 I've saved the results from the previous exercise as Keepsakes.psd found inside the 21_layer_FX folder. In this exercise, I'm going to introduce you to the Bevel and Emboss effect, which has by far the most bells and whistles associated with it. Along the way, I'm going to show you how I crafted this lid layer right here, which is the vector based rectangle. The name of which is just called dash for the sake of expediency, so that I'm not wasting any horizontal space here inside the Layers panel. Notice that, I guess, it's a kind of lid in which the seams exactly match.

I put that down to the fact that whoever was the carpenter of this thing, was an absolute perfectionist. He or she worked like crazy, just to make sure those seams lined up exactly, like the pattern on a shirt when you button it up, and the pattern goes right over and It looks awesome; same thing here. Anyway, it started off though, as a kind of frame effect. You may recall that the name of my original file was Word processor, because I was crafting a primitive a word processing environment. So I'm going to switch over here to Collection.psd, also found inside the 21_layer_FX folder.

I'll show you how I put together the original frame effect. I'm going to go ahead and click on this layer once again, called Dash. It's still a vector based rectangle. The difference is that the rectangle defines the shape of the hole, and everything outside the rectangle is colored. So in order to see how that's arranged, I'm going to go ahead and grab my Black Arrow tool. Then I'll click on the outline for the rectangle, like so. If you go up here to the options bar, you'll see that this second icon is selected, the one that says Subtract from shape area.

So normally, when you draw a shape, it's Add to shape area that's active, so that you're filling in the shape, and the area outside the shape is transparent. But if you switch to the Subtract from shape area, then the shape itself becomes a hole, and the area outside the shape is filled. So as a result, I get this frame effect. Well, of course, it's an extremely ugly frame, because I'm using an even duller beige than I've been using for the central word. So in order to create a little bit of dynamic interaction, I switch my Blend mode from Normal to Overlay. You can see how just a little bit of color saturation really goes a long way when combined with that Overlay mode.

Then I'll press the Escape key, so the mode is no longer active here on a PC. I'll press Shift+5, in order to reduce the Fill value to 50%. All right, now I'm going to click on this vector mask thumbnail, so that we're not seeing the rectangular outline anymore. You can just barely see the framing effect now. To help offset it, I went ahead and added a Bevel and Emboss effect. This is where I started, actually. was with Bevel and Emboss. You can see that there are a couple of other layer effects. I'll show you how those work in just a moment. But I'm going to start things off by double-clicking on Bevel and Emboss, so that you can see how I put together this very simple effect, by the way, with a dark edge up left, and a bright edge down right.

So the bright edge is catching the light. The dark edge is obviously slightly in shadow. I'll go ahead and double-click on Bevel and Emboss to bring up the layer Style dialog box with the most options you'll see in any one panel. So let's go ahead and run through the list here. I might very well make a mess of things, as I work inside of this dialog box. No problem. If I do, I can always restore the last settings I applied to the specific layer, by pressing and holding the Alt key or the Option key on the Mac.

Notice the Cancel button switches to Reset. So if you Alt+Click or Option+Click on that button, then you will restore my original settings. Anyway, let's go ahead and reduce the Soften value for now. Increase the Size value quite a bit, so we have a big thick edge although not that big. Let's try about 40, for example,. Then I want you to see how these options work. By default, Technique is going to be set to Smooth, so that you're going to get a blurry effect. So typically, you'll get a little bit of a blurry shadow like we're seeing here and a blurry highlight as well.

Although, because of my Altitude value, which I'll come to in moment, I'm catching the edge a little bit, so that I have a little bit of darkness before the highlight appears, right there on that bottom right edge. Anyway, as I say, I'll come back to that soon. You also have a couple of other techniques that are much sharper. There is Chisel Hard. That gives you that hard edge like we're seeing here. You can see right there at the corner, the chiseling that's going on. Then we also have a Chisel Soft effect. I doubt you're going to see any difference here; no, not much.

The reason being that these two differ from each other, Chisel Hard and Chisel Soft, when you have smooth contours like letterforms, for example, then you're going to see something of a difference. Typically, I have to admit, I don't take much advantage of Chisel Soft. I'll either go with Smooth or Chisel Hard, one way or the other. All right, so I'll reset this guy to Chisel Hard, which is the way it was. Notice we also have a handful of Style options. Inner Bevel is going to keep the highlight and shadow edges inside of the shape.

By inside the shape, I mean Outside in this case, because remember that the rectangle is serving as a hole, and it's the area outside the rectangle that's being filled. So it's really a frame layer. And Inner Bevel is keeping the shadow and highlight edges inside of that frame. If I want to wander out of the frame, I would choose Outer Bevel to get this kind of effect, which could prove very useful for a framing effect as we're seeing right there. That's actually a heck of a good frame, although I will say Inner Bevel is the default setting, and very likely to be the one that you'll use most often.

Emboss is going to go ahead and stride the edge. So it's going to center the effect on the edge of the rectangle, like so. Then Pillow Emboss is going to create a double-edged effect. So in this case, we're going to get a shadow in the upper-left corner. Then immediately after that, we're going to catch a highlight, as if there is a groove along the edge, along that rectangular outline. Then we have the opposite effect down right. Then finally, we have Stroke Emboss. If I choose it right now, we won't see anything. The reason is that you have to go ahead and apply a Stroke, which is a heavy outline.

Then the beveling effect will appear inside of that Stroke. Anyway, I'm going to switch this guy back to Inner Bevel for our demonstration here. Soften is most useful when combined with the Technique of Chisel Hard or Chisel Soft. This allows you to take that sharp edge, and blur it to taste. So you can Soften it up a little bit, which I did to create my effect by the way. Now I'm going to drop down here to the Highlight and Shadow modes, and I want you to see that by default, these guys are set to Screen for the Highlight just as with your glows, the default setting for the glows that is.

That's exactly what I did in this case. Now finally, we've got these guys right here. Gloss Contour, which is different than the Contour options that we've seen so far. We'll come to it shortly. Then we've got Angle and Altitude, which define the location of the light source. I'll explain how those work in the next exercise.