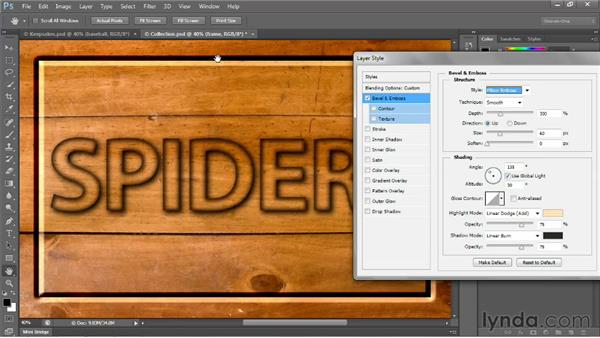 In this movie I'll introduce you to what is by far the most elaborate and complicated of the layer effects inside Photoshop, and that's Bevel & Emboss. And I use the Bevel & Emboss effect to create this kind of lid that's resting behind the letters, but I think it's best understood in the context of creating a frame. So I am going to switch to this image, and I am going to click on this frame layer to select it, and then I'll press the A key to get my Black Arrow tool, and I'll click on the rectangle. In my case I have to click on it a couple of times in order to select it.

Now I want to turn the rectangle into a hole, so we're filling the area outside the rectangle which will serve as the frame that we're lighting. And so I'll go up to the Path Operations icon, click on it, and then choose Subtract Front Shape, and that will turn that shape into a hole. I could've also just tapped the Minus key, by the way. All right, now I'll click at the filled area to deselect the rectangle, and I'll press Ctrl+H, or Command+H on the Mac, to hide the outline, and now I'll go to the Blend mode popup menu in the upper left corner of the layers panel and change it from normal to the first of the contrast modes, which is Overlay, and that'll give us a little bit of heat inside of that frame.

And next I'll press the Escape key so the Blend mode option is no longer active here on the PC--that's not necessary on the Mac--and I'll press Shift+5 in order to reduce the Fill Opacity value to 50%. Now that makes the layer nearly invisible. However, it's going to serve as a perfect jumping off point for Bevel & Emboss. So drop down to the fx icon and choose the Bevel & Emboss command which is at the top of the stack. And just so we can see what we are doing here, I am going to move this dialog box quite a bit over, and I'm going to increase the Size value to 60 pixels, let's say, and I'm going to reduce the Altitude value--we'll come back to what this means in a moment--to 30 degrees, and I'm going to increase the Depth value to let's say 300%.

And Depth, by the way, controls the steepness of the edges. So at this point we've got an Angle value of 135 degrees. That means the light source is up and to the left, and as a result is casting shadows in the upper left corner, because after all this edge is sloping downward, and then this edge is sloping downward as well. The entire interior of the frame is, and as a result the lower right corner is catching the light. Now I am going to adjust my Highlights and Shadows, which affect, of course, the shadows and highlights that we are seeing inside the image.

I'm going to start with the Shadow mode. I want to give it just a little bit of color, so I'm going to click on that black swatch. I am going to change the Hue value to the usual 35 degrees, and I'll set both Saturation and Brightness to 15%, so this time I'm going with a very low saturation dark color, and I am going to leave the Opacity set to 75%, but I do want to amp up the effect, so I am going to switch the Blend mode from Multiply to the most radical of the darkening modes, which is Linear Burn. Then I'm going to do something similar with the Highlight.

I'll click on the white Color Swatch here, I'll change the Hue value to 35 degrees, I'll change the Saturation at 35%, and I'll leave the Brightness set to 100%, then I'll click OK. Then I am going to change the Blend mode from Screen to the most radical of the brightening modes, which is Linear Dodge, and we end up with this hot effect down here. Now let's take a look at Style, and I know I am kind of jumping around here, but I want to work in an order that makes some sense. By default, the shadows and highlights are set on the inside of the frame.

However, if you wanted to move them outside the frame, to the interior of that unfilled rectangle, then you would choose Outer Bevel. And notice now we're casting the highlights and shadows into the background image. If you want to kind of split the difference, you can choose Emboss, and that's going to go ahead and center the shadows and highlights on that frame boundary. If you want to create a kind of carved effect where the frame goes in and then the interior comes back out, then you go with Pillow Emboss, and you can see now we've got a shadow immediately followed by a highlight and another shadow followed by a highlight downright, and as a result it appears as if the rectangle is kind of carved into the background.

This final option, Stroke Emboss, requires a stroke, so I'd have to turn on the Stroke, make it pretty thick, and then I could set the Emboss effect inside of it. However, for this effect what we want is Inner Bevel. So I'll go ahead and switch it back. By default, this Technique option is set to Smooth, meaning that we have soft highlights and shadows. If you want something a little more emphatic, then you can switch to one of the Chisel options here. We are not going to see a difference between them, because in order to see a difference between Chisel Hard and Chisel Soft, you need a curving edge, and in our case we've got straight sides.

But my recommendation is either go with Smooth or go all the way and select Chisel Hard. And notice that does give us some very abrupt transitions, as well as these kind of triangle patterns here on the corners. If you want to soften things up you've got this Soften option right there. So go ahead and click inside that value. Notice I'll press the up arrow key a few times, and as I do you can see these triangles blur away. And I've finally-- for what it's worth--arrived at a Soften value of 10 pixels.

Now let's check out Altitude. You know how angle works, that's the direction of the light source. Altitude is the height of let's imagine the sun in the sky. You can change it by dragging this guy inward in order to raise the sun or outward in order to send it down to the horizon, and you can also drag this guy around in order to change the Angle as well. I'm going to go ahead and reset that Angle value to 135 degrees, and now I've got a very low sun, as you can see here at 5 degrees in the sky, and that means that we have a very dark shadow indeed, because it isn't catching much light, and we have a pretty bright highlight down right because it's really catching the light.

Now if I were to click in this value and press Shift+up arrow in order to raise the sun, let's say as high as 45 degrees here, at this point it's about something like 10:30 a.m., and the sun is starting to rise pretty high in the sky, and as a result we're starting to lose some of the light on the bright edge, and we'll start filling in the dark edge shortly. So I'm going to take this value to 50 degrees, which is the default setting, and you can see we are starting to lose that bright edge, and now I'll press the up arrow key, because it's between 50 and 60 degrees that you really see things changing.

And notice we're losing the light like crazy on the down-right edge, and we're breathing some light into the upper left edge as well. And a lot of the reason that we're losing so much light down right is because we have such a high Depth setting. If I were to take that setting down--so I'm pressing Shift+down arrow to reduce this value to about 150% works well for this effect-- then you can see that that less steep edge is catching more light. Anyway, you can take the Altitude value all the way up to 90 degrees at which point it's high noon, light is coming straight down, it's going to brighten the heck out of the surface of this layer if we could see it, and we have nothing but shadows left, because there is nothing really except for the surface catching the light.

Anyway, I went ahead and stuck with the default Altitude of 50 degrees. And one more item that I haven't mentioned is Direction. Notice that right now the surface is up and the edges are going down. If you want it to be the other way around, you want the surface of the frame to be treated as if it's down, and then the edges are going up, then you switch to the Down option. I of course want Up to remain selected. And then finally, I took the Size value down. I just wanted it this high for demonstrational purposes. I ended up taking the Size value down to 10 pixels to create this slightly sloping frame effect that you see here. And now I'll move the dialog box over and click the OK button in order to accept that effect. And that, folks, is how you create a raised framing effect using Bevel & Emboss here inside Photoshop.