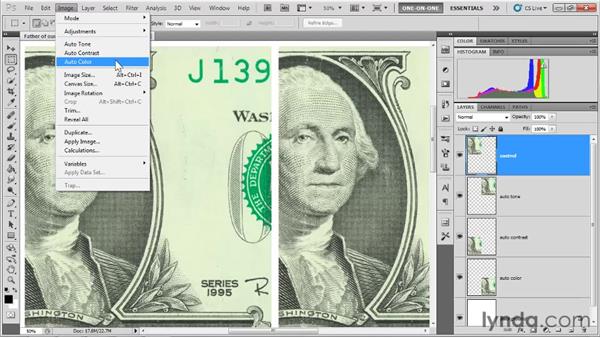 We're going to spend most of our time in this chapter on just two functions. Located under the Image menu, you go to Adjustments and they're located right there, Levels and Curves. And they're both available as Adjustment layers as well by the way, and we'll see all that of course. Now, these rank among Photoshop's most essential capabilities, they are the two most powerful color correction features inside the software. In many ways they duplicate each other, they work differently, but their goals are the same. And what they do is this, they allow you to correct the luminance of an image on a channel by channel bases.

And the practical upshot of that is, you can correct the brightness of an image, you can correct its contrast, and you can also compensate for color cast, all from one dialog box, or panel, or what have you. Now, as I say, they're both working toward the same goal, so there's no reason to use both of them on the same image. You want to make a clear call, you're either going to use Levels, because that's all you need, it's the simpler of the two commands, or you need more control and you're going to switch up to Curves, that's the way it works. But they both include a handful of duplicate options.

So I'll go ahead and choose the Levels command to bring up the Levels dialog box. And you can see right there that there is an Auto button and an Options button, both of these buttons appear inside the Curves dialog box as well. And if you click on Auto, and I'm going to go ahead and do that, I'll click on Auto here in order to apply one of three flavors of automatic correction to this selected layer. And I'm currently working on the control layer incidentally, inside this image called Father of our money.psd. You control which flavor of Auto you apply, because notice, Auto just does its thing.

You change the flavor of Auto by clicking on the Options button. I'm going to Cancel out. The reason I mention this is that, those three Auto functions are also available under the Image menu as independent commands. We have Auto Tone right there as well as Auto Contrast and Auto Color. And you can think of them as being the children of some kind of crazy marriage between Levels and Curves, because they are taking all the power of Levels and Curves and applying them automatically and without any further conversation. Notice there is no ellipses, no ... after any one of these commands.

So you just choose a command and it does its thing, like so. And incidentally, Auto Tone produces the exact same effect as just clicking on the Auto button, without changing the options inside either Levels or Curves. Anyway, again, I'm going to undo that modification. I want you to understand where these names are coming from, because Auto Tone, Auto Contrast, Auto Color, fairly cryptic and a little bit misleading as well. The word Tone is synonymous inside of Photoshop for luminance or brightness, what have you.

And in fact, you only use the command when the image does not have a color cast, when you're happy with the colors. And otherwise, it goes ahead and changes the brightness, possibly enhances the contrast as well. And then this Auto Color command, strictly speaking, has nothing to do with color, what it does is that it examines the channel by channel Histograms, just as Auto Tone does. So it examines the image on a channel by channel basis, goes ahead and corrects the brightness and contrast, and then it seeks to neutralize the Highlight, Shadows, and Midtones in an image, with the goal of getting rid of any color cast, and sometimes it's successful, other times it's not.

Now, in order to really understand how these commands work, so that you have some way of predicting the outcome, I don't want you to just sit there and choose the commands willy-nilly and hope for the best, we need to be able to keep tabs on the Histogram for the image that we're working on. And to do that, I'm going to bring up the Histogram panel. And you get to the Histogram panel by going to the Window menu and choosing the Histogram command, or if you loaded dekeKeys, my custom keyboard shortcuts, then you can press Alt+F8 or Option+F8 on the Mac. Now, a couple of other changes I want to make to this panel.

I want to be able to see a larger version of the Histogram, because right now we can't see all 256 different luminance levels. So in order to see the full 256 pixel wide Histogram, you go to the panels flyout menu and you choose Expanded View. And that gives you a bigger Histogram. You also see some technical statistics down here at the bottom of the panel. I want you to be able to see the Channels and Colors, so make sure that this Channel option is set to Colors , like so. And that way you'll see each of the independent Histograms; one for the Red Channel, one for the Green Channel, and one for the Blue Channel, all at the same time overlapping each other.

So we can see in this case, for example, that the Blue Channel is darker than the Red Channel, which is a little bit darker than the Green Channel. So the Green Channel has the most highlights, and the Blue Channel has the fewest highlights. I also want to be able to keep track of those Histograms independently. So I'll go to the flyout menu again and I'll choose the All Channels View. As soon as I choose this command though, I'm going to run into problems. I'm going to get this error message, that's essentially telling me it is now impossible to view the Histogram panel, because it's too darn big.

And so I'm presented with one of three different solutions; I can close the other panels in the dock first. Well, they're already smooshed closed, so that's not going to do any good. The third suggestion is to increase my monitor resolution, which is a great idea, except I can't for the sake of this video. And then the final option is to move this panel out of the dock. That's the one I'm going to do. You could say, Don't show again to this message, but then if you ever run into it again, you're going to have no idea what the problem is, you just won't be able to see that panel. So I would suggest you don't turn that check box on, just go ahead and click on the OK button.

I'm going to drag the right side of this title bar over and drop the panel so it becomes a floating panel, like so, then I'll double-click in this region in order to expand the panel. I'll double-click over here to expand the Layers panel once again, because it got smooshed close. And then finally, I'm going to go ahead and switch my view of each one of the independent Histograms. Because of the way the labels read, notice Red, which is pretty high up, goes with this Histogram right there, even though it looks like Green is its label.

So because of the way the labels are placed, I think they're misleading. Let's remove the ambiguity by going to the flyout menu and choosing Show Channels in Color. And then I know, there is the Histogram for the Red Channel, there is the one for the Green Channel, and there is the one for the Blue Channel. All right! So now we have this whoppingly huge Histogram panel. It will allow us to examine each one of these images in all sorts of detail, as we apply the various Auto commands. Just one last problem, and that's this little warning that keeps appearing. Notice it's telling me that I need to Click the Histogram for the uncached data, which is to say, if you really want an accurate Histogram, you need to click on this warning in order to update the Histogram, but notice that it happens every single time I switch to a different layer.

So again, I have an inaccurate Histogram, again I have to update it. This is going to get really old, really fast as we work through this demonstration. So I'm going to make a change, and along the way I'm going to explain how cache levels work inside of Photoshop, in the next exercise.