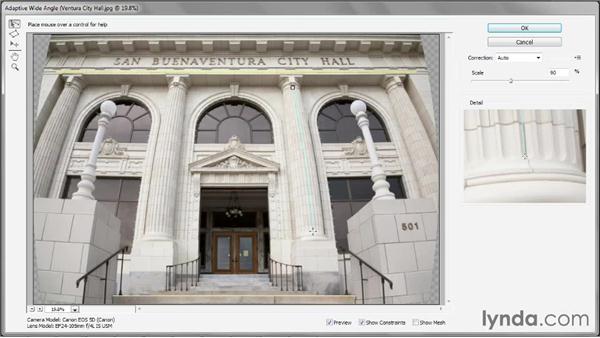 In this movie, I'll show you how to use the adaptive wide angle filter to remove the distortion from a scene. In our case, for example, we have a little bit of barrel distortion. And it's most evident up here in this cornice, that is, up at the top of the building. But you can see the stairs bow outward down here near the bottom of the photograph as well. Now, adaptive wide angle is available as a smart filter, so the first thing we want to do is convert the image in to a smart object by double clicking on it to bring up the New Layer dialog box. I'll call the layer City Hall, and then, using my rectangular Marquee, tool I'll right click inside the image window and choose Convert to Smart Object.

Next, you want to go up to the Filter menu and choose Adaptive Wide Angle. And with any luck, correction we will be set to auto, where this image is concerned, and that's because Photoshop recognizes this combination of camera and lens. However, that may not always be the case. Now just because it's applying an automatic correction, doesn't mean that it's necessarily good one. In our case, for example, it's made the problem worse. And when that happens, you want to take advantage of these tools in the upper left corner. Starting with the Constraint tool, which is selected by default.

To use this tool, you go ahead and drag along what should be a straight detail inside of the image. So I'm dragging here along the bottom of this freeze, and that goes ahead and straightens things up quite nicely. Now I'm going to scale out just a little bit so I can take in the stairs down here at the bottom of the image. Let's say that you want a line to be not just straight, but you want it to be absolutely horizontal or vertical. Then you press the shift key as you drag the line, and the filter will go ahead and constrain this detail to whatever is closest that is, horizontal or vertical.

In my case it's going to be horizontal, which is why I'm seeing a yellow line. Whereas an unconstrained line appears blue. If you want to constrain a line you've already drawn, then just go ahead and right click on it, and then choose, in this case, horizontal, and we'll end up with a yellow line once again. Alright, now I'm going to work on these columns. Now, you might figure the safest thing to do is to just drag along the column, because that's where you can actually see the lines. However, if you do that, notice what happens. It straightens out the column, but then we have a little bit of an elbow right here, because the base for the column is not included in the constraint.

So I'll go ahead and drag this guy all the way to the base, so that we get a nice straight column, and I'll go ahead and drag it up to the top as well. Now notice these guys right here. If you hover over these round handles, you'll get a little rotate cursor and then you can drag in order to rotate, in my case, the columns just a little bit. I don't want them to be entirely vertical because that one look right, and introduce all kinds of weird distortion into the scene. But I do want them to be a little more upright than they were. And now the line turns green as you can see there, indicating that I've applied an arbitrary constraint.

Alright, now I'm going to go ahead and drag down this column like so. And I'll do the same thing, I'll just drag this guy counter clockwise, this time around, in order to apply another arbitrary constraint. I definitely need to straighten out this column as well, because it's really bowing outward. Now notice that time, it didn't take, and that's because I dragged outside of the image there. But, you can just click at the first point, and click again, at the second point, if you like as well. And you may find that when you're dragging, a line turns red on you.

I don't see in the beginning that effect right now, but if you do which just means that the filter is unhappy with the line that you've drawn, and you just have to move one point or the other to a new location. Right, I'm going to go ahead and drag down this light, and this light needs to be straightened out as well. And then finally, I'm going to Shift drag along the top here in order to flatten that out and make it entirely horizontal, like so. All right, now I'll restore the scale value to 100% because if you don't do that, you will scale the image using the filter.

And now I'll click OK to accept that effect. And then Photoshop will apply adaptive wide angle, as an editable smart filter, here inside the layers panel. So that's one way to use adaptive wide angle. In particular, I showed you how to work with the straight line constraint tool. In the next movie, I'll show you how to straighten things further using the polygon constraint tool.