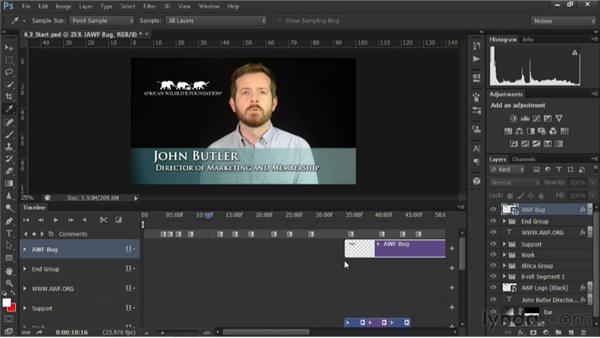 Oftentimes you want to brand a video. Sometimes it will be a logo bug that stays up all the way through like a watermark, or maybe it just appears for a short while. I want to show you the easiest way to pull that off. I have gone ahead and positioned where the logo is called for in the script. It's supposed to appear next to our subject here. Let's just add a new layer, and I'll choose File > Place. This allows me to navigate and choose a graphic file, such as in Adobe Illustrator Graphic. Clicking Place will add it as a Smart Object to the scene, there we go, I'll click OK, it adds it in. Let's position it where we want and holding down the Shift key I could scale that.

Now this a very wide logo, so I need to be careful that it doesn't cover up our subject and it doesn't get too close to the edge, so it's hard to read. I'll press Return to apply and you see it appears. Of course, it's dark gray on black so that's not going to work very well, but that's an easy fix. Let's throw away the extra layer I don't need and drag this back, so it lines up with the other clips. And using Layer Styles, I can go ahead and put a Color Overlay on top, allowing me to change it to match any color I want. That works nicely, and I am going to position that in that place there, and that works well for the first appearance.

What I now want to do is apply this to other segments. So I'm going to go ahead and duplicate that layer, and call it Bug, and we're going to put that up top. Now this is floating above all other layers and I'm just going to drag it out to the end of my timeline. In this particular case, we don't want it part of the end logo, but we do want it up for much of the middle of the video. I can adjust the handles to tell it when to appear. And I'm going to set it to coincide with this other B-roll that appears later in the program.

Let's go ahead with Command+T or Ctrl+T to Free Transform, drag that down to the corner and make it a tad larger. Here we go, press Return and it redraws as a clean vector. I'm also going to apply a slight Bevel, put that as an Outer Bevel and adjust the original opacity of the Fill. This will leave the Bevel behind, but make the Bug partially see through.

I'll need to do the same real quick here to the Color Overlay, there we go, and now we have our Transparent Bug logo that looks pretty good. Now I am just going to adjust the timeline here, so I could see where it falls, and I'm going to suspect that this going to get in the way of the URL that pops up. So let's simply lose it. We'll go ahead and split the clip and this allows us to adjust, and I'll bring it up for a part of the video and then reposition it towards the end here.

Let's go a head and duplicate this layer here as well, and we'll set a second instance to appear over the web pages to cue them the URL twice. It's more than fine to brand multiple times. So now we have a bug, a URL that comes up over the web pages, a URL that repeats and a logo bug that comes back. Let's put a quick fade on those logo bugs. With it selected, I'll just grab my transitions and place a fade at the beginning and end for both times. There we go, we've established branding and a call to action.

5/21/2012
With the release of Photoshop CS6, Adobe introduced the ability to edit video footage. Author Rich Harrington guides you through this brand-new workflow, from building a sequence to working with audio and exporting your video in a variety of high-quality formats. The course also covers how Photoshop's strongest feature, its image enhancement toolset, translates to video, from fixing under- or overexposed footage, performing color balancing, and adding vibrance and contrast to special effects, such as converting to black and white and using Smart Filters to soften skin.
Topics include: