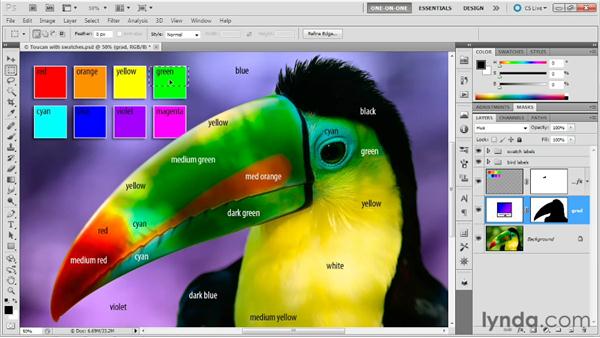 In this exercise, we're going to take a look at how channels work. I still have open Toucan with swatches.psd; I also have the Channels panel open as you can see. Now I happen to be working in the RGB color mode. RGB stands for red green, blue, by the way, and as a result, the top item in the Channels list reads RGB. I stress that this top item is not in and of itself a channel; it's actually a composite view of three channels working together. And those three channels are red, green and blue, which are the component color bearing channels.

You also have access to these keyboard shortcuts Ctrl+3, Ctrl+4 and Ctrl+5, that's Command+3, Command+ 4 and Command+5 on the Mac for the independent channels. And if you want to switch back to the full color composite, you can press Ctrl+2 on the PC or Command+2 on the Mac. Now the reason that I'm showing you these channels is because they are key to getting masking done inside of Photoshop. If it weren't for each one of these independent color channels, I never would have been able to generate this mask around the bird, and therefore I would not have been able to color its background.

Because I can access these channels, I was able to mask the bird in color of the background with impunity. Now you may have seen when we're working in the independent channels, we are seeing grayscale versions of the image. So it's a little difficult to gauge where the colors went, and what kind of contribution each one of these channels is making. So if you're working along with me, go and switch back to the full color composite, switch to the Layers panel and notice we have a couple of groups that work here. If I turn on the bird labels, I'll see a series of color labels throughout the photograph, and those will help me keep track of where I am color wise inside of the independent channels.

Notice that some of the labels list the colors brightness, for example, we have medium green, we have dark green as well, and some of them don't. If you don't see a brightness that means we're seeing the color pretty much as bright as it gets. I also have these color swatches up here in the upper left corner. I have some labels for them as well that you can get to by turning on that top group. And I want you to note here that each one of these colors is cranked up to its absolute full brightness value and its full intensity.

And as a result they're highly saturated, very bright colors. In case you're unfamiliar cyan is a 50- 50 mix of green and blue and magenta is a 50-50 mix of red and blue. Yellow, by the way, is a 50 -50 mix of red and green. Now that may seem a little weird, but bear in mind when you're working inside of an RGB image you're working with the primary colors of light. Light that's been captured by a digital camera and light that's being projected by your monitor.

And as a result, adding primary colors, such as red and green goes ahead and creates a brighter color, in this case, yellow. All right, let's take a look at these channels independently. I am going to switch back to the Channels panel, and I'm going to click on red. Anywhere where we're seeing darkness or shadows, results in little participation of the red channel. So we are not getting much light out of the red channel in the black regions of the bird and we won't get any participation from the other channels either, that's why that region looks black.

We are going to get absolute participation in the white area and we are going to see brightness and the other channels there as well. We're also going to see a lot of red in yellow areas, whether it's a bright yellow or a medium yellow, like the one down here at the bottom of the screen. And we'll see bright pixels inside the orange areas and the tip of the bill which is red as well. We're not going to see too much going on inside the green regions, we are seeing quite a bit of red in the background, especially down here in the violet region. Now notice the color swatches.

Red is very instrumental in communicating, red, orange, yellow and magenta and it engages to a certain extent inside the violet swatch. There is no red inside that green swatch or the cyan and blue swatches. All right, now let's take a look at the green channel. Now notice the amazing thing about the green channel is it comes closest to being a straightforward grayscale representation of the image. So we have a nice distribution of shadows and highlights throughout this channel. Again, the black area is black, the white area is white.

I was telling you that yellow is a combination of red and green light, so the yellow areas are very bright. We also have some brighter pixels going on for the greens; however, we're really dropping out in the reds. The background is about as bright as it was when we were looking at the red channel, and then check out the swatches here. We've got big participation inside the yellow and green swatches, as well as the cyan swatch in the second row. We have a little bit going on where orange is concerned, nothing for red and nothing for blue, violet or magenta either.

All right, next comes the blue channel. The blue channel is always going to be the one that looks the worst inside of a digital photograph, and as a result it can sometimes give you some very interesting results where masking is concerned. Because, after all it is that very, very different view of the image, than you're used to. Notice that most of the bird is going very, very dark, because there's not much blue action inside any of these colors, with the exception of that shoulder which is brighter here in the blue channel, than it is in the other two.

Also notice this cyan area around the eye is fairly bright in the blue channel; in the red channel it's extremely dark. And then we have a little bit of brightness going on here inside the white region, which implies that that area isn't actually truly white, it's probably more of a pale yellow. Notice that the background has brightened up considerably, both at the top and the bottom of the image, and the entire bottom row of swatches are lit up, the entire top row of swatches that is red, orange, yellow and green have gone totally dark.

All right, so hopefully that gives you an introductory sense anyway of how color bearing channels contribute to the overall color of an image. However, at this point, my biggest question if I were watching this, would be how in the world do a bunch of grayscale images end up mixing together and creating a full-color view, and I'll explain exactly how that works in the next exercise.