How the Auto commands work 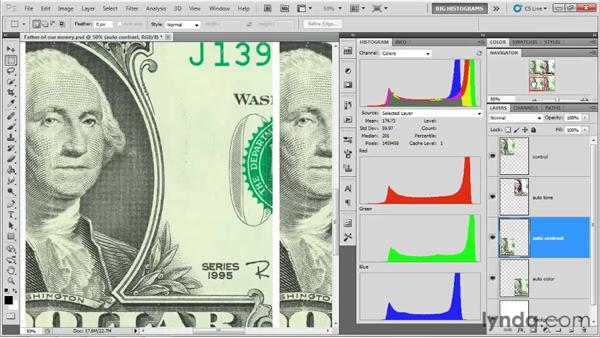 In this exercise, we are going to see and compare the effects of each of the three Auto commands. Notice that I have opened Father of our money.psd. I also have opened the Histogram panel and I have Source set to Selected layer, so that we are seeing the histograms for a single layer at a time. Now, we are going to start with the Auto Tone, so I have selected the auto tone layer here inside the Layers panel, that's the top-right fragment of money inside of the composition. What the Auto Tone command does incidentally, is it goes and reads the histogram for each channel and modifies it independently.

It goes and stretches the histogram, across the entire width of the graph here, which enhances the contrast and absolutely annihilates the Color Caste as we are about to see. Now, the caste that's associated with this money happens to be indigenous, in other words, it wasn't added by the scanner. However, Photoshop doesn't know that and it goes ahead and gets rid of any color caste it finds. So go up to the Image menu and notice if you loaded dekeKeys, you don't have keyboard shortcuts for any of these commands. I have actually stolen them and assigned them to different features inside the software, in part because those shortcuts weren't all that memorable for these commands in the first place, and also because even though the Auto commands are very useful learning tools, my guess is that, you won't be using them often enough to warrant shortcuts.

Anyway, I will go ahead and choose Auto Tone, I want you to watch the image and the histograms and I will go ahead and zoom in on the top-right money there, and notice I have the Navigator panel open, I will go ahead and scoop my display over, so that the money is more or less centered. So this is the Before view, greenish highlights and greenish shadow detail as well, and this is the After view, neutral highlights that is colorless, and then the shadows if anything are a little bit reddish. So what's going on there, we'll take a look at what's happened to each one of the histograms.

It's been spread out across the width of the entire graph here. Also notice the Composite view. The shadows are now a combination of red and green overlapping each other, so we have some cyan spikes going on there and then the red shadow show up later. So because the red shadow detail is brighter, the shadows are showing up as red here inside the image window. And that's a thing about the Auto Tone command. It has a habit, if anything of going overboard we're removing the color caste's concern. So as oppose to just neutralizing the color caste, it often ends up sending the color caste in the opposite direction.

So where we used to have a green caste associate with this money, we now have a little bit of a red caste going on. So, that's the Auto Tone command, let's go ahead and compare that to Auto Contrast, I will click on the Auto Contrast layer here inside the Layers panel, up here in the Navigator panel, I will click in the lower left region, so we can see that layer. Then I will go out to the Image menu and choose the Auto Contrast command. Now, very much like Auto Levels, it goes ahead and pulls apart that histogram. So it spreads the histogram to fill the entire graph, but it does so, strictly on a composite basis.

So it doesn't work channel by channel. It looks at the composite histogram and stretches it and the result is something along these lines, where we get an enhanced degree of contrast, so this is the Before version of the money, low contrast, this the After version, high contrast, however we still have the same color caste we had before, that is the highlights remain green, the shadows remain a little bit greenish and the money remains green overall. And of course where this money concerned, that's appropriate.

So far, again where this image is concerned this is the most accurate correction. All right, I am going to go ahead and scroll to the right here, again inside the Navigator panel and I will click on Auto Color on the Auto Color layer to make it active, since it's the remaining layer inside of the composition, and then I will go out to the Image menu, and choose the Auto Color command. Now what Auto Color is going to do, not only is it going to stretch each one of these histograms on the channel by channel basis but it's going to weight the histograms a little differently than Auto Tone did. It's going to seek to neutralize these shadows, and it's also going to seek to neutralize the highlights and then it's going to trying to find what ought to be a neutral color inside the mid-tones and make that absolutely gray which is something the other commands can't begin to do.

So I will go ahead and choose Auto color and we get this effect here. Now, take a look at the Shadow detail. The three histograms overlap each other with the shadows are concerned and as a result our shadows are absolutely neutral now. So this is the Before version of the image, and this is the After version, thanks to Auto Color. We also have very neutral shadows, more neutral than what we saw with Auto Levels and we still have the obvious color inside the image, that is to say the serial no. is green, the seal is green and we have some colorful threads going on in the background and that is ultimately the difference between these three commands.

I will go ahead and zoom out, so that we can see them compared to each other. Top left, we have the original version of the image, that is to say low contrast, green color caste. Upper-right we have the Auto Levels version, possibly the highest contrast of the bunch and in opposite reddish color caste. Down left, we have the Auto Contrast version which delivers enhanced contrast, but keeps the green color caste and then down right, we have Auto Color, more nuance contrast as you can see, and the most neutrality of the bunch. In the next exercise, I will show you how these commands fair when applied to a standard digital photograph.

Video: How the Auto commands work