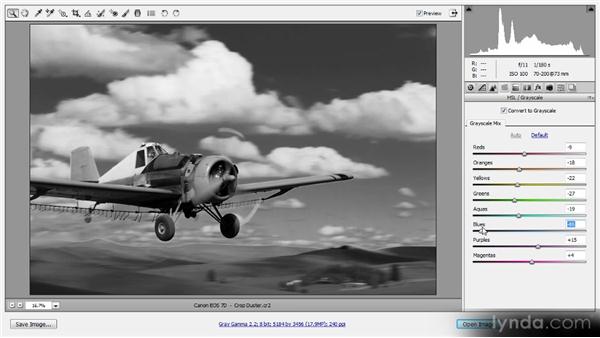 I find that I tend to like black and white images, and so it's fairly common for me to take a color photograph, and convert it to black and white. And Adobe Camera Raw includes the ability to create a black an white interpretation of any photo. In most cases, if I'm going to convert an image to black and white, then I'll start with a black and white adjustment rather than applying basic tonal adjustments first, for example. And so I'll switch to the HSL option. This includes both HSL or hue, saturation, and luminance, as well as grayscale adjustments.

And the first step in actually creating a black and white image, is to turn on the Convert to Grayscale checkbox. This will convert the image to black and white, so we'll no longer see any color but we can then adjust the Luminance values of individual color values within the photo. For example, the sky is probably largely blue, perhaps a little bit of aqua, and so shifting the blue slider to the right will brighten the blue areas. And moving the slider to the left will darken the blue areas, again, mostly the sky. The airplane had a fair amount of yellow in it.

So, increasing the value for yellow will brighten up portions of the airplane and reducing the value for yellow will darken up portions of the airplane, as well as some of the greens in the background that contain a fair amount of yellow. I can also adjust those greens independently. So I'll just go ahead and shift those left and right, for example. And I can continue taking the look at all of the sliders to see what sort of effect each of them has on the overall image and deciding how I want to interpret the photograph, how to interpret that grayscale conversion.

In most cases, I'll start with relatively modest adjustments. So, I won't take things too far for any of the adjustments here in the conversion to black and white photo. And in particular, I want to keep in mind that I'll still be able to apply a variety of overall tonal adjustments to the image. But by working with each of the individual sliders, lightening and darkening the specific areas of the photo based on their original color value, you have quite a bit of flexibility. In interpreting a color photograph into a black and white version.