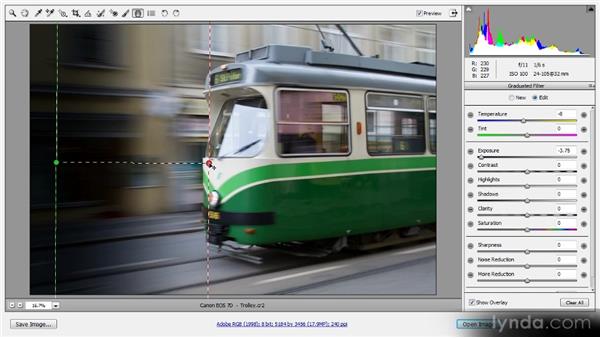 At times you might want to apply an adjustment to an image that transitions across the photo. For example, you may want to darken the top portion of the image, but then have that effect gradually taper off as it moves toward the bottom of the image. For this photo, I'd like to have an effect that only changes the appearance of the left side of the frame. I have a trolley moving through the frame, there's obviously a motion blur going on, and I'd like to sort of enhance the feeling of that motion blur by having the left side sort of brighten up and fade off a little bit. So, I'm going to Define an Adjustment that effects the left portion of the image completely and then tapers off toward the trolley.

The graduated filter makes that adjustment very, very easy. I'll go ahead and choose the Graduated Filter from the toolbar, and I'll apply an exaggerated adjustment, in this case just reducing the exposure significantly so that once I draw my gradient, it will be very easy to see which portion of the image I'm effecting. I'll go ahead and click and drag across the image. You can already see the exposure effect being presented to me. The direction that I drag determines the direction of the gradient, and the distance between my starting and ending points determines how far that gradient will transition.

And fine tune the final position, and then release the mouse. So now I've defined a gradient, I can of course Edit the gradient at any time simply by dragging the controls. Dragging it left or right for example, or up or down if I want to rotate, but in this case I think I'm happy with the way I've defined the gradient, and now I'm ready to apply my targeted adjustments. The adjustments for the graduated filter are a subset of adjustments that are available elsewhere in Adobe Camera Raw. I'll go ahead and increase the exposure in this case. I'm going to reduce contrast just a little bit. I think I'll reduce clarity to get a little bit more of a hazy appearance. Maybe brighten up the highlights in that portion of the photo. And just generally apply adjustments that, sort of, give us this fading off type of effect.

That seems to add, in my mind at least, to the energy of the scene here. At any time, I can turn off the overlay, by turning off the show overlay check box at the bottom of the graduated filter adjustments. And that will disable the display of those gradient handles so that I can see just the image as I continue fine-tuning the overall adjustments for example. I don't want too obvious an effect, I just want sort of a fade, so I'll tone down some of the adjustments here, and I think I'll actually even warm up that portion of the photo just a little bit. That's looking pretty interesting so, I think I'll keep that as it is. I could also add an additional gradient.

I'll go ahead and turn on the new option rather than edit. For example, and now I could add an additional gradient in the image, but in this case, I think only the single gradient is necessary. But with the overlays turned on, I could then switch between those gradients if I want to in order to fine-tune each of them. And if I decide that I want to get rid of a gradient, for example, I want to remove this other gradient I can select it to make sure it's active, and then press Delete on the keyboard, and that gradient adjustment disappears. So the process of working with the gradient adjustment is quite simple.

We define a gradient, and then fine tune our adjustments, and those adjustments will only affect the area defined by the gradient itself. In this case, affecting the left portion of the image, just a small portion of the image completely with that adjustment gradually tapering off to the end point of my gradient. So this gives us a very flexible way to apply some interesting adjustments in a wide variety of situations.