Getting creative with Curves 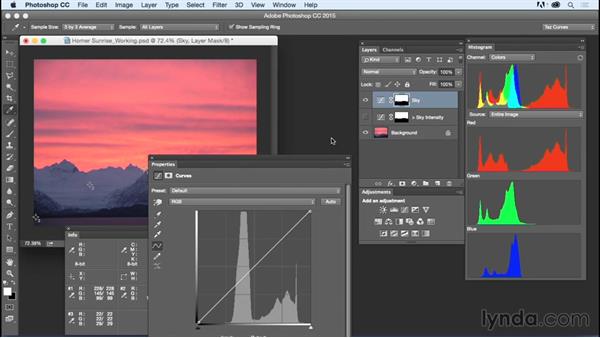 - Well, at this point in the course, by the time you've gotten here, I think you're getting the idea just how powerful curves are and how much you can do with them. Pretty much most of the adjustments we've been making to this point are standard ones of highlights and shadows and neutralization and adjusting foregrounds and backgrounds. In this movie, I'd really like to focus on just going crazy. Having some fun, some creativity, and there's an infinite number of things you can do. Literally. But I thought I'd just do a few things just to get your juices flowing. I'm going to use this photograph I took from my front porch, across Kachemak Bay, of the Southern Kenai Mountains at sunrise.

And you can tell, it's just glorious. And whenever I work on images like this, that have two very distinct tonal and color variations in them, almost always start by making masks because I end up using them at one point or another. So, I've gone ahead and made a sky mask and a mountain mask, that we can load whenever we want to. Alright? So, the next thing that I typically do is I do want to know where the highest and the lightest detail areas are, and the darkest detail areas are so I can monitor them, particularly if I'm being very creative I want to make sure that I'm not blowing out values that may not be apparent on screen, but in fact I am.

So, first thing we'll do is lets go ahead and create a Curves Adjustment. We won't name it anything yet, I'm just going to use this to set highlights and shadow points, or light and dark points as we'll call them here, across the whole image. Alright, so as we see here, the very lightest area of this image is right in here. So we're going to put one control point right in here, and we'll just check that.

Okay, and then command-zero, take that down, and let's go and find the darkest shadow point just so we can monitor it. Left or right side, either one will work fine. Put a color control point there and just check it. Okay, good. There we go. And then I ask myself, "are there any other significant areas in the image that I might want to monitor during my alteration?" Sure, in this image, it's definitely going to be the whites, no.

Okay, so we've got our lightest, darkest, and then we've got our critical point in there, our point of interest that we could adjust. Let's go about making some fun adjustments. So, let's go back to the background, or actually we could just use this curve here. Let's go to the... Click on the curve, and when we look at the distribution of tone in this image, we see there's tone all the way across the image, but I'm suspecting that it would be nice to be able to isolate the sky and the mountains.

So, let's go ahead and do that. Let's go ahead and just throw this away because I'm just going to load the sky mask. Alright, command-option-six is the keyboard shortcut for loading the channels. Command-option and then the number of the channel. Let's go back to layers. So let's just work on the sky. Let's do that. Then I'm going to go ahead and option or alt and click here, and we'll call this "sky." I'm not sure what I want to do yet, so I'll just call it "sky" for now. But I'll typically come back and re-label. And sure enough, we see that we're getting part of the data in that histogram, in terms of it's not the whole histogram we're working with, just the sky histogram.

And I'm looking at this and going "you know, I'm interested in maybe increasing the intensity of the sky." So let's just take this and move this over here. And if you want to, you can hold down your option key and see when you start to lose data. You don't even have to use control points along with this. We just hold that down and drag that in until we start to lose data, and do the same thing here, there we go. And wow, dramatically increase the intensity of that sky with just that adjustment there. Before, and after. Before and after.

And then there's still quite a bit of magenta left in here, so let's go to the blue channel, and click right on the middle of that peak and lower that, and make the sky even more orange as we see. Nice, interesting, okay. Here we go, let's go back to the master channel and see, well, I think we can leave the master channel. We could adjust brightness or contrast, maybe go a little be increased in contrast through the whole image.

There we go, nice. So what we've done here is made a nice orange sky. So that's fun. How about, let's work with the foreground a little bit? Go back to the background, let's load the foreground, command-option-seven to load that mask, and let's add... We'll just call this "foreground," not sure what we're going to do yet. Okay, we can see, not a lot of data here in highlight to mid-tone. We maybe want to lighten this a little bit.

We can see lots of broken data here, and that's probably just noise. So we could come all the way, I just think that's obnoxious. So we'll just do a little bit of lightnening and maybe darken the shadows just a tad bit. Let's look at control point number two, and look at this: 94, 97, and 135. 94 and 97, they're pretty close to each other. Big, blue cast here. Hmm. I wonder how that would look if we neutralized this against the more orange sky. Let's go to the blue channel, option-five, and we'll just click on the middle of the blue area and then just lower this while we monitor the blue value that we see here.

And we'll just take that all the way down to 93, 94, yeah. If we want to make it completely neutral, we can go to the green channel and raise or lower that a little bit if we want to. That's interesting. It creates a neutral foreground and a really bright sky in the background. Let's take and do the increase in sky intensity.

And then the orange sky. Interesting. Sky orange, O-R-A-N-G-E, there we go. And foreground, we did a lighten and neutral. How interesting. And you can combine any number of these together. In fact, if we kind of like this set, we can do a shift-click here, and then go "new group from layers," and we'll call this "Color and Tone Adjustments." Whoops.

Alright, we've got time for one more. Let's go ahead and turn this off. Let's try a solarization, because that's always fun. Let's go ahead and option or alt and click, and solarize. There are solarizing filters. Yeah, I know that. But let me just show you how to do this with curves because it gives you absolute and complete control over this. So if we take this and we put a midpoint here and we drag this down, and I'm just working on the master curve here, right? We solarize the image, and then by controlling the position of the midpoint, we can adjust the brightness, intensity of that solarization.

And if you want to, you can put additional points on here, to create very special solarized effects. If you like. These kind of adjustments are not typically going to be available to you when you're working in just a straight solarization filter. You don't have the ability to alter these individual tonal areas on your image. And not only that, but you can go into the individual colors, let's say, let's go to the red, and then you can adjust the impact of the solarization on the red values in the image by raising or lower the red values.

So you can end up with some very, very interesting effects that you can control across the entire tonal range. So, once you understand how histograms and curves work, and how to adjust tone, you can pretty much have your way with these images. This one was awfully fun to create. Completely unnatural, although there are times when it darn near looks like that up here in Alaska. Alright, have fun.

Video: Getting creative with Curves