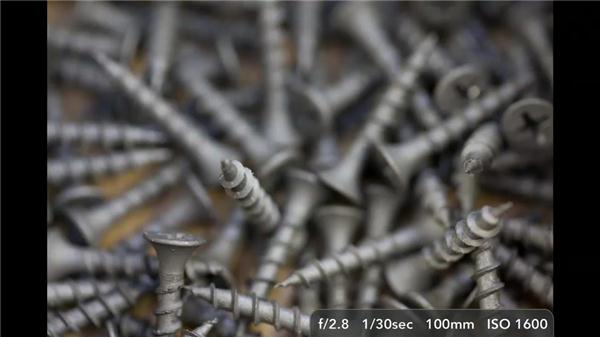 We finally decided to leave the studio, and head out into the field for some field macro shooting, because very often the things you run into in the field are a little more complicated. And, we almost made it out the door, but then we got side-tracked by the Lynda workshop here. This is where the crack team of Lynda set builders works to construct sets, and that involves saws, and screws, and lots of other things, very similar to what you might have in your own garage. And so, I want to talk again about just the ability to shoot around your own house, or just out on the street.

One of the really weird things about Macro shooting is you will often find interesting subject matter in places that you just wouldn't normally shoot. The other day, I found myself actually standing in the gutter of a street in San Francisco shooting some piece of garbage or something down on the street. As you get into the small world, you'll just find lots of interesting things. And, what I'm finding in here is texture. And, we haven't talked a lot about that. There is just a lot of interesting texture that begins to appear in macro shooting. Now, I don't have great lighting in here. It's pretty much just even fluorescent lighting, there are a few sky lights.

So, I'm not being drawn to a pretty place of light, or things like that. I'm just being drawn a line. This box of screws I'm finding very interesting; it's got a lot lines and repeating textures in it. You can find that sort of thing around the house. Another interesting thing you'll find in an environment like this are very familiar objects. I saw these pencils, these pencil erasers, and it's interesting to get close to the familiar. And, macro gives you a way of may be presenting it in a new manner in the way people aren't use to seeing. So, I want to talk real quick about how I'm shooting.

I've got my monopod, because it's pretty low light in here. It didn't look that way to me at first, but Macro is always going to be a little darker than you're expecting, because you are getting into areas that don't get a little of light. Obviously we were seeing that in the studio, but we were shooting very, very close. Here, I'm at a pretty easy macro level, and still having trouble with light, so I've brought my monopod. I have a choice of macro lenses. I still, even without deciding to go with the 100. The 180 would have let me have an easier time with the position of my camera and my body while trying to shoot back into the nooks and crannies of places. But it's dark enough in here that I really want the stabilization.

That's a real winning feature of this Canon 100mm macro is the stabilization. So, I put my ballhead on my monopod. It gives me a lot more flexibility than mounting the camera directly to the monopod. I also have to play with the height of the monopod a lot. Now, when you're adjusting your monopod, it's best to, as much as possible, work with the higher releases before the lower ones, because those are the ones you have easy access to. So, if I want to make an adjustment, I'm making it to the top of the monopod, not the bottom.

That gives me a little more flexibility. And, it's not that I clip the camera on here, and hold it in a particular position. I'll lean with the monopod; I'll tilt it around. The point is it gives me at least one axis of steady shooting. It's also something I can push against once I lock the head down, no matter what position it's in. And, that gives me a little more flexibility. So, I'm just going to frame up a shot here, on these screws. Now, of course, I've still got my depth of field issues that I'm dealing with. I'm at ISO 1600 at f/28 in here; I'm at 1/30 of a second.

So, even with stabilization and a monopod, I need to be careful about camera shake. And, what I'm doing in a situation like this is, even though I'm just shooting something that's ultimately just a texture, I still want to have some possible point of focus. So, in that image . . . . And, I'm just getting started here, so I don't really know what the final shot is yet, or if there is even a good shot here. In that image, there is one screw that's poking up, and I focus on the end of that. I've got very shallow depth of field. I'm hoping maybe that can serve as some kind of compositional anchor.

It's very, very difficult to tell what these shots are really going to look like because of the depth of field issues, just like we were finding in the studio. So, you've got to work them a lot. Even trying to review them on the back of the camera is not real telling, because even there, you're not getting necessarily an accurate view of your depth of field. Notice I'm working the handle of the ballhead a lot. I'm really moving the camera around a lot. The other thing I'm going to do is bracket my depth of field, because I'm not sure if I can really get the deep focus that I want, or where that focus should be. I'm shooting some at 2.8. And now, I'm going to stop down to 5, which gets me a shutter speed of a 1/5 of a second, which is awfully slow.

So, I think I'm actually going to even tell it to underexpose by a stop to speed things up. That gets me up to a 1/10 of a second. And, you can hear there the slow shutter. I'm far enough out that I can work the focus ring, and even autofocus, and still get some control of my focus without having to worry about just moving the camera in and out. But I have a feeling of all of these are going to be blurry. So, something I might do if I'm not sure if I can get the focus straight is start to use the burst feature on my camera.

I'm going to take it off of the monopod, and I'm going to switch really to just focusing by moving the camera in and out. I'm also putting my camera into high-speed drive mode. So, as long as I hold the shutter button down, I get bursts of images. And, what I'm going to do now is pick a point of focus, and push the button down, and push the camera through the scene, and with the hope that something in there will be good focus. This camera doesn't have a super-fast burst mode.

I'm shooting with the Mark II now. I kind of wish I brought my Mark III, because it's a little bit faster. And so, this is very often a way of . . . if you're not sure that you can hold the camera on the point of focus in drive mode, you're knocking off a bunch of images around that point of focus, and hopefully one of them is going to be sharp. So, all of these are things that I'm going to employ as I hopefully, one day, make it back outside. I don't have to worry about wind in here, so this is a nice way for me to start practice with handholding, and my monopod, and some found objects.

I'm trying different distances, because with this lens, like the 65, I can really move to different focus distances. I've got my hand always understanding where this focus switch is, because I'm also doing just some close-up shooting. So, being able to switch to the deeper focus modes makes a big difference. I found lots of nice texture in here. I really like this dark board that I've found, which has some cool texture, and just lots of strong lines. And, here you see me just playing basic compositional ideas. I like the piece of chalk that was down below it. There is this tool cabinet full of screws and things; this is where I found the pencils.

There is also these nice textures, and objects, and line. Again, don't pressure yourself. Think of this kind of thing as an exercise. Maybe you'll come out with a great shot. At the very least, you're going to come out with some really good macro practice.

3/29/2013
It's a small world, and capturing it with a photograph can be challenging. In this course, photographer, author, and teacher Ben Long takes you on a fantastic voyage into the realm of the tiny, detailing the gear and shooting techniques necessary to capture extreme close-ups of everything from products to posies.

After touring the possibilities of macro photography, the course details essential gear at several price levels, including lenses, flashes, and other accessories. Next, Ben explores the special challenges of macro photography: dealing with moving subjects, working with extremely shallow depth of field, focusing, lighting, and more.

The course also explores advanced close-up tools and post-processing techniques, such as using Adobe Photoshop to "stack" multiple shots to yield wider depth of field than a single shot can convey.
Topics include: