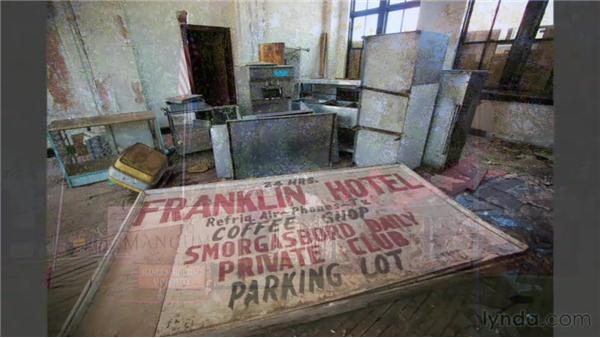 Behind me and all around me is the town of Mangum, Oklahoma. It's a little town about ten miles from the Quartz Mountain State Park Lodge where we have been staying. It's a little farming town that, to be honest, has seen better economic times. There used to be two railroads running through town so they could ship out lots of cotton and cattle and things, but that industry moved away, leaving a lot of abandoned buildings and kind of run- down spaces and crunchy textures and just generally great photographic opportunities. It's also a town of some of the nicest people you'll ever meet, and you're going to see us shooting a lot in this town and around the region. And you're going to see us having access to a lot of spaces.

There are two ways you can shoot a town like this. You can just come in and get out of your car and start shooting, or you can do what the professional photographer does. When you see pictures in National Geographic or a News magazine or on the front page in The New York Times of some amazing space and some town or some faraway place, very often the photographer has gotten that picture not just because of their photographic skill, but because they've gone into that area and spent a lot of time--days, possibly even weeks-- getting to know the people, establishing rapport, building trust. That's what we've done here.

Now we haven't had to spend that much time because the people in Mangum are so friendly and because I had been spending a lot of time bringing students here over the year, but still we have a level of access that you wouldn't get if you necessarily just stepped out your car. So if you do want to shoot in a place like this, you don't want to come into town and just grab your camera and immediately start shooting. You'll get some stuff. But if you really want to go deep, you want to leave your camera in your car or in your bag or in your hotel room and spend some time just walking around, getting to know people, trying to get a feel for the town, starting to talk to people. You can look for certain resources.

For example, a town like this may have a small newspaper, like Mangum does. Go talk to the guy of the newspaper office. He can probably tell you who the really interesting people are in town. Or go to the local diner or the local restaurant, things like that. Right here on the town square there's something called the Mangum Welcome Center. They're very welcoming and they'll tell you all sorts of things. By working with these people, we've gotten to hear about interesting places, we have had the opportunity to be put in contact with the people who can get us into those places, and it's gotten us a much deeper level of access. None of that had anything to do with our camera. That had to do with telling people what we're up to, letting them know that we were interested in their story.

Now the fact that we've gotten access to this place isn't just because small towns in America are often very friendly. I have found in shooting in South Africa, Central America, Turkey, Russia, all over the place, that when you come into small towns like this and you express interest, genuine interest in the people, they'll open up to you. It's nice to have attention paid to you that way, and they like that feeling. They'll let you into their houses, they'll tell you their stories, and eventually they'll let you take your camera out and start taking pictures. When that happens, it's often nice to be able to give something back to them, so I would offer two pieces of advice in that regard.

If you ask someone if you can take their picture or come into their house or come into their building to take a picture, don't go, ooh, I'm really imposing, okay, I am just going to--I am going to work quickly and take the best, you know, take the best picture I can and get out. No, take your time. Take the best picture that you can. They're giving you their time; make the best use of it that you can with your skill level. Also, try to give them something back. Tell them--ask them if they have an email address or a mailing address. If you post your images to a Flickr page or to a blog, give them that address and tell them, hey, these pictures might end up on this web page, go look for them. Or send them prints later, email them photos, try to give them something back.

You may find that you will then establish a relationship with them over the long term and get to know them even better, and that you can come back to that place and get even deeper access. So you're going to see us shooting inside an old abandoned hotel, an old power station, a lot of places around the region. The way we've gotten those pictures is by establishing rapport and trust and getting access to those places. If you're shy, that can be a difficult thing to do, but I'm afraid you've simply got to do it anyway. You've got to get over that and trust that people will talk to you and that you can get back kind of access.

That's what you're going to be seeing through the rest of this course, and that's how we've done it.

12/22/2011
Composition can make an interesting subject bland or make an ordinary subject appear beautiful. In this course, photographer and author Ben Long explores the concepts of composition, from basics such as the rule of thirds to more advanced topics such as the way the eye travels through a photo.

The course addresses how the camera differs from the eye and introduces composition fundamentals, such as balance and point of view. Ben also examines the importance of geometry, light, and color in composition, and looks at how composition can be improved with a variety of post-production techniques. Interspersed throughout the course are workshop sessions that capture the creative energy of a group of photography students; shooting assignments and exercises; and analyses of the work of photographers Paul Taggart and Connie Imboden.
Topics include: