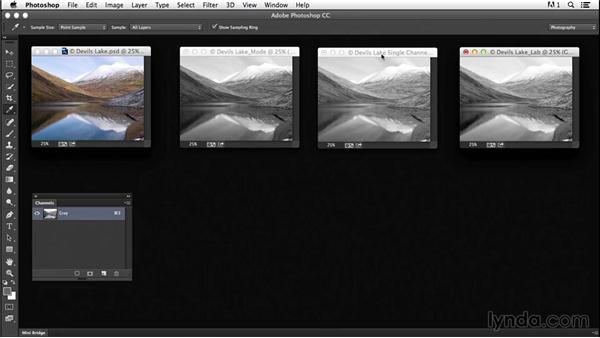 In this movie, I'd like to show you a range of RGB color to grayscale conversion tools that are built into Photoshop. And there's a lot of different ways to go to grayscale from color when you're working in Photoshop. And then what I wanted to do is finish up with and show you the fundamental tool that we're going to be using for converting our images into grayscale from color, and then you'll understand why we're going to be using this tool. Of course it all has to do with control. First thing, let's address this whole issue of why are we starting with, you know, RGB color images rather than just grayscale? Well as you're going to see in a moment, if you start with a grayscale image, most of the time you have a single channel.

If you start with an RGB color image, which isn't really color at all, as you'll see here, is that you have three grayscale channels, called red, green, and blue, but they're really grayscale. And the huge advantage of this is, notice that there's different tones on different portions of the image on all three channels. And when you have these three channels, you can add them, you can combine them together, and mix and match the tonal values to get just the look and feel and brightness and contrast and tonal separation that you want to create just the grayscale images you want. That's why we're starting with RGB color images.

So let's take a look at the few of the tools and we're going to see what happens. As we go through this, watch what not only happens to the image, but also watch what happens to the Channel panel as well. I'm going to put this down here. And I'm just going to reduce this, and we're going to make some copies here. By going Image and then Duplicate, notice I've made a keyboard shortcut, F10, just so we can do things a little bit faster. All right, and we're going to call this the mode conversion. And this is the simplest way to go to grayscale in Photoshop, where you go Image > Mode and go to Grayscale.

And then you discard the other channels. Watch what happens to the Channels panel. What Photoshop does, it goes through its own internal default conversion by combining the Red, Green, and Blue channels in its own way to create the image that you want, and sometimes, this looks okay, and sometimes it doesn't. But the point is, you don't have anything to control. You kind of have to just take what Photoshop gives you. There's other methods. Let's take a look at another one. And we'll call this the single channel version. And in this one, we can view the three channels that are available to us. And then choose the one, ew, blue's not very good.

Maybe red is the best of the group here. And then we can convert that to grayscale and discard the other two. Well, this at least gives us a choice. It may not be great, may not be really good control but it's some control. We can do better, let's call this one. Do another version. We'll call this one the Lab version. And sometimes you can get some pretty nice conversions using this. Watch the Channels panel here. I'm going to go Image > Mode and go to Lab Color. And notice what this does, it takes all the grayscale values, all the luminance values or lightness values, puts them on one channel.

And then when you go Image > Mode and go to Grayscale, it discards those other two color composition channels and gives you just grayscale. And notice each of these versions that we've created, we end up with a single channel of grayscale in our Channels panel. So once we've done it, and that's kind of it, see what else we can do. And let's call this one the Channel Mixer. And in the Channel Mixer we come underneath Image, and instead of going to Mode, we go to Adjustments. And we come to something called Channel Mixer.

And you can see right off the bat this is going to give us a lot more control. Here we can say I want, say, 60%. Let's click on Monochrome. Let's say 60% of this we want to be the Red channel, you know what, and then maybe 20% we want to be the Blue channel, and 20% Green channel, or thereabouts. And then click OK. That gives us a lot more control, doesn't it? And notice in this case we end up with three grayscale channels which is very nice. But this doesn't, you know, give us maybe all the control that we would like to have.

That's not bad though. Use that for quite a while. And then the tool that we're really going to use, and we're going to call this the Black and White tool because that's its name. And again, underneath Adjustments, we go to Black and White. And this gives us not only control of red, green, and blues, but yellows and cyans. And it's got built-in combinations, right? We can mix the two together. Reds and the green with yellows, and the blues and the cyans with magentas. We can add all these colors together. Gives us a lot more control over our image. All right and see here we can bump up the reds and the yellows.

We can back off on the greens, and we can work the cyans and the blues to give us much darker skies. And then say, OK. So lot better control. And we can really get the kind of image that we want right there. But one other thing we need to pay attention to is in all of these cases, even this with the Black and White tool, if we do it that way, if we just go and apply the tool to it, we can't really undo it, we don't have much editability. So one other thing we're going to add, instead of applying this tool directly from Image and Adjustments, let's make another version of this and let's call this the Black and White adjustment layer version.

In this case we're going to use the same tool, but we're going to get to it by going underneath the Layers panel, and choosing Black and White. Brings up exactly the same controls, they look a little bit different, so we can, you know, crank these up the way we like them, and take down the cyans, and take down the blues. Get just the contrast that we want. And the big advantage here, of course, is that at any time in the future that I want to I can come in here and I can just click on this and I have full editability. So we're going to use this Black and White tool because it allows us to combine all the tonal values that are in our RGB quote unquote color image with the three channels.

And get exactly the look and feel we want. Combine the grayscale values to get to it, so right brightness and contrast, and tonal distribution. So there's color conversion to black and white. Those are the fundamental tools that we're going to be using. We'll add a few more a little bit later as well.

7/14/2014
Photographers like Ansel Adams taught us to look differently at nature: not in terms of color, but instead emphasizing tone and contrast. Converting images to black-and-white reveals these hidden depths of composition and focus a viewer's attention on forms, textures, and fabrics. In this course, Taz Tally teaches you how to use modern techniques to transform color images into majestic black-and-white landscapes, using the modern photographer's favorite tool: Photoshop. Learn how to evaluate images with the Info tool, convert RGB color images using Photoshop's time-saving black-and-white presets, and make more advanced adjustments with the black-and-white custom sliders, masks, and adjustment layers. Plus, learn finishing techniques, like sharpening, that will make your images look their best when it comes time to print.
Topics include: