Examples of practical 3D use in modern design 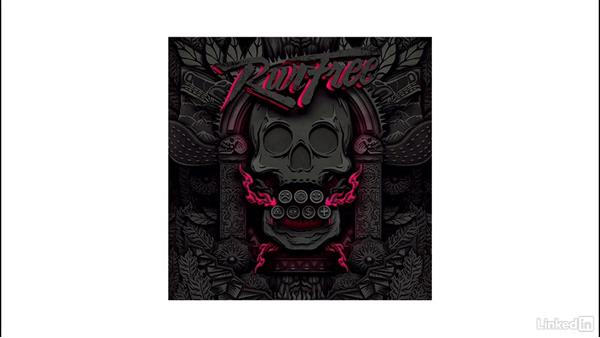 Join Justin Seeley for an in-depth discussion in this video Examples of practical 3D use in modern design, part of Photoshop for Designers: Practical 3D Designs.

- [Narrator] As I said in the introduction movie, 3D is really taking the design world by storm. But you may not even be aware of some of the ways that people are using 3D, so I thought I'd give you some examples of how you can use 3D in your designs in some not so, shall we say, crazy ways. Because that's the key with 3D in my opinion, is keeping it subtle, yet at the same time, making a big impact. So first and foremost is 3D text. A lot of people are turning to 3D text in order to create some really photo-realistic looking displays, like the on that you see here.

This could be used in graphics for television or film or even incorporated into posters or business card design. You've also got this, which is sort of a subtle take on 3D. Notice that part in the middle that says "Oh my", that part right there, that's 3D. And you can also see some of the objects around the outside of this have also been done in 3D, in conjunction with photo elements themselves, like the television and the paper mache robot, and all that kind of stuff that's in here. There's a lot of mixture here, and I think that's a good way to go about it. Mixing in actual photo elements with three-dimensionally created things is a very good way.

It's a mix of the real and the surreal, and it really goes together nicely. Next up of course is recreating some effects from the years gone past, and so things like this. Like this 80s text effect, can be done really easily using 3D extrusions inside of applications like Photoshop, style it up with a little bit of a backdrop like you have here, and you've got the makings of an awesome video game poster. This is really hot right now, retro looks. This is just big time right now, in the design world. You've also got this, where people are creating almost like photo-realistic textures and things like that out of 3D objects. So notice right there at the top where it says "Run Free" that looks like it's almost carved out of stone, and then it's got that nice highlighted hot pink accent behind it.

This is another example of using textures and extrusions together in order to create layers and depth inside of a design, where otherwise it wouldn't be as effective, because all of this really is the same color palette, so it would all really run together if it weren't for the layers of depth that they've added by using these three-dimensional elements inside this design. Finally, the other ways that people are using 3D a lot today are by creating their own product mock-ups. So by using 3D space, you're able to apply logos and color treatments and wraps to things like boxes, business cards, and even vehicles.

This is a huge deal for a lot of people, because many times when you are trying to show a client the work that you've created, you want to be able to show them how the work is going to look in real life. Well that's hard to do if you're designing a pizza box or if you're designing something like a bottle, like you see here. Or even if you're trying to do a business card, like this. Being able to put those into three-dimensional space so that the client gets and idea of what they're going to actually going to look like when they're able to see and touch those things in real life is really going to give you an edge when you're presenting your final work to the client.

Now if you're curious about where you find my inspiration for 3D products like the one you've seen here, the best website I've found for this is Behance. You can go to Behance.net, as part of your Adobe Creative Cloud membership you can sign up automatically for free, no big deal. Just sign up, join up. I've got a course on it that you can watch, as well. You can go to Behance and just search for 3D or just simply start browsing through people's portfolios and you'll start to see examples of how people are using them. It's a great website not only for finding inspiration, but also communicating with other designers and figuring out their thought process as well.

So join up on that community and start a conversation today.

11/16/2016
3D is the new "drop shadow"—sometimes overused, but in the right place it can make a dramatic difference in a design. Learn how to use Adobe Photoshop to create 3D elements for commercial design work, in this course with senior graphic design instructor Justin Seeley. These hands-on techniques are for designers who want to add some 3D elements that will take their work to the next level, without going overboard. Justin walks through three projects—an advertisement, a product shot, and a logo—adding the kind of 3D details that make images and text pop off a page or presentation.
Topics include:

Video: Examples of practical 3D use in modern design