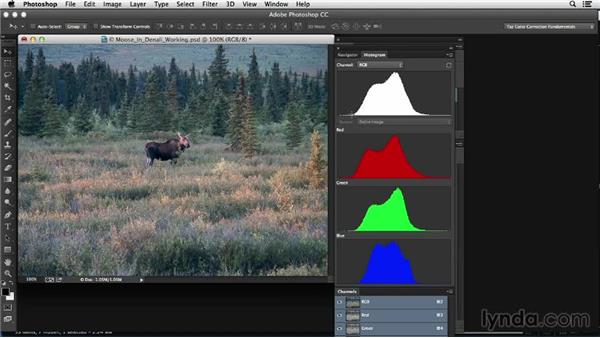 In this movie, I'd like to talk about the evaluation of this image. Let's take a look at what some of the challenges of this image are, by looking at its data. And talk a little bit about what we might want to do, in terms of adjusting this image. here we have a mama moose in Denali National Park up in Alaska. And it's image that was shot just before sunset. We've got low angle sunlight here. As you can see by looking at the image, it's a relatively low contrast image. Which is very typical of images that are shot early in the morning, late in the evening and to kind of take a look at where the data is in the image.

Let's go ahead over to our histogram, in fact we can just move our histogram over here to help us evaluate. And, when we look at the master histogram. Here, let's just take a look at the overall tone distribution of the image. We can see why the image is, indeed, low contrast. Because, most of the data is focused right around the mid tone. With very little or no highlight to quartertone data And every little or no of the three-quarter toned shadow data. Now, this is very typical of the histogram that you see, in images that have low contrast.

All right. Some low-contrast images, all the data is focused on, like maybe the shadow end or some on the highlight end. In this case, we've got a low-contrast image, because most of the data is focused around the mid tone. So we're lacking the white, we're lacking the blacks. And the first question we ask ourselves is, do we like the image this way or would we like to improve it a little bit? I mean, this is kind of how it looks is, kind of low contrast when you look at the scene. But what if you wanted to punch it up a little bit? And maybe that's what we want to do, we'd like to increase the contrast of this image.

And we're going to use our histograms to help guide us. So our first goal is going to be, to increase the contrast of the image. Second question to ask here though is, is there a color cast and if so do we want to remove it? Well thats when we move to the individual histograms and lets go ahead and switch here to our colors and we can see by looking at the highlight end here. See the red is furthest to the right, then the green and then the blue with all the way over here. And we can see that with the imposed histograms. One on top the other with the red is all the way over here to the right, blue is way back here.

Al right, so there is a bit of a red and then plus a little bit of green which make yellow of course, color cast which we would expect with the end of the day sunlight lit image. So we could choose to neutralize this, that is take out most of the color cast or leave it as it is. For this project we are going to leave it as it is, because it is a sun set picture and we don't really want to change the color balance to the right balance, we like the liked the warm glow in their. We'd like to improve the contrast a little bit. So that's what we're going to do. We're going to adjust this image, so that we keep the color balance, but improve the contrast.

10/14/2013
Low-contrast images pose a special challenge when it comes to color correction. Join Taz Tally in this quick project-based course, as he shows you how to analyze a low-contrast image using histogram data, and select the proper tools in Adobe Photoshop to correct its problems.