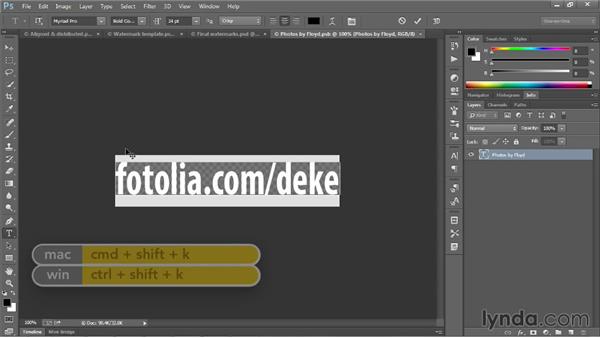 In this movie, we'll stylize our type, as you see here, by assigning a layer effect to this all-type group that we're going to create in just a moment. And then we'll update the true clones in order to create this final effect here, in which we have the URLs listed in the left and right columns. And the final numbers here in the center. And, by the way, this first file number is the guy with the bicep and the second one is the tiger. Alright, I'll go ahead and switch over to the image in progress. And, I'll press control semi colon or command semi colon on a Mac in order to hide those guides.

And now what we need to do is take the left, middle and right groups and group them. Into another group. So, I'll click on a left group, Shift-click on a right group. And then, I'll right-click inside the image window, and choose Group From Layers, which will put those three groups into a new group. And I'll go ahead and call this new group All Type, like so. And then click OK. And you can now see, if I twirl open this new group, that it contains left, middle, and right. Next, I'm going to reduce the fill value, up here in the layers panel, to 20% and then finally, I'll go ahead and drop down to the effects icon and choose bevel and emboss, and for the most part the default settings are exactly what I'm looking for, that is to say, we've got an inner bevel, the depth is 100%, the size is five pixels, and so on.

Down the list here. The only change I want to make is to raise the highlight modes opacity value to 100%, and then I'll go ahead and click okay. All right, now I want to edit those true clones. And so I'll start things off by twirling open the right group. And it doesn't really matter which one of these layers you double click on, because they're all linked to the same smart object. I'll just go ahead and double click on the middle one And that will bring up this photos by Floyd text. To edit the text, double click on little t here inside the layers panel, and that will switch you to the Type tool and select the text.

And then I'm going to change the text to Fotolia.com/DEK. And now I'l pres contorl a or command a on a mac in order to select that text. I'll press ctrl shift k of cmd shift k on a Mac to turn off the alt caps so that we have lowercase characters. I also want to make the type a bit bigger so I'll press ctrl shift period or cmd shift period on the mac a few times in a row in order to take the type size up to 28 points. Now I'll press the enter key on the numerical keypad to accept my changes.

And then, you want to go up to the image menu and choose reveal all which if you loaded D keys, you can see that I've given you a keyboard shortcut of ctrl shift alt b or cmd shift opt b on the Mac because I already assigned ctrl shift alt or cmd shift opt a to flatten all layers. Anyway, I'll go ahead and choose that command. And that does reveal all the text and now we're ready to save our changes by closing this file and then clicking on the Yes button here on the PC or the Save button on the Mac. And you can see that that goes ahead and updates all the text.

All six instances, that is to say, that are associated with this smart object. Now these two middle ones are independent smart objects. To modify them twirl open this middle folder. And double click on either one of these thumbnails. In order to open this version of Photos By Floyd double click on the little t to switch to the type tool and select the type. And this time I'll call this guy File Numbers plural colon and I've already copied these numbers to the clipboard, so I'll just press ctrl + v or cmd + v on the Mac.

To paste them. Then I'll press Ctrl-A, or Cmd-A on the Mac, to select all the text. Press Ctrl-Shift-K, or Cmd-Shift-K on the Mac, in order to get rid of the all caps. Press Ctrl-Shift-period, or Command-Shift-period on the Mac, a few times, in order to raise the type size to 28 points. And then press the Enter key on the numerical keypad To accept your changes. And now, return to the Image Menu and choose the Reveal All command in order to reveal all the text like so. And in case you're following along with me, these are the numbers.

Really, it doesn't matter that much but just letting you see 'em. And now, for our Shift Tab to bring back those panels. Close the image. Click the Yes button here on the PC, the Save button on the Mac. And we end up updating those two instances of that particular smart object, like so. And that, friends, is how you edit the original smart objects and automatically update the true clones, here inside Photoshop.