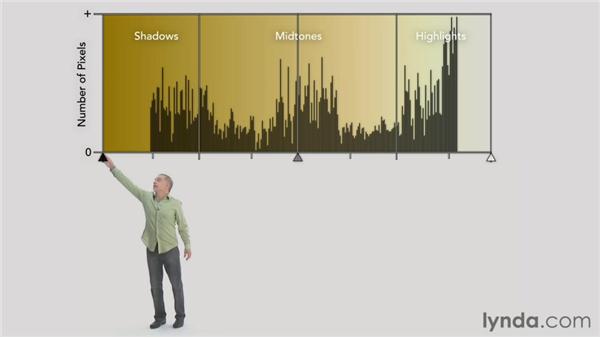 Back in Chapter 7 of my Fundamentals Course, I introduced you to the concept of Luminance, and I show you how to use Photoshop for most basic Luminance Enhancement command, Brightness Contrast. In this chapter we kick things up a notch and take on a more powerful luminance adjustment feature known simply as Levels. Remember the histogram, it's that bar graph of every luminance level in an image, from black on a far left to white of the far right.

The levels command sets the histogram on a slider platform with three triangular controls, one black, one white, and one gray. Now if for the sake of demonstration, I'll stand in as the problem image, as you can see, I'm low contrast and washed out. Your mission, correct me. You increase my contrast by dragging the black triangle to the beginning of the mountainous histogram, and the white triangle to the histograms end, then you drag the gray triangle, known as the gamma control, to modify the brightness of the Midtones.

Drag the gray triangle to the left to brighten the Midtones, also known as expanding them. Drag that gray triangle to the right to darken the Midtones which corrects for a washed out image. See, I'm all better. Nice work! And that's just the beginning. There's an Auto button that attempts to automatically correct an image. You can preview clipped pixels, and you can adjust each channel independently to correct color balance.

Levels is one of Photoshop's most powerful features, and it's the kind of command that takes some folks years to master. You'll have it figured out in a single chapter.