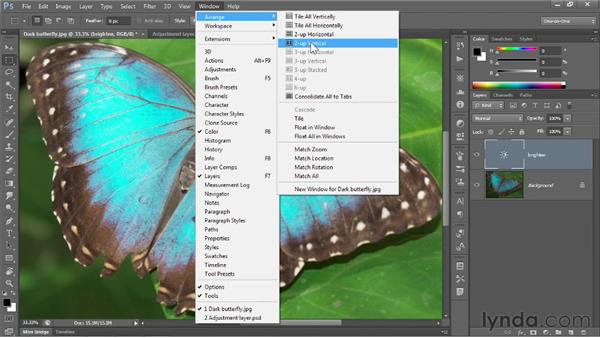 In this movie, I'll show you a few tips and tricks for working with Adjustment layers. I've save the corrected version of the light butterfly as Adjustment_layer.psd found inside the 07_luminance folder. Now I'm not all that happy with the name of this adjustment, because after all, it's my only brightness contrast layer and it really doesn't state what the layer is doing. So I'm going to double-click on the layer name and call it Darken. All right, now let's switch back to the dark butterfly image and let's say I want to re-express the adjustment as an Adjustment layer.

But first, I need to undo the static adjustment. So I'll go up to the Edit menu, the Undo command is dimmed, because the Undo command only undoes the last operation in the image I performed the operation in, which wasn't this one. So what I need to do instead is either back step in the History panel or I can choose a step backward command, which has a keyboard shortcut of Ctrl+Alt+Z or Command+Option+Z on the Mac. And that goes ahead and undoes the adjustment as you can see. All right, now let's say I want to create a Brightness/Contrast adjustment layer, but I want to name it as I create it.

Well in that case, you press and hold the Alt key or Option key on the Mac, click the black/white icon at the bottom of the Layers panel and choose the Brightness/Contrast command. And I'll go ahead and call this layer Brighten and then click OK. And I'll bring up the Properties panel just as I did before. Now notice that neither of the values are active at this point. You can activate the first numerical value from the keyboard by pressing Shift+Enter or Shift+Return on the Mac. And then I'll dial in a Brightness value of 100, press the Tab key and dial in a contrast value of 50, which were the same values I applied before.

All right, now let's say I want to get these butterflies matching each other. We'll go ahead and hide the Properties panel, then I'll go up to the Window menu, choose Arrange and choose 2-up Vertically so that I can see the butterfles side by side. I'll go ahead and scroll them independently here so that we can see the bodies of the butterflies. And it looks to me like the one on the left could stand to be brightened up a little more. And then the one on the right has a little bit too much contrast. So I'm going to start by editing the active image, which for me is dark butterfly.

To edit in the Adjustment layer, you double-click on this thumbnail in the Layers panel and that brings up the Properties panel. Now I showed you how you can select the first value by pressing Shift+Enter or Shift+Return. You can also select either value, Brightness or Contrast, by just clicking on its name like so. You have the option of scrubbing a value by dragging directly on the word Brightness or Contrast. If you want to change the value more quickly, you can press the Shift key in order to change the value in increments of 10.

You can also press the up arrow key to raise the value, the down arrow key lowers the value, Shift+Up arrow and Shift+Down arrow raise and lower the values in increments of 10. All right now I'm going to Tab to the Contrast value and take it down to 30. So I have a Brightness of 110, a Contrast of 30 inside the dark butterfly. Now I'll switch over to the formerly light butterfly, double-click on its Adjustment layer. The Contrast value is still active from the previous image. I'm feeling like the body is a little bit too dark here so I'm going to press Shift+Up arrow to raise that Brightness value to -35 then I'm going to press the Tab key and take the Contrast value down to something around 50.

And we end up getting a pretty darn good match. So I'll go ahead and hide the Properties panel. Now they're never going to be absolutely identical, because of course, they are different butterflies and they were captured in different conditions in the first place. But the fact of the matter is, because we're working with editable Adjustment layers, we can modify our settings any time, and as much as we want.