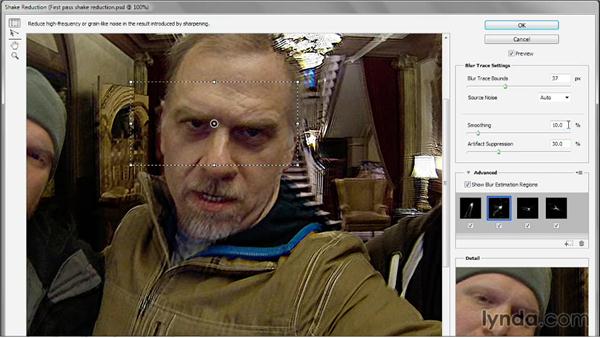 In this movie, we're going to take a look at the advanced shake reduction controls. Specifically, I'll show you how to draw and modify what are known as blur trace boundaries, which allow the shake reduction filter to evaluate multiple portions of an image. So you can see that we've got a lot done here. This is the original version of the image and this is our first pass at correcting it. But the final version of the image is quite a bit different. Notice that we've got some details floating back and forth here between these two versions.

And that's because the final version of the image here is evaluating not only Max's face, but it's also evaluating mine and James. So, let me show you how that works. Go ahead and switch back to the image in progress and I'll double click on the shake reduction smart filter there inside the layers panel. And now notice if you twirl open Advanced, which may be twirled open for you already, then you end up seeing that pin with the marquee around it, which represents the full area that is being evaluated inside the image. So right now, we're only correcting for that one portion of the image and nothing more.

We're applying the correction across the entire image of course, but shake reduction is just looking at this region right here. But notice that you can change the region if you want to, and to do so, if you're going to scale it, then you need to make sure your cursor is right on one of these handles like so, otherwise you'll end up drawing a new one. And then notice that things look a little bit different when I scale that down a little bit. I'm trying to scale it more tightly around Max's face. And that ends up doing a better job. You can also drag the pin to a different location. You have to drag directly on the pin however.

But notice that pretty small movements can end up creating big huge differences inside of the image. So I'm going to to put that right there kind of on the side of Max's nose. And now I'm going to draw a new one. Now there's two ways to create more of these blur trace boundaries, or if you prefer, blur estimation regions. They appear to go by two different names. But they are the same, as we'll see in just a moment. But one way to add a new one, is to click on this little icon there, and that tells the shape reduction filter just to add one that it thinks is good.

And if you want to keep working that way, you can just keep clicking on that little icon. If you want to get rid of one of them, if you don't want it anymore, you press the Backspace key or the Delete key on the Mac. Now I'm going to move this guy a little bit and scale him as well, pretty tight around my eyes. I found worked nicely. And notice what you're doing here is you're giving the shake reduction filter more information to work with. And it's sort of regional. So in other words, it's using Max's area, right here, for this left half of the image.

And then when it comes over to my eyes it's using that for the rest of the image. Which means that it's not working so well for James over here. So we'll go ahead and give him his own blur estimation regions, if you will. And you can do that also, by the way, just by dragging. If you just draw one like so, then you'll create a new region. And what I wanted to do was sort of surround the left side of his face, and I actually think I want to move this up a little bit, like so. And you may end up, by the way, getting slightly different results, depending on where you're dragging.

Or you might get very different results, in which case, just keep trying, I guess. And then finally, I'm going to draw another one from here to here. Notice, if you make it too small, it's going to get mad at you and tell you that the region is too small. You may also see a little cautionary icon. That's telling you that your blur trace boundary really isn't working that well, in which case just go ahead and trying scaling it or moving it to a different location or what have you. Alright, I also want to modify a few values here. I'm going to zoom on in on Max's face to the 100% view size.

Why not? And I'll go ahead and select his pin, right there. And I'm going to change the smoothing value on him to zero. And I'm going to leave the artifacts impression at 30%. Then I'll click on my pin, right there, and I'll change the smoothing value to 15, this time around. And these are just values that I decided looked good. You can go your own way, of course. I'll click on this guy, the one on James', well, it appears to us, left eye, but it's his right. And then actually I'll leave his smoothing value set to 10%, so everything's fine for him.

And then I'll click on this central one around his eyes. And I'll leave my smoothing value 10%, but I'm going to change the artifact suppression value to 15%. So again, this is all trial and error stuff, but these are the values I came up with. Now, notice these little blobs right here. They each represent the shape of a blur in a specific region of an image. So, for example, this one right here, as you can see, highlights the region around James's eyes, whereas if I hover over this one, it highlights that next region there.

And if you want to see these guys bigger, then you can click on this little expand icon right there. And then to make them smaller again, you click on the minus sign. And if you're wondering how in the world to read these things, I'm going to go ahead and zoom out by the way by pressing Ctrl+0 or Cmd+0 on the Mac. This one right here is Max's, and so if I go ahead and expand it, this is actually the trail of the camera shake, represented here in white, against the black background. So what I'm going to do so that we can see it even better, I'm going to go up here and click on this little fly up menu icon and choose Save Blur Trace and you can save this file, which I'm going to call, by the way, Max Face and it's 037 px, get rid of that extra character there and the px stands for pixels.

37 comes from this value right there, that camera shake created automatically for me, this blur trace bounce, and I'll show you how that works. And you can either save this as a blur trace file, which is something you can't look at, or you can save it as a png file which you can look at. And so that's what I'm going to do, save it as a png file. And I've already created it in this folder, just so that you know, and I'll click this save button. And now, just so that we can see the difference, I'm going to crank this guy up to its maximum of 199 pixels, which will make this region bigger as you can see here, and make a mess out of it as well.

So we can see what the real difference is. And now I'll click on that fly out menu icon, choose Save Blur Trace, and this guy, I'll just go ahead and call Max face 199px, because that's the new value, and click on the Save button. And then I'll go ahead and reduce the size of this again, cause it's too darn big. So I'm going to reset this to 37 pixels because otherwise, note, I won't be able to scale it inward because I've got this big old value here. So I'm going to reduce that value to what it was, whatever it means. 37 pixels, I'll show you what it means in a second.

And I'll reduce the size of this marquee once again so it's tighter around Max's face, which I found worked a lot better. Alright, now I'm going to click Okay in order to accept that modification. And now I want you to see what those motion trails look like in a little better detail. So I'll press Ctrl+O, or Cmd+O on the Mac, and navigate to my camera shake folder, and I'll go ahead and select both of these guys and click on the Open button. And this is the larger of the two, I'm going to zoom in. And this is the smaller of the two right there.

So you can see, in this case, it really changed the shape of the blur quite a bit. But this is what's meant by 37 pixels, this little image right here is 37 pixels wide by 37 pixels tall, whereas if you switch over to the 199 pixel one, it's much bigger. It's 199 by 199 pixels, it also has a very different camera shaped trail, right here. Again, represented in white. So I just want you to have a sense for what's going on. In any case I've managed to accomplish this.