Developing multiple octopuses at a time 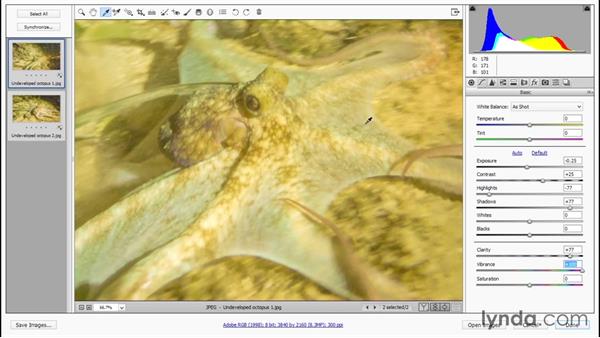 - In this movie, we're gonna develop both of these octopi inside Camera Raw and we're gonna do so simultaneously. So in other words, we're gonna use the same settings for both images which makes perfect sense because after all, I captured these images under the same lighting conditions on the very same evening, although I'm not exactly positive that these are the same octopus. In any event, what I'm gonna do is switch over to Bridge by going up to the file menu and choosing Browse in Bridge or you can press the keyboard shortcut of ctrl + alt + o or cmd + option + o on the Mac, then make sure that you're looking at the contents of the 06_nightlife folder and scroll down to the very bottom of the list to find these two images right here, undeveloped octopus 1 and undeveloped octopus 2.

Go ahead and click on one, shift click on the other and then right click on either image and choose Open in Camera Raw or you can just press ctrl + r here on the PC or cmd + r on the Mac and that'll open both of the images as you're seeing here. Now, you want to go ahead and click on the select all button or you can just press control A on the PC or command A on the Mac, but it's very important if you want to be able to modify both images at the same time. Now, of course the first thing that we need to do is correct the lens distortion so I'll go ahead and click on the lens corrections icon up here at the top of the list and I'll turn on Enable Lens Profile Corrections here under the Profile tab.

So, now I'll just go ahead and enter 50 once again and press the tab key in order to accept that change and we should've managed to change the other octopus as well. Now, the better way to switch between images when you have multiple images selected, is to press the alt key, or the option key on the Mac, and then click on a thumbnail, like so, and notice that its distortion value is also set to 50. Now, I'll go ahead and click on the Color tab and turn on Remove Chromatic Aberration which is just a good idea so we get rid of any misalignment of colors around the perimeter of the photograph.

Alright, now I'm gonna go ahead and zoom in on this particular image here by pressing control plus or command plus on the Mac several times and now I'm gonna switch back to the basic panel and let's modify some exposure values here. I'll take the actual exposure value down to -0.25 and then I came up with a contrast value of 25, like so, and I'm also gonna crank the clarity value up to 77 so we can get some crispier edges.

Now, I'm gonna reduce the highlights value to -77 and I'll take the shadows value up to positive 77 and the only reason I'm using 77 all the time is it just happens to work really well and it's very easy to enter a couple of sevens in a row. Alright, now I'm gonna crank the vibrance value up all the way to 100 so that we can see the colors, which are at this point are pretty off. What we need to do, of course, is modify the color balance by going up to the white balance tool, three tools in, up here in the horizontal tool bar at the top of the screen and then click in some grayish portion of the octopus, such as this detail right there and that is going to re-balance the colors.

Now my click point worked actually really well. I'm just gonna slightly modify these values by taking the temperature value down to -14 and the tent value up to +18. Now, I'm gonna switch back to that other image again by alt or option clicking on its thumbnail, very important so you don't deselect the other image and I'm gonna go ahead and zoom in on the mantle of the octopus and what's interesting about these creatures, this area right there is the head. Now notice if I zoom even farther in, that we have a little bit of a blue edge right there and it becomes even more evident if I start cranking up the saturation value.

And what we need to do to quell it just a little bit so we don't have this super sharp blue edge against this dark grayish shadow is take the vibrance value down ever so slightly so I'm gonna take it down to +90 and that's gonna do a better job because after all, vibrance is an equal opportunity re-saturation tool so in other words, it's gonna have the biggest effect on the low saturation pixels inside the image which means that you can potentially have problems around edge details.

Alright, now I'm gonna tap down to the saturation value and take it up to 80 in order to compensate for the fact that we took the vibrance value down. Now we need to modify the whites and blacks so I'm gonna press ctrl + 0 or cmd + 0 on the Mac to zoom out and then I'll press the alt key, or the option key on the Mac, and drag the white slider triangle until I start to see some clipping, there inside the preview and then I'll back it off to +33, happens to work pretty nicely. And now, alt drag or option drag the blacks triangle, right here until I see clipping and then I'll back it off to -50, works pretty darn well.

Alright, now of course, we need to adjust the details settings so I'm gonna alt click or option click on the thumbnail for the first octopus and I'm gonna go ahead and control space bar, click on him in order to zoom in and you can see that we've got a lot of noise so I'll go ahead and click on the detail icon and crank the amount value all the way up to 150, a radius of one is just fine, but obviously we want to take that detail value down to zero. Then, drop down to the noise reduction options and take the luminance value up to 80, then go ahead and drop down to the color setting and let's go ahead and switch to that other octopus for a moment by alt clicking or option clicking on its thumbnail and I want to see those weird color edges once again.

Notice how very bad they are right now. To smooth things out, I'm gonna increase the color value to it's absolute maximum of 100. I'm gonna take the color detail value down to zero so that Camera Raw isn't trying to preserve color details inside the image. In other words, if you combine a color value of 100 with a color detail value of zero, you're gonna smooth out the colors to the highest degree possible, especially if you also add a color smoothness value of 100 as well and notice now, we're getting some pretty smooth color transitions.

Now then, I want to go ahead and open both of these images as smart objects so I'll press the shift key in order to change the open images button to an open objects button and I'll click on it in order to open those images inside Photoshop. And you can see at this point, that this guy right here, he's in pretty good shape because I was able to frame him properly. But this first octopus, which I think is the more compelling one, is way too small. I want to sharpen the images as well and that's exactly what we're going to do in the very next movie.