Detailing the compact with highlights and shadows 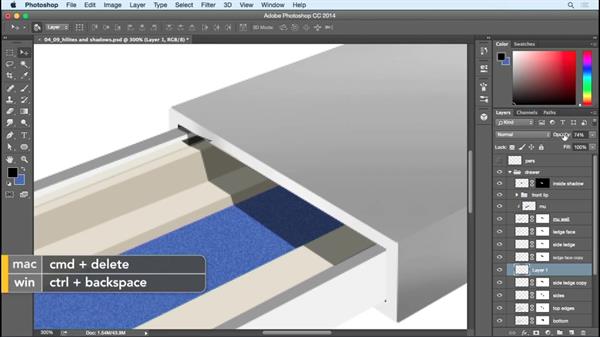 Join Bert Monroy for an in-depth discussion in this video Detailing the compact with highlights and shadows, part of Creating Commercial Illustrations.

Then across, following the angle here, and we can adjust these afterwards. There and across, and we're going to come over and across and here we can just kind of bring this guy over a little more and up and over and close 'em. There, that's going to be our basic shadow look. Now, I'm going to go in there and modify this, just so we have it right. I'm going to make sure all our angles are following the way they should.

So we get our direct select tool. So I can go in there, and I'm going to nudge these with the cursor keys, just so that they're nice and easily done. Let's just move this guy. That's a good curve. That's good. Let's give this guy a slight curve. There we go. And that's going, that's going down, that's good. Everything's good. All right, so now I'm going to go in there and right on top here and call it inside shadow. I'm going to fill it with black.

I have something selected, so it's going to mask it inside there. See, just like that. So we created this nice little effect right in there. Now, for this guy in here, he needs a little shadow of his own. So what I'm going to do, and that is that inside lip, I'm going to go in here to select straight across, right in there like that, and create its own little shadow. So who is that guy? This guy is right here. There's a side ledge copy.

So, right on top of him I'll fill that with black and bring the opacity down considerably for that one, because that's really just a reflection of the shadow in there, and I can erase parts I don't want, like right in here. So when we pull back, we see that now we have this nice little shadow inside, that's from here. Now, we're going to add some shading to this right here. We'll go in there with our dodge and burn tools, and I'm going to get my burn tool, and we'll add a little kind of a shadow right along this edge.

Now we can actually do that even easier by just taking the makeup and giving it a Drop Shadow and have the light coming. Let's make sure there's no other layer styles. So we have the light coming from this direction, and we give it a little distance. See, look at that. There's that little highlight. Let's go in there, and let's make this about 4, and we'll bring this to about a 3. So we've got this little dark edge, right along that edge, right in there, see it? There it is. We can make it really strong. There it is, but we don't want it that strong.

And we can see where it's all starting to fall into place. We picked this guy right up here, and we'll give it a little shadow, right in there, because it's underneath there and underneath there. So let's just get that, and we could possibly give it another little shadow right through there, and you're starting to see how this is coming to life. Now, in the next and final movie, what we'll do is actually put this in position somewhere. Right now it's just floating in space. So in the next movie, what we'll do is actually give it a shadow on the base, so this thing will really look like it's sitting in a place.

4/24/2015
Today, more products are advertised and sold using illustrations than photographs. In this course, master illustrator Bert Monroy walks though the process of creating these realistic images with Photoshop. Bert develops four different illustrations: a home magazine cover, a mechanical unit, a nail polish bottle, and an eye shadow compact. In his trademark style, he explains what he's doing as he does it, so you too can learn how to achieve the featured effects.
Topics include:

Video: Detailing the compact with highlights and shadows