Creating your own action 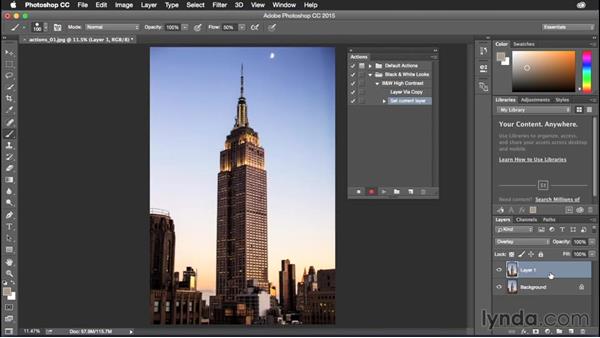 Join Justin Seeley for an in-depth discussion in this video Creating your own action, part of Photoshop: Shortcuts.

- Now it's time for us to start building our own action. I mentioned earlier that you may have had your own recipe for building black and white photos. That's something that I really do like to do, and it's something that I do have actions for in my real world workflow. So let me show you how I would go about doing this. The first thing you have to do is you have to have the Actions panel open. Then what I would suggest you do is create a new action set based on whatever it is you're going to be doing. So in this case I would create a new action set called Black and White Looks.

So these are all different looks that I might want to use with black and white adjustment layers. So we'll hit okay. And that creates a new set. Nothing is happening yet, you've just created a set, basically a folder for these things to sit in. Now we're going to create the new action. What I'm going to do here is I'm going to call this B&W, and we're going to call this High Contrast. And so we're going to make sure it's in the Black and White Looks set. We don't have to assign a function key to it but you could if you wanted to make sure it's accessible through keyboard shortcuts.

You can also assign a color to it. I'm going to assign red to mine, we'll talk about what that means in just a second. And then we're going to hit Record. This is where people tend to get nervous, because they hear the word record, and they think movie recording, sound recording, it's time-based, oh no, Photoshop's keeping track of everything that I do, and I'm being timed. No, you're not. You're not being timed at all. Photoshop is tracking what you're doing, but not how long it takes you to do it. So in this case, here's what we're going to do. We're going to duplicate the background layer here, command or control J. So that's going to do that, it's going to say Layer Via Copy.

Cool. Once we have that done, we are going to then change the blend mode of this layer. We're going to do that and change it to overlay, and that's going to make it sort of a higher contrast look, then I'm going to add a black and white adjustment layer. Inside of the black and white adjustment layer I'm going to do something like the green filter, which is usually one that I apply. And then we're going to close that up. I'm then going to create a comp on top of it all, so I'm going to hold down shift, option key on the mac, alt key on the PC, command or control, and the letter E.

That creates a brand new comp layer, we learned that earlier in the course. And then we're going to run a filter on that. Filter, Lens Correction. Go to the Custom tab, add a vignette of -45, let's say. There we go. And now we hit Okay. So we've hit Okay to that. Everything is done, that's the look that I want. So I'll hit stop. So all of that has been recorded, and we did quite a bit, you can see there's 1, 2, 3, 4, 5, 6 steps in here.

Now let's go to the file menu here and choose Revert. That's going to revert my document back to its original state. So there's the original photo we had before. We've got the black and white high contrast look inside of our Black and White Looks in the actions panel. I'm going to select B&W High Contrast, and then click the play button. It goes through and it plays the action back on my photo giving me exactly the same result as I had before. And it would give me this result on any photo I opened in Photoshop from here on out, making it super easy for me to do instant looks that I like to do on my photos without having to worry about the settings.

I figure out the settings one time, I record them, makes it easy for me just to hit play the next time I need to use them. So that's how you can record your own basic action here inside of Photoshop.

9/16/2015
Photoshop fanatic? Get 35+ great shortcuts that will make you even more productive. Justin Seeley takes his top 25 favorites and adds 14 tips and tricks, broken down into categories such as type, brushes and tools, and automation. Learn how to make Photoshop run lightning fast, switch colors while masking, apply blend modes and fills straight from the keyboard, reset type quickly, change brushes on the fly, use actions to speed up your workflow, and much more.

Video: Creating your own action