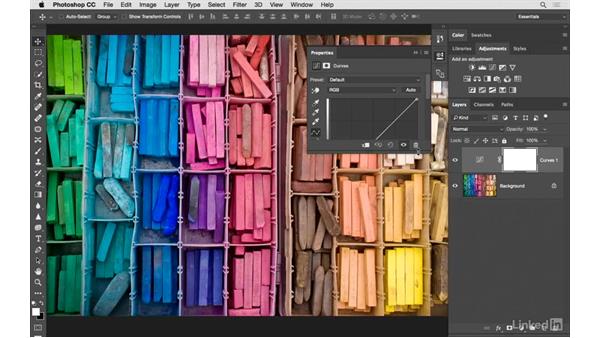 Join Chris Orwig for an in-depth discussion in this video Creating vivid color with adjustment layers, part of Photoshop for Photographers: Creative Color.

- [Voiceover] After the complexity and difficulty of the last chapter, I think you'll find this one to be fun and a breath of fresh air. Well let's explore how we can use adjustment layers in order to create more vivid and vibrant colors, then in the next movie we'll apply what we learned to working on another photograph. Here though we'll start with this picture that I captured of this artist chalk tray and I just love all of these colors. And let's say that we want to bring out even more color. Well one method that we use is to use an adjustment layer which is called vibrance.

Vibrance gives us two sets of controls, one is for vibrance, another one is for saturation. Now what's interesting is that these controls, they're related yet at the same time different. Let me just review how these work and to do that I'm going to zoom in on the image for a moment. When we zoom in on this and we adjust the vibrance I want to point out a few things. I'm gonna bring this all the way up to 100. You'll notice that when the vibrance goes to 100 what's happening is it's helping some of the colors that are a little bit weaker, it's bringing in some more color into those areas.

The colors which are more saturated, say like these greens over here, it isn't touching those at all. This adjustment works in a non linear way. It favors the weaker colors. As I drag this to the left, you can see that those colors which are weaker it's now pulling more color out there and it's not affecting these colors as much. So this is the slider to use when you want to increase color variety but really you want to be careful not to overdo it. I should also point out that if we bring this forward let me just zoom in really close here.

Look at the back of the blue chalk tray. When this is at zero you can see, well it looks pretty gray but it's finding some blues in there and it's just bringing them out. In contrast, when we use saturation which is more of a linear adjustment, it just says take whatever color is there and make it more. It's not really discovering new colors in this tray you can see it's just saying, "Hey, I'm either gonna add or remove color" and it's a very linear, straightforward type of an adjustment. The vibrance on the other hand in a way maybe it's a little bit more intelligent and it can be useful in certain situations, they both can be useful depending on what you want to achieve.

So the photograph like this what we might do is increase that color variety. We can crank up the vibrance without being too worried of overdoing the color and having it block up. Saturation you have to be more careful. There's no detail here at all. That wouldn't print or reproduce very well. So here I'll bring that up just a little bit so it's gonna be a combo of vibrance and saturation together which are going to bring out more of the colors in the image Well that's vibrance and saturation. Let me trash that layer and let's talk about another adjustment layer and that is curves.

So contrast and color are really closely related. Another thing that's related is brightness. If I darken an image, you can see colors have more density. They're appearing darker and richer and you can see how we can really bring out some of those colors. As I brighten things up, they become a little bit whiter and more washed out. Now it depends on where we affect this, but if we go to our point down here and say, "Well, let's brighten up all those shadows and brighten up the rest of the image," well then we end up with a much lighter and brighter color pallet.

If we do the opposite, you can imagine how we can deepen or darken those colors. Now how does this relate to what we're doing in regards to bringing out vivid or vibrant color. Well, a very common adjustment is to add contrast. There's a preset that you can go here and in this preset it's called Increase Contrast and what is does is basically creates an S curve. An S curve is very traditional, old-school way of adding contrast and what you can see is it brightens up the top and darkens the bottom.

Now you can also just create this yourself just go ahead and click up here in brighter region of the image to brighten it up and then click down here to darken it. This is a pretty subtle S curve, you can see the shape of the S right there. Of course you can exaggerate it but the image wouldn't look very good. So there we have our S curve. Well when we have that S curve, it increases contrast, brings out more color saturation and you obviously want to be careful on how far you go with this but sometimes it can just, it can be money and really add kind of that snap to the photograph that you need.

Now can we use this adjustment in combination with others? Yeah, by all means. We can add a vibrance adjustment here and add a little more color variation, maybe even a little bit more saturation. And now all of a sudden, we have these colors which are just they feel alive. Take a look at this, it's not that different from the beginning but at the same time, it really is. And so we can use different methods like these in order to bring out more colors in our photographs.

7/22/2016
Working with color can be an amazing journey, and Photoshop is a great vehicle for taking the trip. In this course, photographer and educator Chris Orwig teaches a variety of ways to create captivating color in photographs. Chris goes beyond the basics by showing how color can profoundly affect a photograph's impact. He demonstrates adjusting color and tone to make images more vivid, changing clothing and background colors with Photoshop and Camera Raw, working with color saturation, cross-processing, removing color, and more. The course includes real-world challenges that showcase the techniques Chris has shown for creating intriguing and beautiful color photographs.
Topics include: