Creating text along a path 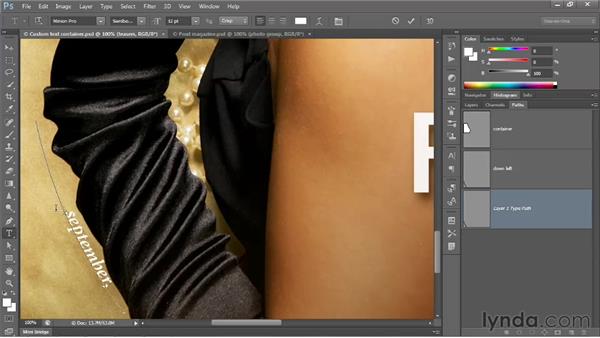 In this movie I'll show you how to create text along a path, and this could be any path outline, a circle or any other shape you can draw inside Photoshop. For our part, we're going to creating text along a slightly arcing line. We're looking at the final version of the composition, and I'm zoomed into the lower left corner along the model's glove, and you can see the words are arcing ever so slightly. That is the baseline is arcing. So let's see how that works. I'll go ahead and switch to our composition in progress, and I'll zoom in to that lower left corner of the image, like so, and then I'll switch over to the Paths panel, and you can see that I've got a second path called down left.

Go ahead and click on it to select it. It's a little hard to see here, but it's this arcing line set between two anchor points, and that's it. So it's pretty simple to draw as we'll see when we take a look at the Pen tool in the Advanced course. But for now, we'll just take this path outline for granted. Now before you set about creating text on a path, which is somewhat of a precarious proposition inside of Photoshop, you have to create the text along the path directly. You'll want to go ahead and establish a few baseline formatting attributes. So I've got my Type tool selected, I'll press the Enter key to select the font, and I'll go ahead and type in M-I-N-I, which gets me Minion Pro, which is exactly what I want.

Then I'll tab over to the style, and I'll enter Semi, which gives me Semibold, and then I'll press the down arrow key to switch to Semibold Italic. Even though the name is truncated, that's the style that I've selected, and then I'll tab over to the type size, and I'll change it to 12 points, and then finally, you want to click on the Left align text icon right there in order to make sure that the text aligns to the left, and we want the text to be white, so click on the color swatch and go ahead and drag the circle to the upper left corner of the field, and then click OK. All right. Those are our formatting attributes.

Now let's create the text, and you do so by clicking with the Type tool on the Paths Outline. Notice when I hover my cursor, it changes to an I-beam with a little dotted line going through it. And so whether we're working with the closed path outline or an open path like this one, the closed path would be a circle. That is it has no end points, it's continuous, whereas an open path has end points. It begins at one location and ends at another. Anytime you hover over a path outline with the Type tool, you'll see this cursor, and what you want to do is click and enter the text. Well we want our text to start up here, and then go down, but it's anyone's guess what direction this path outline actually goes in.

Photoshop knows the direction. But if we've got the direction wrong, it can mess things up. So rather than clicking at an end point, you're better off clicking some place sort of in the middle of the path outline just to hedge your bets. So I'm going to click right about there, and you can see we've got a blinking insertion marker and everything looks to be good because the tallest portion of the insertion marker is on the top of the path, which is what we want. That indicates the X height and the descender. And the smaller portion of the insertion markers along the bottom, that indicates the descenders. All right.

Then go ahead and type in the words, September 2026, like so, and you can see that 2026 just fell off the edge. If I press the Backspace key a couple of times, in my case, I happen to have room for 20. But as soon as I try to enter 26, the text falls off, which is great, because I want to show you how to modify the placement here, and there's a couple ways to do it. One is to use the Arrow tool, which is the more surefire method. The other way is to press and hold the Ctrl key, or the Command key on the Mac, but that only works, by the way, as long as you're in the process of actually creating the text object.

Later when you're editing it, this technique fails. But anyway, if you press the Ctrl key, or the Command key on the Mac, and hover over that X right there, you'll see your cursor changes to an I-beam with an arrow head. Then you can go ahead and drag the text upward along the path, like so, in order to move it to a different location. Or if that fails you just go ahead and press the Enter key on the numerical keypad in order to accept your new text object, and then switch to the Arrow tool, and it doesn't matter which one it is. It could be the Direct Selection tool, it could be the Path Selection tool, either one, and then hover your cursor over the path outline, and you'll see that I-beam with the arrow head, and you can go ahead and drag the front of that text, the X, which indicates the point of alignment there to whatever location you like.

Right about here is probably going to serve our purposes for now. One thing to bear in mind, however is you want to drag along the path. If you drag to the other side, you'll flip the text, like so, and that's not what we want. So I'll go ahead and drag back to the right side to flip it where it needs to be. All right. Now I'm going to press the T key to switch back to the Type tool, and I'm going to click inside the text in order to set the blinking insertion marker, and then I'll press Ctrl+A, or Command+A on the Mac, to select all the type, press Ctrl+H, or Command+H on the Mac, so I can see what I'm doing without the highlight there, and I'll press Ctrl+T or Command+T on the Mac, to bring up the Character panel.

I want this text to be all caps, and you might ask me, well if you wanted it all caps, why didn't you press the Caps Lock key and just enter the text that way? Because if you do that, you limit your flexibility, whereas if you apply it as a formatting attribute, you can always change your mind later. So notice that you've got that little icon there that says All Caps. You also have the keyboard shortcut, as long as the text is selected, of Ctrl+Shift+K, or Command+Shift+K on the Mac. I'll go ahead and click on that icon in order to set my text in all caps, like so, and then I'll go ahead and hide the Character panel, and finally, I'll press the Enter key on the numerical keypad in order to accept my changes.

Once again, notice here in the Paths panel that we have a new temporary path, we'll only see it as long as this specific layer is selected. And somehow I've ended up with a work path. If you do as well, you can tidy things up by just dragging that thing to the trash can. That may make you worry because our path outline just disappeared. However, if you click on that temporary item once again, it comes back, and sure enough, that is the text object that we just created. All right. I'll press Escape this time since I just highlighted the text. So that's how you create text along the path inside Photoshop.

In the next movie, I'll show you how to adjust the vertical alignment of the text along that path using baseline shift.

Video: Creating text along a path