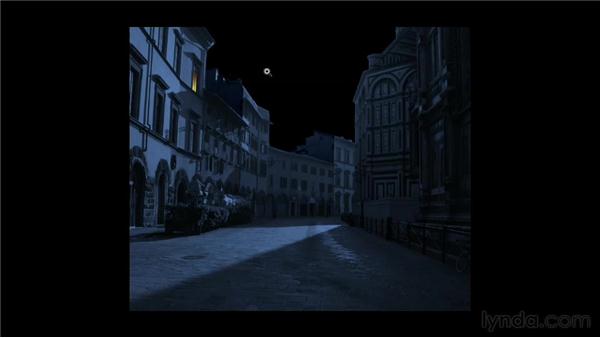 Join Bert Monroy for an in-depth discussion in this video Creating the sky, part of Creating Dreamscapes in Photoshop: 1.

In this movie we are going to take that black sky and give it some life, especially the moon that's casting these wonderful moon glows all over the street. To do that I am going to use two files that I have. One is this file of clouds. Now they are not very fancy clouds. It's just some clouds that I shot. I walked down the street and just see interesting things, and I take a picture. And clouds, I am always fascinated by clouds. So I just took these clouds. Nothing fancy, it doesn't matter. It's their shape that's important here. Then I went on the web, and I did a search for full moon, and I came up with this file here.

I made sure that it was file that was royalty free so that I could use it without anybody getting upset. And those two files right there are going to make up our night sky. First thing I'll do is I'm going to take our clouds right here and they are going to be put right in the scene right there. So let's get those clouds, and I'm going to take my Move tool and simply drag them into that scene right there. Now they are very large. I have not modified any of these images ahead of time just so you can see what happens in situations like this where the files don't quite match.

I need to resize those clouds to fit into that area. So I'm going to hit the F key, which is going to bring me to full-screen with the menus, and then I'm going to shrink it down a little bit so I can kind of see the whole scene there, and then I'm going to hit Command+T, which is going to bring up all the little controls for the actual dimensions of that file. I'm going to hold on my Shift key to constrain, and I'm going to shrink it down a bit right to that edge of the wall right there, and let's bring it over just a little and grab this side. Hold down that Shift key and drag it over just so I can go in there and start to get that size just the way I want it.

I'm going to put into position right up there where I want it, right up in that area there. Now it's a little larger than natural. This is not a fantasy, this is just a story that we are doing here. So I need to resize my moon. So I'm going to hit Command+T to bring up the transform tools and holding on my Shift key to constrain I'm going to make the moon much smaller up into that area right there and put it in position right where I want it, right about there, hit Enter so it falls in to place. There is my moon, which I'm now going to go in and start giving it some life.

In my background here, which is right now set to black and white. I'm going to reverse these two so that black is in the background and for the foreground I'm going to pick a blue right from my scene down here. I'm going to pick a nice bright blue like this one right here. Nice bright blue. That might be a little too strong. So I'm going to just bring it down just a little like that, click OK, but it's in the same family. So I got that blue and with my gradient tool, set to Radial gradient, I'm going to go right at center the moon and click and drag out like this, which is going to go to give me this nice kind of a glow, and I might want to make it a little bigger so I might just pull it out a little further. So I got a little bit more of a glow.

So now we got our moon, and we need our clouds back. So I'm going to click on the clouds, right there. Now they've completely hidden everything, but I have these light tones and what I want is I want those light tones that make up the clouds themselves to come through. So I'm going to go to the clouds layer, right there, and set the mode of those clouds to Screen so that now the moon shines through, and you get the nice blue glow from the sky behind, and now we are seeing that our sky is starting to look more like the night sky that we want. Now this area down here, we might want to darken that just a little bit, and that is in the clouds.

9/18/2012
Discover how to use Adobe Photoshop, without any added fine art skills, to modify artwork and turn the ordinary into extraordinary. Author and illustrator Bert Monroy takes an unexciting photo and transforms it into an amazing dream sequence by combining it with other photos and techniques. His process touches on compositing, digital painting, masking, and other key image editing techniques. All you need is Photoshop, some images that could use a boost, and your imagination!
Topics include: