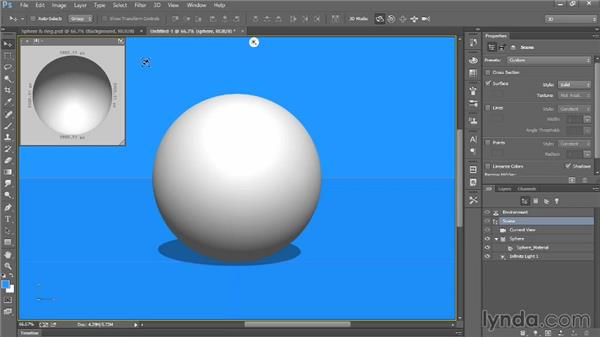 Join Deke McClelland for an in-depth discussion in this video Creating a simple 3D object, part of Introducing Photoshop: 3D.

In this movie, we're going to create a very basic 3D scene that involves the sphere that you see at the center of this artwork. And we're going to do so entirely from scratch. So don't worry if your results and mine differ a little. So I'll start by going up to the File menu and choosing the New Cmd. And I'm going to make my image 1,500 pixels wide by 1,000 pixels tall. That may seem incredibly tiny, but when you're working with 3-D inside of Photoshop, you want to start small.

Because you can always up sample your images later. And that way, everything works as quickly as possible. Note that my resolution is 300 pixels per inch, that doesn't really matter so much. My color mode is RGB, which is important, and I'm working 8-bits per channel, my background contents are white. Now I'll click OK in order to create that new image. Now, I really want the background to be blue. So, I'll go up to the Window menu and choose Color to bring up my color panel right here.

And notice that I'm working with the HSB sliders, which is the easiest way to mix colors, in my opinion. And I'm going to change the hue value here to 210 degrees. And then, I'll tap to the saturation value and raise it to 100%. And, I'll tap to the brightness value and take it to 100% as well. Now, I'll hide the color panel. I want to turn my entire background image blue. Blue's my foreground color. I'll use that standard keyboard shortcut, which I'm hoping most of you know, which is Alt + Backspace, here on the PC, or Option + Delete on the Mac.

And we end up with this layer of blue. Now let's say I want to add a 3D sphere. Well, I could go up to the Window Menu and choose the 3D Cmd. In order to switch to the 3D panel right here. Then I'd select the third radio button down, Mesh from Preset, go ahead and change it from Cone, which is the default setting, to Sphere. And then drop down to the Create button and click on it. The problem with working that way is, it takes your blue background, and it wraps it around the sphere and sets it against transparency.

Which is not what I want, so I'll go ahead and press Ctrl + Z, or Cmd + Z on the Mac, to undo that change and switch back to the Layers Panel. So if you want to create your object, such as the sphere, on an independent layer, you have to make that layer in advance. And so I'm going to drop down to the little Page icon at the bottom of the Layers panel, and Alt + Click on it, or Option + Click on a Mac, to force the display of the New Layer dialogue box. Let's go ahead and call this layer Sphere, and then I'll click OK. And notice that it's entirely filled with the checkerboard patter, so its entirely transparent at this point.

Now, I'll return to the 3D panel, Mesh From Preset is still selected as is Sphere. So I'll just go ahead and click on the Create button to make a new white Sphere, against that blue background. Now, notice that Photoshop automatically switches me to the Move tool here at the top of the Toolbox. And that's because the Move tool is your primary means for modifying 3D scenes. In the program and now there's one of two ways to work. You can hover over this sphere itself, and that will appear inside of a 3D bounding box.

And then if you click on it you're going to actually select that Sphere, and we'll take a look at how that works in a future movie. But for now, I want to focus on repositioning the camera. And the best way to reposition the camera, that is your view of the scene, which is going to move everything around including the object and a shadow, and a light and so forth, is to click on Current View here inside the 3D panel. So right below the word scene, you will see Current View, and then if you drag around inside of the image window, you will actually rotate the entire scene in 3D space.

Now this can be a little bit difficult to get used to if you've never worked with a 3D application before, which is why we're going to spend a lot of time navigating in 3D space throughout this course. And notice you have a few other 3D tools at your disposal, so these are all variations on the Move tool. And by default the Rotate tool is selected, and this is the tool that gives you the most free form control. So you can just drag things around anyway you like.

But we have some other tools at our disposal as well which we'll explore in future movies. Now let's say that you want to modify the lighting of this sphere just a little bit. Well you can drop down to this single light. Which is provided for you by default. Which is called infinite light one. And the idea behind infinite light. Is that it's infinitely far away. So you can't change it's placement, but you can change it's angle. And to clearly understand what that means, think of the sun.

You can't reach out and grab the sun and move it to a new location it's just too darn far away. But you can change if you have control over things, you could change the angle of the earth with respect to the sun. And here inside Photoshop, we pull off this very powerful effect by dragging inside this little lever right here. And so now you can drag, not only the light, which is represented by this little icon, that tells you that the light is outside of the canvass.

So it's outside of the visible portion of the art work. But you not only move it, but you also move the shadow around, as we're seeing down here. I also have some properties that I can control that are associated with this light. So for example, I could increase the intensity of this light if I wanted to, to say 120%. And then, I could soften my shadows as well. So, instead of having a hard shadow, as I do here, I could enter, say, 30%, in order to give the shadow just a little bit of softness.

And then, if you want to hide the light from view, just go ahead and click on Current View, or scene. Either one of them is fine for our purposes. And that friends, is how you go about creating a very simple 3D object. Complete with lighting and shading, here inside Photoshop.

6/11/2014
When it comes to Photoshop, 3D doesn't require a special pair of glasses, NURBS curves, or subdivision surfaces. In fact, Deke shows how, using the Photoshop skills you have now, you can quickly create 3D objects that look like the real thing, complete with volume, shading, and perspective. This introduction guides you through 3D in Photoshop in the shortest time possible. Deke shows you how to model forms, wrap them with color and surface textures, hang lights in your scene, and add cameras—the windows into your 3D world. Plus, learn how to create 3D type and extrude path outlines so they have the appearance of depth. Get started now on a series of eye-popping 3D projects that will help you get to know Photoshop in a whole new way.