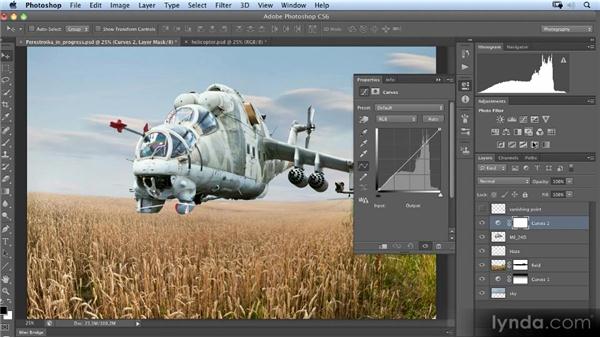 Join Uli Staiger for an in-depth discussion in this video Creating a shadow, part of Digital Painting in Photoshop: Perestroika.

Maybe we have to change the position a little bit later, when we put in the sickle bar. But for the moment, that's an okay position for the helicopter. What we don't need anymore are these vanishing lines for painting in the vanishing points. So, you can either just delete or just make it invisible, which is probably okay. If you do so, just call it vanishing point because I think it's always important to name the layers. Okay, so the position is alright but the lighting is not. Looking at the helicopter, you can see that it was photographed not with direct sunlight.

Of course, it's a little bit brighter on this side than on that side, and that means that the sun was right here up in the sky but we had a cloudy sky. And this is important because if you take pictures of an object, of this helicopter, for instance, which is lit by direct sunlight. Then you have very little possibilities to change the direction of the lighting. Now, we have a lot of possibilities to do so because we can just paint on the shadows on this helicopter. There's no sharp shadow, no focused light, no focused shadow, so it's easy to paint in our own shadow.

In this image, I want to see the sun right here. Just look at the clouds here and you can see that the sun must be somewhere on the right side of the image. Of course, that means that the shadow has to go on the left side. It's a little bit brighter here on the left side than on the right side, but that's not really important. First thing we have to do, we have to construct something that looks like a shadow. And for this reason, you can take either the levels, or the curves. Either one of them does the same thing, I'll show you both.

I'll start with the curves, and I go to the helicopter, which is called MIL24D. The name for it in the Western military world was Hind. (LAUGH) And it looks a little bit like a hind. So, this is why this is called, the NATO name is Hind. Okay, so we go to the curves. And in order to construct a shadow, you might try this. You might try this, just lower this down while you can see it gets darker. But you can also see the contrast increases a lot. And the darker it gets, the more contrasty everything gets. So this is not the way to construct a shadow.

I've moved this hold again because we don't want this. If you want to build a shadow with the curves, you have to lower down this point here. And now you see it gets darker and darker, darker, darker, darker. But the contrast does not increase. The darkest shadow would be this, (LAUGH) but this is a little bit too much. So we just stay somewhere around here. Something around 120 should do it. Okay, that's what we can do with the curves.

But I said I show you the other way, too. The other way you use the levels, not the curves. And using the levels, it's even I think a little bit easier. You have, first of all, also the possibility to get it darker. Like this. But also to increase the shadows. Even if you use this middle panel, you see that the shadow increases. Well, that is not what we wanted. We go back to one.

You take this. You lower the lights, just like that. And go also to something like 110, 120. We have a correction layer so we can always adjust this 126 if we want. We can get it darker, we can get it brighter. Whatever we want. One thing is really important, because we don't want to build a shadow for the whole area, we just want to build it for the helicopter. So, of course, we need a Clipping Mask, which is created right here. And now, you can see that only the helicopter is in a shadow area. Of course, we don't want the whole helicopter being in a shadow area, so I just take the layer mask.

And go to Image Adjustments, and go to Invert. So now everything is gone again, we don't see anything. And in the next step, we can paint in the shadow. 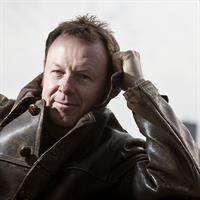 9/19/2012
In this workshop master Adobe Photoshop artist Uli Staiger takes you step by step through the process of creating the fanciful image of an old Soviet helicopter being used as a harvester. Learn how to combine supplied source images, make adjustments, and add details to create a complex, realistic scene with lots of layers. Along the way discover lots of tricks and techniques for painting with light and shadow, creating motion blur, brush-based masking, adding vignettes, and more.
Topics include: