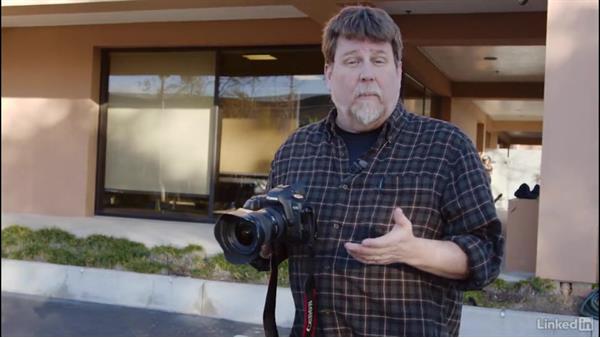 See a live demo and with detailed explinations about how to shoot skateboarders for a sports action composite in photoshop.

- So I'm thinking that for the position of photographing these guys, I'm going to be shooting this way against the building. Because if I'm shooting this way, it's a lot more complicated background. It's a lot more cluttered with the trees and it's not going to provide a good visual seperation between the skaters and the background. Whereas if I'm shooting against the side of the building here with the light that's on it, it is going to provide much better visual seperation. So my idea is with this wide angel lens, I can get down low and shoot up as they're kind of passing by me.

So that's the thought. I'm going to do a few more test shots here, check out my ISO and my shutter speed, how close I need to be to them in order to get the shot that I have in mind. So you can see I've got the highlights blown out here in the sky. I'm not too concerned about that for these type of shots. I think that for skateboarder shots, it's okay for it to look a little bit edgy and if I try to retain detail in the sky, of course, I would lose the detail on them.

So this is not really a shot about retaining detail in the sky. This is not a landscape shot. And I'll probably end up processing this in such a way to kind of enhance that sort of edgy look there. I'm at 1/1000 of a second. I'm at ISO 500 here shooting f/2.8 wide open there. Now one thing I want to mention here that I didn't mention before is that I'm not shooting with a tripod. So, while it is important that these shots line up, once we get the into Photoshop, I don't necessarily need to shoot them that way.

In some situations you might be able to use a tripod so if the subject is far away and you got a long lens and you're well out of the action area then a tripod might be the way to go. But in this situation I'm kind of like right down in the middle of things and having a tripod would actually probably be more of a hindrance and possibly a safety issue than a help in this case. Plus, I can use a feature in Photoshop to automatically align the layers. So the important thing that I'm trying to keep in mind when I'm doing the shots is that I set it up and when I hear them coming in, I start hammering on the motor drive, the continuance advance, before they even get into the shot.

And I'm not panning with them. You want to have them passing through the shot, not you tracking them. Because if you're tracking them, then the background's not really going to line up that well. So the object here is not to make a panarama but to have them pass through the shot so I can get that sequence. So I'm going to do a shot the other way because the sun is looking kind of interesting behind the trees. Maybe it will create some interesting flare or shadows, some silhouettes. We'll see how it goes.

So in this situation, I'm actually prefocusing on a certain point in the scene. I'm not even trying to focus on them as they're going by. By prefocusing on this point, I know that, okay, they're going to be passing through there. Plus, with a wide-angle lens, even when you're shooting more wide open, wide-angle lens' have a lot more depth of field than you would have on a normal focal length or a telephoto lens. That's interesting but that busy background is just not doing it for me.

So that angle is actually pretty cool, shooting up. So we'll see how that works. So by shooting up, it's giving me a lot more separation because they are more against the sky. So even sometimes when you're at a location that has a lot of problems, sometimes there's ways you can just get in a position where it works a lot better. Yeah, that was nice. So, I think we got it on that last one.

I got several sequences I might be able to work with here. What I'm going to do now is go download the pictures, bring them into Photoshop and start playing around and see what we got.

3/23/2016
Great athletes make great action shots. But an action shot shows just one moment of action—it doesn't show the arc of a golfer's swing or the form of a runner's sprint.

By combining your camera's burst mode with Photoshop, you can create a composite that shows an athlete in action. In this course, photographer and educator Seán Duggan shows how. After mapping out a plan for lighting, composition, and more, he photographs the subjects. Then, the action turns to Photoshop, where he assembles the composite using layer masks and some careful retouching.
Topics include: