Creating a new layer and background 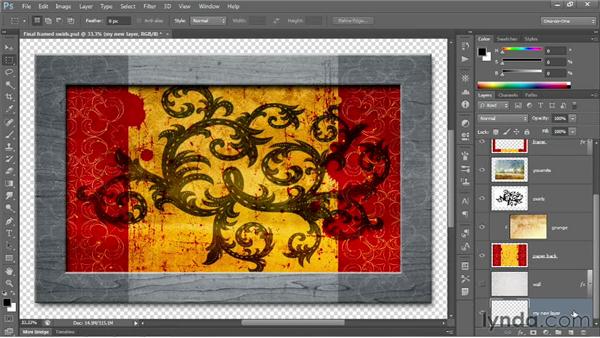 In this movie, I'll show you the various ways to create a blank new layer as well as how to create a new background. For example, here I am looking at the final version of my artwork. But let's say I want to output my image, and instead of the frame appearing against this green wall, I want the background to be page white. Now, if I scroll down my list of layers here and turn off the rearmost layer, which is the wall layer, then I end up seeing this checkerboard and that's Photoshop's way of showing you transparency. In other words, there's nothing there. Now, if I were to print the image at this point it would appear against a white background.

In other words, the checkers don't render to the printer. However, it's impossible to gauge any of the effects that go out into the transparency. For example, this drop shadow behind the frame looks awfully darn light, when in fact it's a very dark shadow. But we're not going to be able to gauge it properly until we add a white background to our composition. So the first thing we need to do is create a new layer. There's a couple ways to do that. One is you can drop down to this little Page icon at the bottom of the Layers panel. Notice it says Create a new layer, just go ahead and click on it, and you'll create a blank new layer in front of the active layer, so right above wall.

All right, and I'm going to press Ctrl+Z or Cmd+Z on the Mac to undo that. What if we want to put the new layer below the wall layer? Then you press the Ctrl key or the Cmd key on the Mac and click on the Page icon. There's two more keyboard tricks you might want to know about. So I'll press Ctrl+Z, Cmd+Z on the Mac to undo that layer. If you want to name the layer as you create it, then you press the Alt key or the Opt key on the Mac, and click on the little Page icon. Then you call the layer anything you want, and click OK. Notice the new layer appears above wall. What if you want to create and name a new layer and put it behind the active layer? Well, go ahead and undo the new layer again.

You press the Ctrl and the Alt keys on the PC or the Cmd and Opt keys on a Mac. Click on the little Page icon, name the layers you like, and click OK and it appears in the background. All right, I'm going to undo that because I want to show you one more way to work, and that is, you can go to the Layers Panel fly-out menu icon up here in the upper right corner of the Panel. And you can choose the New Layer command or you can take advantage of the keyboard shortcut, Ctrl+Shift+N or Cmd+Shift+N on the Mac.

And for my part, that's what I find myself doing most of the time is just using that shortcut, because that brings up the dialog box and allows you to name the new layer. Right, I'll name it. Click OK. Notice, it does in this case, appear above the wall layer, and we really haven't solved our problem so far, because the layer is itself transparent as indicated by this checkerboard thumbnail. Well, now that we have a new layer we can convert it into a background, and you do that by going to the Layer menu, choosing New and choosing Background from Layer and that ends up doing a couple of things.

First of all, it sends the layer to the back a the stack. It makes it a flat image element, so it's no longer a floating layer. It renames the item background and it goes ahead and fills it with the background color, which by default is White. And you can see the foreground color and the background color, down here at the bottom of the Toolbox. And now, notice, when we see the drop shadow rendered against the white background, that it's quite dark indeed. So if I turn that background off for a moment, that's what the shadow looked like before, very light against the transparent checkerboard pattern. And then if I turn the background back on, we have a much darker shadow. And so, I might actually edit that shadow.

I'll go ahead and expand my Layer effects by clicking on that little down arrow icon. I'll double-click on a Drop Shadow effect, and I'm going to take that opacity value down to 50% so we have a more subtle shadow. And then I'll tab my way to the Distance value and then press Shift+Up arrow, a couple of times in a row to take that value up to 45 pixels. And then, tab to the Size value and take it up to 45 pixels as well. And then click OK. So we now have a larger but more translucent shadow. And again, if I were to turn off the Background Layer, the shadow almost disappears.

But with that Background Layer on, I can see what's actually happening inside my composition. And that's how you create new layers as well as a new background here inside Photoshop.