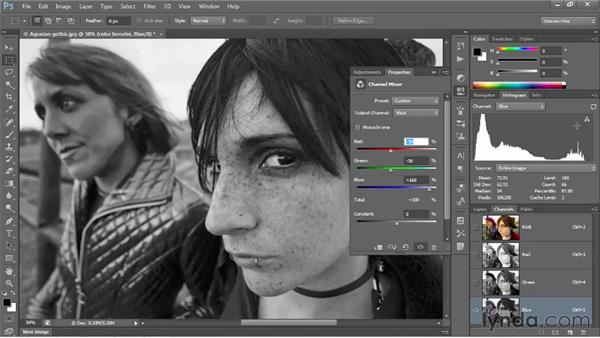 In this movie we'll do just the opposite of what we did in the previous movie. We'll use the Channel Mixer to exaggerate the amount of contrast between channels and the result will be a collection of wildly saturated colors. So starting with the original image once again I'll press the Alt key, or the Option key on the Mac, and click the Black/White icon at the bottom of the panel and choose Channel Mixer, and I'll go ahead and call this guy color booster this time, and then press the Enter key, or the Return key on the Mac, in order to bring up the Properties panel. And I'm going to switch over to the Channels panel and click on the Red channel to make it active, that way we'll see the Red channel here in the Histogram panel.

I'll also make sure Output channel is set to Red. Now the idea this time is we're going to increase the amount of red in the Red channel and the amount of green in the Green channel and the amount of blue in the Blue channel. So I'll take this Red value up to 160%. Then we need to compensate with the other values by making them negative. So I'll change Green to -30%, and I'll change Blue to -30% as well, and the sum is 100%. The question is does that work for the histogram? I'll go ahead and update that histogram, and we can see, no we're missing some shadow detail here.

So I'll take the Constant value down to, let's say, -2, and then I'm going to raise the amount of Red to 161%, and that ends up nicely filling up the black to white spectrum. Now just so you can have a sense of what's going on here, I'll turn off this eyeball at the bottom of the Properties panel, that's the original Red channel, and this is the exaggerated version of that same channel. All right. Now I'm going to going to switch over to the Green channel, and I'm going to switch the Output channel option to Green as well, and I'll do exactly the same thing, that is to say I'll increase the Green value to 160%, I'll take the Red value down to -30%, and I'll take the Blue value down to -30%.

Now in this case I'm not going to worry about confirming the histogram, it does have some problems, but we're going to come back to green in just a moment. And to see what we've done here turn off the eyeball, and then turn it back on. This time around it doesn't look like we're making that significant of a difference. In other words, the contrast isn't really elevating all that much, although we are darkening up the area inside the fur and a few other of the dark details as well. All right now I'm going to switch to the Blue channel, here inside the Channels panel, and I'll change the Output channel to Blue as well.

I'll take it up to 160%, I think you're beginning to get the idea here, and I'll take both the Green channel and the Red channel contribution down to -30%, then I will take a look at the Histogram. If I update it, my shadows are just fine, but my highlights need some work. Notice that we've got a big gap there. So I'm going to increase that Blue value to 167%, and that goes ahead and stretches out that histogram so that we have better highlights, and so you know what's going on here I'll turn off the eye once again.

We've got a much darker Blue channel this time around, and we have a higher degree of contrast between it and the other channels that are involved. All right. Now I'll switch back to the RGB image, and you can see it is a much more saturated image. This is before, and this is after. The problem is I felt like we were introducing a little bit too much yellow, so we have the sort of yellowish orange flavor to the flesh tones, and yellow is a contribution of red and green working together, but I like the red especially the reds that are popping off the fur here.

And so just to give you a sense of what we've accomplished I'll switch back to the RGB image, switch back to the layers panel as well, and this is the original image as it appeared at the outset of every one of these movies, and here's the image now with some amazing saturation levels, including this bright, bright red here inside of the fur and these very bright colors in the background woman's hair as well as the exaggerated colors in her jacket. And the amazing thing about these colors is most of them are going to survive quite nicely in print.

And incidentally, if you ever want to get a sense of how your image is going to commercially reproduce, and this is also somewhat indicative of how it's going to print when you go to a color laser printer. Then go up to the View menu and choose Proof Colors, or you can press Ctrl+Y, or Command+Y on the Mac, and that is, at least according to Photoshop, how the image is going to look in CMYK. If I press Ctrl+Y, or Command+Y again, this is how the image looks in RGB. So not too many differences there, despite the amazing levels of saturation that we now have and without any color clipping or noise details, which are the kinds of things you might encounter when using Photoshop's conventional saturation options.