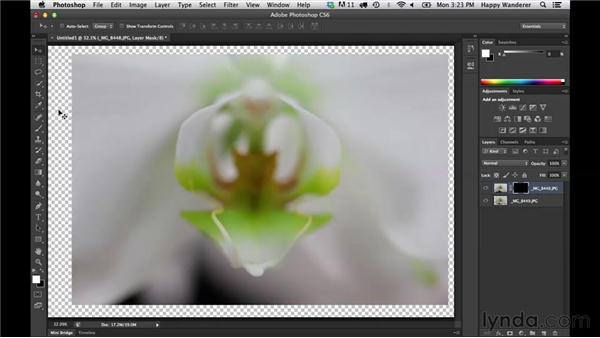 I've got my couple of shots of the orchid, I've already put my card in my computer, and here's what I'm seeing in Adobe Bridge. I was shooting Raw+JPEG, so I've got four files here for my two final images. I am just going to work with the JPEGs right now. If they had blown highlights or something, I would probably work with the raws, but I think this is going to be easier. This technique is going to work with any version of Photoshop that has layers and layer masks, which is most of the versions going back for at least 15 years. So, you ought to be okay. Some steps are going to be easier if you're using a somewhat newer version.

So, here in Bridge, I have selected both of these. I did that by clicking on the first one, and then Command or Ctrl+Clicking, if you're in Windows, on the second one. And now, I am going to go to the Tools menu, down to Photoshop, and choose Load Files into Photoshop Layers. That's going to load both of those documents, or both of those images, into a single Photoshop document, and it's going to put each one in a separate layer. So, here we go! I could also do that manually. I could load the first one, load the second one, select all, copy, paste it into the first one, whatever. I just need to be sure they're both in here.

I am going to hide this uppermost layer. And there, you can see the lower one. So, in this top one, this stuff is in focus. In the bottom one, this stuff is in focus. Now, as I turn that off and on, you can also see this whole structure here is shifting to the left. So, these images are out of alignment. I could manually align them by lowering the opacity on the upper layer, and then grabbing the Move Tool, and dragging it around until these are aligned.

There is an easier way to do it, and that is to, in the Layers Palette, select both layers, and go to Edit>Auto-Align Layers. Now, this only works with the last couple of versions of Photoshop. They are the only ones that have auto-alignment. So, I am just going to do that. It's going to ask me what algorithm I want to use for alignment. I am just going to choose Auto, say OK. And, with just a little bit of thinking, it has aligned my images for me. If I turn off the visibility on that upper one, you can see that they're sitting right on top of each other.

It's also possibly done some rotation, maybe even a little tilting. It's a very good alignment feature. Now, if I'm using a version that has auto-alignment, then I also have a way to automatically blend these together. We're not going to do that yet. I want to show you a completely manual way of doing it, just because if you don't have a previous version of Photoshop, you may not have that Auto option. And, even if you do have the Auto option, there are going to be times where it's nice to have a little more control. So, I'm selecting my upper layer here, and I'm going to add a layer mask to it. Down at the bottom of the Layers Palette, this button right here adds a Layer Mask.

Right now, the mask is white, which means every bit of this layer is visible. So, I am going to fill it with black. The easiest way to do that is to make sure that black is my background color, which I can do by clicking on that little thing right there. And, just having, and then hitting Command +Delete fills my layer mask with black. Now, no part of the upper image is visible. So, what I am left with is seeing the lower image, which is the part that has this bit in focus. If I now take my paintbrush and some white paint, and just start painting into my mask -- I am going to click that to make it selected, -- What I am now doing is refining my mask to reveal these bits of this upper layer, and these bits are in focus.

So, I am able to selectively paint in these focused areas of this other layer. Okay, that bit is not in focus. I've gone too far. So, I am going to switch back to black paint, and paint back over those. One of the things you'll find about depth of fields is very strange. It's sometimes difficult to tell where two different parts of your image actually sit on the same plane. Obviously, focus is all about distance from the camera. So, sometimes you'll think something should be in focus, and it won't be in a shot, and that's because it actually sits on a different plane than you're thinking it's on.

I think there is some focus out here to be had. There is a little bit out here. And in there, nope, it doesn't look like it. I am using the X key to switch back and forth between these two colors. That's a very simple way of going back and forth between black and white. So, that's looking pretty good. I've now blended these two different layers to get much deeper depth of field than I had before. These are now in focus; this is now in focus. Look at this stuff. It's not in focus. And, there is a little bit more to be had there than I thought, but there's not a lot.

What I needed was a third shot. And actually, that looks pretty good. Still, if I had done another shot focusing right in here, I would have gotten these things in focus, and maybe the edge of these petals. So, you'll often find that when you do your focus stacking exercises that it's hard to figure out how many layers you need to get the overlap. So, sometimes you may have to go back, and shoot again. You might be wondering, "What's all this checkerboard stuff?" Well, when I aligned the images, it had to move them. It had to shift them around, and so it's opened up a bunch of extra space in my document.

That's areas that the lower layer . . where the lower layer has no content. So, what I would like to do is restore those areas of the upper image. If that makes no sense to you, don't worry. It's about to, when you see what happens when I take white paint, and paint it to my mask right here. So, what you are seeing is that there is content in my upper image in these locations, just not in my lower image. So, I'm adjusting my mask to restore these bits of the upper image where there is data. That said, as you'll recall from the last movie, I intentionally shot this image a little wider than I needed to, because I wasn't sure how, when I refocused, how my crop was going to work.

So actually, my intent when I shot this movie was that it was going to need a crop. So, I am going to go to my Crop Tool here, and I am going to go ahead and pull in a 2×3 aspect ratio to preserve the original aspect ratio of my image. I am just going to crop this down, because this was the thing I was interested in anyway. So, now that lost space that I got from the stack doesn't really matter. So now, I can flatten and save, and then I've got an image with much deeper depth of field than I would have had if I was shooting a single image.

As I said, there's an automatic way of doing this, and there are lots of different ways of working with that, and we are going to spend the rest of this chapter looking at automatic focus stacking.

3/29/2013
It's a small world, and capturing it with a photograph can be challenging. In this course, photographer, author, and teacher Ben Long takes you on a fantastic voyage into the realm of the tiny, detailing the gear and shooting techniques necessary to capture extreme close-ups of everything from products to posies.

After touring the possibilities of macro photography, the course details essential gear at several price levels, including lenses, flashes, and other accessories. Next, Ben explores the special challenges of macro photography: dealing with moving subjects, working with extremely shallow depth of field, focusing, lighting, and more.

The course also explores advanced close-up tools and post-processing techniques, such as using Adobe Photoshop to "stack" multiple shots to yield wider depth of field than a single shot can convey.
Topics include: