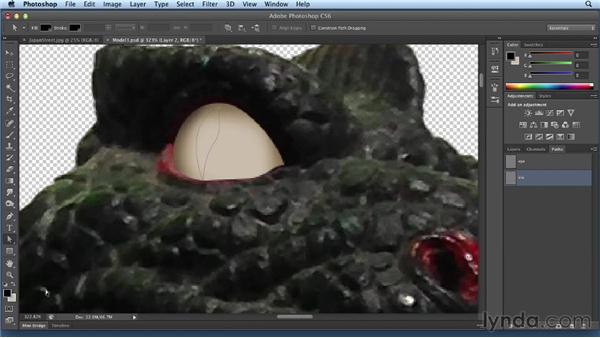 Join Bert Monroy for an in-depth discussion in this video Creating an eye, part of Creating Dreamscapes in Photoshop: 2.

Okay, so far little Godzilla's starting to look good, but you know when getting real close we'll go in here right into his face. And we see that that eye, that just doesn't quite get it, it really looks like a toy. So let's create our own eye to make it look a little better. I'm going to go in here and select that eye with the Pen tool. It'll go in there and just select the part of the eye that we see right there and go down here and just create that shape, go around and finish this guy off right through there.

So, go in there and just let's pull this guy down a little more, make this a little more of a curve here like this. And that's going to be the shape that I want right there. Alright, so I got that shape, we'll call this the iris. Alright, or actually in this case it could be the pupil itself you won't, you won't have an iris. Alright, so there's that and we're going to fill that with a black. So, that will fill in a new layer, we'll create a new layer right there on top and that layer will take that second path and fill it.

So there, now we're starting to get that whole effect in there. Now, that iris right now is kind of plain looking. So, what I'm going to do is I'm going to go into that layer and let's call it that, we'll call it the pupil. Alright, and this one we call The Eye. There, now our layers have names. Now, we're going to go into the pupil layer here and give it a little outer glow. Alright, and I don't want that color. What I want to do is I want to start getting a little weird here. So, I'm going to go in there and let's pick a kind of more of a yellowish color, like this.

That looks good and click OK. I'm going to change this to a multiply so that I can see it as such, there we go. And I just kind of spread it out just a little bit like that. And now I'm going to give it a little inner glow which right now is that color, but I want it to be more of a kind of a reddish tone. Maybe a deep red like that, and that's good, click OK. And that's starting to look better. So, now in a layer on top of all three of them there, is going to be some dark tones. Here's where I'm going to start to really give it some definition. So, I'm going to get a nice deep brown color. So, I'll get a nice deep brown like this and I have a much smaller brush. I'm going to go in here and start the paint right through here, let's get a really soft edge.

I'm going to start to paint some dark tones right through here, like so. Really dark, and bigger brush. And bring down the opacity a bit to about 50% and start adding more of these tones. Now you're saying, well, it's going all over the place. Well, that's okay, because what I'm going to do now is I'm going to use the base eye layer as a mask for the other two, by holding down my Option key and clicking between them which is going to trap them inside forming what's called a clipping group. And there you can see that now my dark tone is inside.

Now, a dark tone's a little too strong, so what I'm going to do is take that dark tone and put it in a multiply mode. And see what it is going to do. And see there, it starts to darken it really well and maybe bring down the opacity just a little. So, now our Godzilla is starting to look a little more ominous, as he starts to look more like the real monster. In the next movie, what we are going to do is take our new found monster and bring him into our street scene.