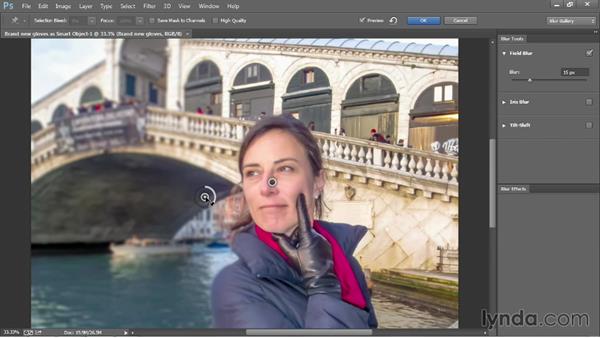 In this movie, I'll show you how to use the Field Blur filter to create a Depth of Field Effect. Now if you're working along with me, you'll want to open this image. It's called, Brand new gloves.jpg. And because it has Camera Raw settings assigned to it, it'll open automatically inside Camera Raw. Now, you may recall from a few chapters back that this image has a lot of posterization going on here inside the sky, up here at the top of the image. And I decided that the best way to deal with this posterization was to blur it away by creating a depth of field effect.

So, what we're going to do is blur the sky, we're going to blur the background as well and we're going to keep the model, Colleen in focus. Now because I want to assign field blur as an editable smart filter, I want to open this image as a smart object. So, you want to drop down here to the Open Image button and press the Shift key to convert it to an Open Object button and then click on it. So, Shift+Click on Open Object in order to open the image as a smart object here inside Photoshop. And next, I'll go up to the Filter menu, choose Blur Gallery and then choose the first command Field Blur.

And that goes ahead and brings up the Blur Gallery, which as you can see takes up the entire screen. Now, just so that I can get my bearings here. I'll press Ctrl+0 or Cmd+0 on the Mac in order to center the image on screen. And then, I'll zoom in a couple of clicks. Now notice that we start things off with a single pin, which not only determines the amount of blur which by default is 15 pixels as you can see in the upper right hand corner, but it also determines the position of the blur. Which may seem silly given that it's effecting the entire image to the same extent.

But you can add another pin just by clicking inside the image. For example, I'm going to click on the side of Colleen's nose here in order to add a pin at this location. And then I'm going to reduce the Blur value to zero. Either by modifying this value directly here inside the Field Blur panel or you can drag inside this ring around the pin. Now for a Blur of zero you want to drag almost directly up, not quite all the way up because if you go too far as you can see here, you're going to increase the Bur value considerably.

So, what I'm looking for is a Blur of zero at that location so that we keep Colleen's face in focus. And then I'm going to grab this guy and drag him to a different location. You can also nudge the pins around by the way, by pressing the arrow keys. So if you press an Arrow key, you're going to nudge the pin one pixel in that direction. If you press Shift along with an Arrow key, you'll nudge the pin in a larger increment. Anyway, I'm going to go ahead and nudge this guy down to let's say, right about there. Now at this point, we just have two pins.

So that means, anything from this point to the left is going to be blurred and anything from this pin to the right is going to be in focus. What we really want is blur all around Colleen's face. So I'm going to add a pin right there and I'll accept the default Blur value of 15 pixels. And I will add another one, lets say, right about there. And then I want to add one down here in the water, as well. Now that ends up creating a ton of blurriness here inside Colleen's jacket so I need to add some additional pins and set them all to zero, like so.

So I add one here on the collar, I'll add another one on the shoulder, right at this location here and dial it down to zero. And you have to do this manually for each and every pin, by the way. And so I'll go ahead and set another pin, right here in the gloves because after all, Colleen is modeling these gloves that I had just bought her at this point in time. So, I'll go ahead and dial that down to zero to keep the glove in focus. And then I'll add some blur point up here in the bridge because after all, I want the background to be nice and blurry. So I'll create a pin there and I'll create another pin here.

And I'm accepting the default Blur value by the way, of 15 pixels in these cases. And now notice that we've got this unrealistic amount of sharpness back here in the water. So I'll go ahead and set a pinned right there at this location and then I'll set another pin right there in order to blur away the background. And then finally, I want to create a bit of incremental blur right at this location here. So, I'll click to lay down a pin and then I'll go ahead and dial the value back to 10 pixels in order to create this reduced blur effect right here above the collar.

All right. Now, let's imagine that I'm pretty happy with what I'm seeing. In which case, I'll go ahead and click the OK button in the top right corner of the screen in order to apply my Field Blur effect as an editable smart filter here inside the Layers panel. And that friends is how you create a Depth of Field Effect in post using the Field Blur filter.